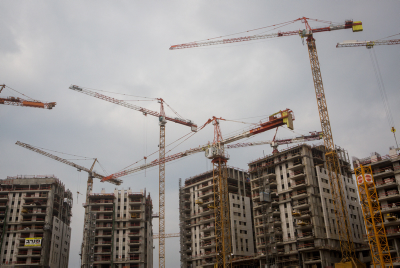 A near-riot broke out Friday outside the offices of a leading real estate firm after dozens of customers demanded a refund for deposits they made in a project being built by the company. In a statement to business daily Calcalist, the firm said that it would investigate the claims of each client and determine the merit of each request.

Many of the clients had deposited NIS 100,000 as a prepayment for eligibility in a new project being designed by the firm, which was, until recently, one of Israel’s most prestigious real estate developers. Last month, the CEO of the company was arrested on charges of tax evasion and fraud involving numerous deals handled by the firm. Also arrested was the CFO of the group, for allegedly assisting the CEO in covering up the fraud.

With news of the arrests, dozens of people who had paid the NIS 100,000 fee have been demanding their money back. Earlier in the week, the firm began cutting checks to those who demanded refunds, and as word got out, more clients demanded their money back – with dozens gathering outside the company’s offices Friday.

On Friday afternoon, the company said that it would stop transferring money to clients for the time being – creating a panic as  the crowd of worried clients continued to demand their money. Speaking to Calcalist, several clients said that they had been issued checks, but had been asked by the company not to cash them at this time. One who did try found that the check bounced.

In a statement, the company said that it planned “to fulfill our obligations to our clients and honor our commitments as we have in the past.”