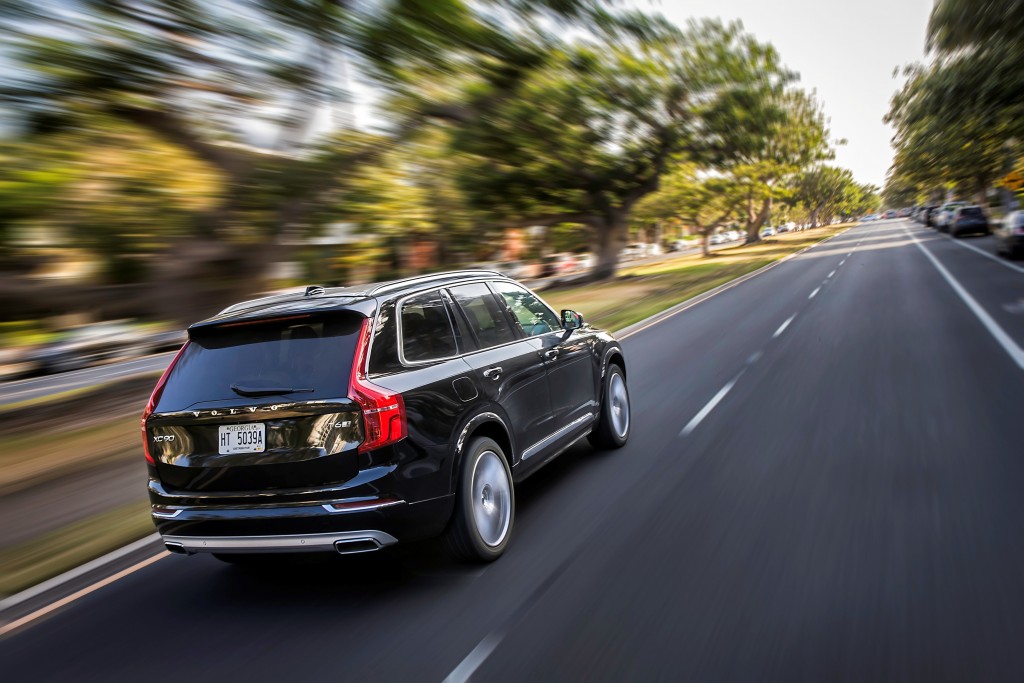 Volvo’s flagship XC90 is a large, luxurious land yacht. With seating for seven, a stately interior and the world’s best SUV safety rating, it’s like a comfy three-room apartment on wheels.

In other words, it’s a minivan — with all of the amenities, but none of the embarrassment, of driving that much-lampooned soccer mom-mobile.

Don’t get me wrong. Some of my best friends are soccer moms. I love minivans and have owned several.

My daughters’ childhoods were no longer nor more violent than normal, but we destroyed two perfectly good minivans before they finished middle school. By the time the girls left for college, both vehicles were totaled — from the inside, without ever having made contact with another car.

The XC90 is the first SUV designed and produced by Volvo since it was acquired by Chinese automotive giant Geely in 2010. It was reimagined from end to end — new drivetrain, new chassis, new braking and suspension systems, and new interior appointments. Among other things, it’s longer and wider than its predecessor.

Volvo calls it a “mid-size luxury SUV,” but it’s the biggest vehicle the company makes. And it’s big. At just under 4,700 pounds and 194 inches long, it’s almost the size of a Toyota Tacoma pickup truck — and longer than my last minivan.

But the supercharged, turbocharged engine gets that platform moving nicely. The engine may be a smallish two liters, but it makes 316 horsepower and 295 pound-feet of torque, and felt plenty beefy even in stop-and-go situations on the steepest streets.

The drive is a little stiff, true to Volvo heritage, and produces a smooth ride — but only on very smooth pavement. The handling, thanks in part to electric power-assist steering, makes the big car feel a little less so around the corners.

Outside, it’s a handsome hunk of car — a plumped-up version of Volvo’s XC60, with lower, longer lines than the smaller SUV.

Inside, it’s plush. The fit and finish are typically Swedish, and top-drawer.

The front seats are generous with head and leg room. The rear seats are capacious too, and are fitted with their own climate-control switches, reading lights and cup holders. (Heated front seats are standard; heated rear seats are an option as part of a package that also includes a heads-up windshield display and heated windshield washer nozzles.) The Bowers & Wilkins sound system boasts 10 interior speakers, with nine more in the premium sound package.

The third row features two smaller bucket seats that fold flat easily to turn the passenger compartment into enough cargo area to convert the rear of the vehicle into an Airbnb rental unit. The rental comes with a sunroof so broad and wide that you can sit and observe the entire Milky Way without moving your head.

Around town and on the highway, the XC90’s all-wheel-drive and T6 supercharged and turbocharged engine make for sure-footed maneuvering and snappy acceleration. Torque and handling sharpen with the change from Comfort to Dynamic driving modes. (There are also settings for Eco and Off-Road.)

As is fitting for a car of this legacy and price point — this is Volvo’s most expensive vehicle, with a starting MSRP of just over $50,000 — the XC90 includes many intelligent features as standard. The 9-inch touch-activated navigation screen is like a big iPad in the center of the dashboard, and is attached to an onboard Wi-Fi hot spot. (Make sure you have someone under 21 to teach you how to use these devices, which left me baffled.)

The headlights swivel as the vehicle turns. The “hill start assist” helps navigate steep streets. There’s a full-size spare tire below the rear cargo area, which opens and closes with hands-free electronics. The standard XC90 also comes with multiple 12-volt plug-in spots and a number of hook-holders to hang laundry — or maybe the hammock for that Airbnb rental unit.

A standard City Safety package includes an automatic braking system, which is one reason that the XC90 earned the Insurance Institute for Highway Safety’s highest award.

Not everything works as well as it could. The big off-road-capable tires sing loudly on the highway. The engine’s automatic stop-start system is meant to save fuel, but clunked annoyingly every time it kicked in. No matter how hard I tried, I couldn’t disengage it. (I was later told there is a way to do this using the navigation screen, but it has to be done again every time you start the car.)

The rear passenger doors lock automatically and cannot be unlocked from inside the vehicle, even using the key fob. I discovered this the hard way, and had to climb over the front seats to escape, while I was testing leg room in the back seats. (I was told the electric “child lock” was engaged. It cannot be disengaged from the back seat.) It made me long for the minivan days, when sliding doors allowed easy access to all three rows of seats.

Also, no matter how many times I dialed the sound system to one of Sirius XM’s channel 76, it kept reverting to Sirius XM channel 75. I concluded that this was further proof that the XC90 is a minivan.

The XC90 may cost considerably less than the equivalently equipped Range Rover, but it’s no economy car (though a two-row T5 version of this SUV can be had for less). With the requisite bells, whistles and safety features, the “Inscription” trim level model we tested checked out at $67,155.

Despite that figure, Volvo says the XC90 has become the company’s best-selling vehicle — and that the trim level most requested is the “Inscription” trim level, the highest in the XC90 range.

The new car contributed to Volvo’s record global sales in 2015, with total sales volume up 8 percent, including a 24 percent increase in the U.S.

Perhaps I’m prejudiced against Volvos. I owned only one, a used 240DL sedan that I should have attached a chain to and sold as a boat anchor. I’m sure it was among the safest vehicles on the road, because it spent most of its time off the road in the repair shop. I hated it.

But I didn’t hate the XC90. It would be easy to become accustomed to the salon-like interior and to forgive the poor 22 miles per gallon fuel economy. It might even be possible to accept myself as a “post-family” baby boomer, driving off into his sunset years in a Chinese-owned, Swedish-built SUV. Or minivan.