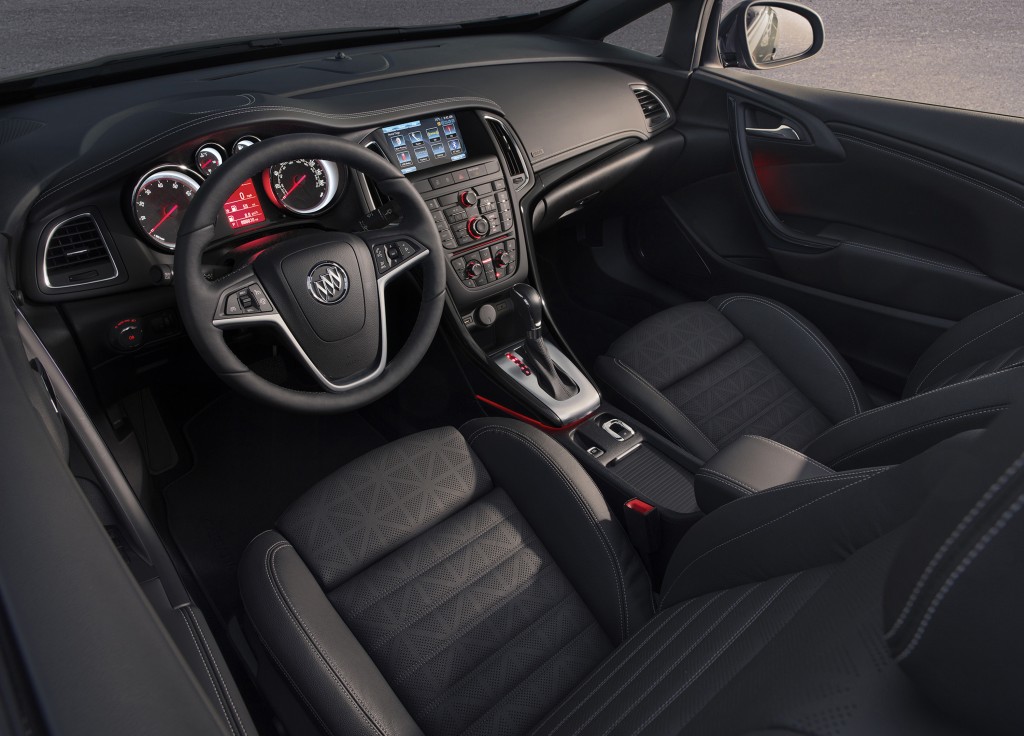 Buick is trying mightily to shed its image as a purveyor of sedate senior shuttles by rebranding cars from Opel, General Motors’ German subsidiary. With a quick bit of federalizing, an Opel Astra becomes the Buick Verano; the Opel Insignia becomes a Buick Regal and now, the Opel Cascada arrives as the 2016 Buick Cascada.

But Buick’s first drop top in 25 years shows that while it makes sense for GM accountants, it may not win over buyers’ hearts.

Inside, soft leather, contrasting colors and real stitching do lend the vehicle an upscale aura, a feeling enhanced by convenience features such as motorized arms that present seat belts to front seat occupants and a heated steering wheel. But as you live with the vehicle, you’ll find that all is not what it seems.

The instrument cluster consists of traditional gauges separated by a small, antiquated monotone screen that lacks the functionality of those found on Chevrolets. And the center of the instrument panel houses an astounding 45 tiny buttons and knobs that are impossible to operate at a glance.

The sea of switches is housed beneath a diminutive 7-inch touchscreen nestled inside an opening that’s too far from the driver’s reach. You can use the knob below it, but it has limited functionality. For example, it can scroll through a radio station list, but to select a station from the list, you must touch the screen. And the screen controls one function at a time, such as radio or navigation, but not both at the same time.

While the instrumentation is disappointing, the rest of the cabin fares better.

The front seats are firm and comfortable, although legroom is of the two-and-two variety, with good space up front, but little legroom in the rear unless front seat passengers surrender some. The cabin is peaceful with the top raised and civilized when it’s lowered. Perhaps most importantly, the Cascada’s top lowers in 17 seconds at speeds up to 31 mph.

When it does, trunk space diminishes from an acceptable 13.4 cubic feet to a marginal 9.8 cubic feet; only a carry-on bag or two will fit in the trunk; larger items will have to be stowed on the back seat.

A lot could be forgiven if the Cascada delivered exceptional performance, but it doesn’t.

Power comes from a 1.6-liter EcoTec turbocharged four-cylinder engine that produces 200 horsepower and 207 pound-feet of torque through a six-speed automatic transmission. Power delivery is smooth and refined, although it lacks the enthusiastic goading that one would expect. It’s exacerbated by the absence of steering wheel mounted paddle shifters or a sport mode. Although the automatic transmission can be shifted manually, the effort isn’t worth it.

Steering is quick and responsive, although handling limits seem only slightly above average, with a firm, well-controlled ride and minimal body lean through corners. Body rigidity is excellent, with little cowl shake evident over rough pavement.

Overall, performance is perfectly acceptable but not as sporting as Buick is trying to convey.

But the Cascada seems more like an attempt to expand the brand on the cheap and gain incremental volume rather than building a car that not only sells but enhances the brand’s reputation. Buick may tease us by showing sumptuous concept cars like the Avista and Avenir, but it won’t tempt buyers to opt for new Buicks if they’re little more than Opels, mundane cars that lack the Avista and Avenir’s appeal.

There’s no doubt that Buick execs would counter that building a new car from scratch in this segment is too expensive. But the Cascada’s plebeian European DNA is evident beneath its leather trim. No doubt this model will need rebates or rental fleet demand to maintain volume and profitability as the sophisticated buyers Buick seeks will not be fooled.

In the end, the Cascada is a German automotive Pygmalion with 20-inch wheels.

Clearly, GM can do better.