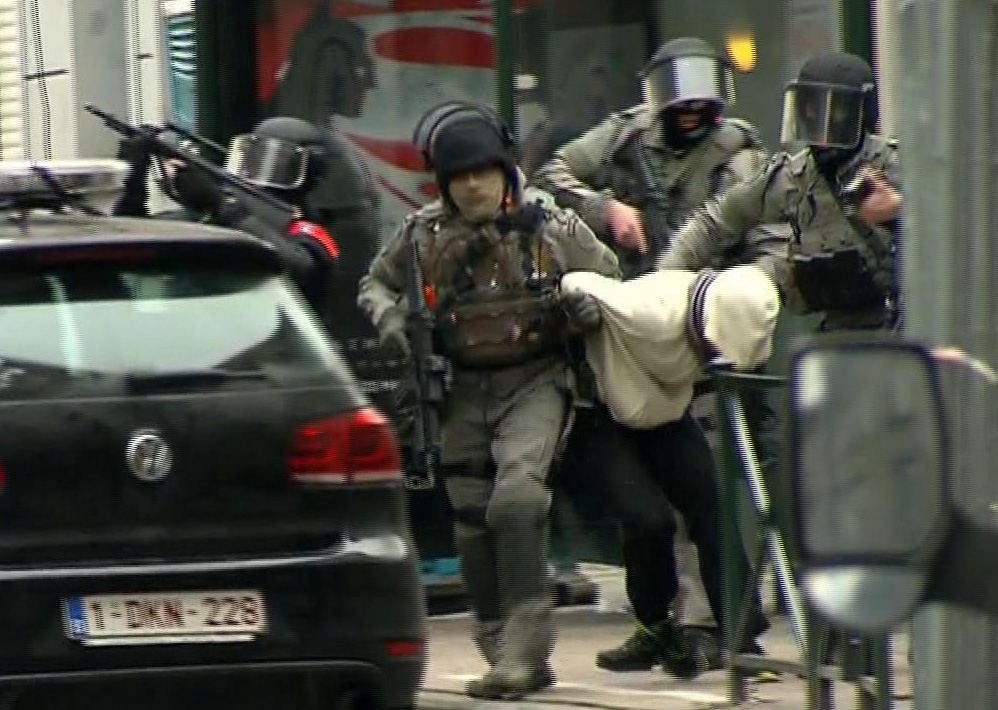 As the net closed in around Salah Abdeslam, Europe’s No. 1 fugitive was holed up, apparently anonymous, in an apartment in the place he knows best, the Brussels neighborhood of Molenbeek, a locale favored by several of the Paris terrorists.

Abdeslam’s four months on the run ended Friday when he was shot in the leg and dragged away in a white hoodie during a massive police operation in Brussels.

Authorities now need to piece together how the man who was at the Nov. 13 attacks that killed 130 people in Paris managed to evade authorities for so long. It appears, during the final stages at the very least, that Abdeslam was hiding only 500 meters (547 yards) from his parents’ home, the place where he grew up.

It remains unclear exactly where Abdeslam spent his days while on the run and how he evaded police for so long. Four other suspects were detained in Friday’s raid, including three members of a family that sheltered him.

The Belgian government said it realizes that support for Abdeslam may have been more widespread than initially thought.

“I always said that at the beginning we thought it was several individuals. Today we have to recognize that the number of people who support him is higher,” said Belgian Interior Minister Jan Jambon. “That doesn’t mean that the entire community supports him. But the support is a lot higher than I had estimated at the beginning.”

The 26-year-old is suspected of being the logistics man for the gang of Islamic terrorists who went on a rampage in Paris on Nov. 13, killing 130 people. Abdeslam is thought to have rented rooms, shopped for detonators and driven at least one of the terrorists from Brussels to Paris.

His lawyer, Sven Mary, told the Associated Press that Abdeslam “doesn’t deny he was in Paris.”

It remains unclear whether he was meant to become a terrorist himself.

Possibly his closest brush with police came in the immediate aftermath of the Nov. 13 attacks, when he and a group of contacts from Brussels were stopped at a French police checkpoint but let through. Since then, he has been only seen on wanted posters.

It would not have been hard for him to disappear in Molenbeek’s densely populated warren of narrow, cobbled streets and crumbling apartment blocks, where people with a Moroccan background form the vast majority of the population.

“Probably he had contacts with other men to help him,” Molenbeek Mayor Francoise Schepmans told the Associated Press. “But we have to wait. What’s important now is that Salah Abdeslam has been arrested.”

Abdeslam is expected to be extradited to France after questioning in Belgium. But his lawyer, Sven Mary, told reporters Saturday that his client will fight extradition efforts, speaking after he and Abdeslam met with a Belgian investigating magistrate.

Belgian prosecutors said earlier they were confident he would be extradited.

Meanwhile, Belgian Prime Minister Charles Michel warned that “the fight is not over,” and his government announced the nation’s terrorism alert level would remain unchanged at 3 on a 4-point scale.

After the hours-long police raid on Friday, life sought to recapture a semblance of normality in Molenbeek on Saturday.

Some neighbors were clearly shaken at the fact that the young man with French nationality but close ties to Molenbeek had been living in their midst despite the huge police manhunt.

“He was next to us, next to our kids. The most-wanted man was next to us day and night,” said Lamia, a 29-year-old mother of two young girls, who also declined to give her family name. She said she regularly visits her grandmother, who lives on a street near Abdeslam’s final bolt hole.

“When things blew up, it was shaking at our place. We were crying, the children were crying. Honestly, it’s a shock. He was two blocks away,” she said.