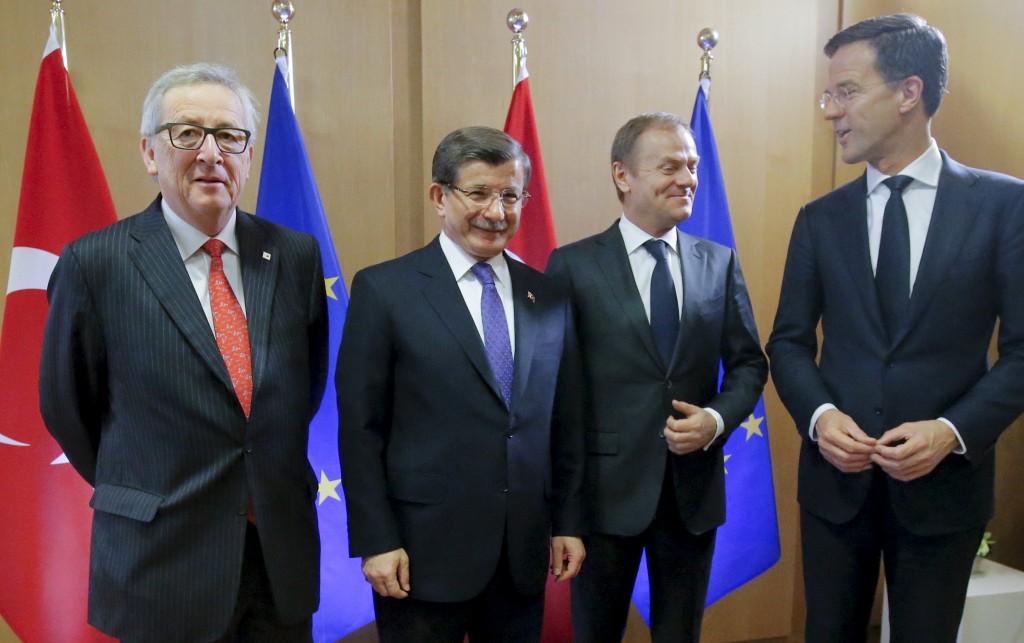 European Union leaders will try to convince Turkey’s prime minister to help end Europe’s migration crisis in return for financial and political concessions, but they remain unsure if Friday’s Brussels summit can clinch a deal.

A senior Turkish official told Reuters that Davutoglu would press the EU to open up new areas of negotiation on its long-stalled bid to join the bloc, despite a veto threat by Cyprus.

“We’re on the right track but we’re not there yet,” French President Francois Hollande told reporters after the first day of talks in Brussels. “I can’t guarantee you a happy ending.”

Turkish Prime Minister Ahmet Davutoglu said on Friday he hoped to achieve an agreement with EU leaders who are seeking to convince Ankara to help stem the influx of migrants into Europe.

“Of course the EU and Turkey have the same goal, the same objective to help Syrian refugees especially and also to have a new feature in our continents in a right manner. This is our purpose,” Davutoglu said on arrival for talks in Brussels.

“I am sure, I hope, we will be achieving our goal.”

Even if they can overcome possible Turkish objections, Thursday’s EU discussions revealed considerable doubts among the Europeans themselves over whether a deal could be made either legal in international law, or workable.

Over dinner, leaders gave EU negotiators a mandate to conclude an accord with Turkey by which it would take back all migrants who reach Greek islands off its coast. In return the EU would take in Syrian refugees direct from Turkey, increase aid for Syrians there, speed Ankara’s EU membership process and a scheme to let Turks visit Europe without visas.

Much of the debate, Merkel said, focused on ensuring that a plan that has outraged human rights agencies could ensure that those returned to Turkey, a country with a patchy and worsening record on the matter, would have their rights to asylum protected.

“An agreement with Turkey cannot be a blank cheque,” Belgian Prime Minister Charles Michel warned, echoing many colleagues who face complaints that Europe is selling out to anti-immigrant nationalists at home by outsourcing its problems to the Turks.

Outside the summit, rights group Amnesty International had planted a large screen in the middle of Brussels’ European quarter proclaiming “Don’t trade refugees. Stop the deal.”

Summit chairman Donald Tusk will open negotiations with Davutoglu in the morning, to prepare for a lunch meeting at which all 28 EU national leaders aim to wrap up a deal with the Turkish premier.

A major problem is Turkey’s four-decade-old dispute with EU member Cyprus, whose President Nicos Anastasiades insisted there could be no opening of new “chapters” in Turkey’s EU membership talks until Ankara allows Cypriot traffic into its sea and airports – a result of a refusal to recognize the Cypriot state.

After EU leaders told Tusk where they could give ground and where they had “red lines,” Anastasiades said he was ready to veto a deal if necessary.

There is anger in Nicosia at Merkel for appearing to make Davutoglu an offer last week without having consulted Cyprus at a time when talks on reunification with the Turkish-backed north of the island are at a delicately hopeful stage. Tusk, a former Polish premier, made clear Cypriot interests must be respected.

But Turkey is impatient with what it has called Cypriot “caprice” and a Turkish official in Brussels with Davutoglu said: “The EU has to see the big picture. … We think there are many steps to be taken for the opening of those [accession] chapters. And that is still our expectation.”

After a year in which more than a million people have arrived in Europe fleeing war and poverty in the Middle East and beyond, EU countries are looking desperately to Turkey to seal its coastline and stem the flow.

One senior EU official said that a lack of legal clarity in Turkey on the status of refugees from countries other than Syria – notably large numbers of Iraqis and Afghans – was a serious sticking point to Greece sending such people back.

Prime Minister Alexis Tsipras, facing a build-up of more than 40,000 refugees stranded in Greece by recent border closures in the Balkans, said his economically struggling country needed more help to care for migrants.

EU officials said Greece also needed time to set up legal and administrative structures to carry out the deportations, and to grant migrants individual asylum and appeal hearings.

Diplomats said talks among the EU states had watered down inducements to Turkey and included new safeguards intended to overcome legal objections to sending back migrants.

Ankara’s central objective – visa-free travel for Turks to Europe by June – will depend on Turkey meeting a raft of long-standing EU criteria. With French voters alarmed at the idea of 75 million Muslim Turks free to travel, Hollande stressed the need to fulfill all 72 prior conditions.

The draft, seen by Reuters, says the aim is “to break the business model of the [people] smugglers” and to offer migrants an alternative to putting their lives at risk. It stresses the return is “a temporary and extraordinary measure which is necessary to end the human suffering and restore public order.”

Leaders set no date to start the scheme. Some want all those arriving on Greek beaches from next Monday to be held for deportation, but Athens says it needs weeks to prepare. Yet such delay may trigger a rush to cross before Europe shuts down.

Merkel said any hold-up would create a “pull factor.”

She also said Europe must be ready to start resettling legal Syrian refugees directly from Turkey as soon as Greece starts sending them back to Turkey.