Politics ANALYSIS: Rubio Was Lifted by 2010 Wave, But Swamped by the ‘Tsunami’ of 2016
Politics 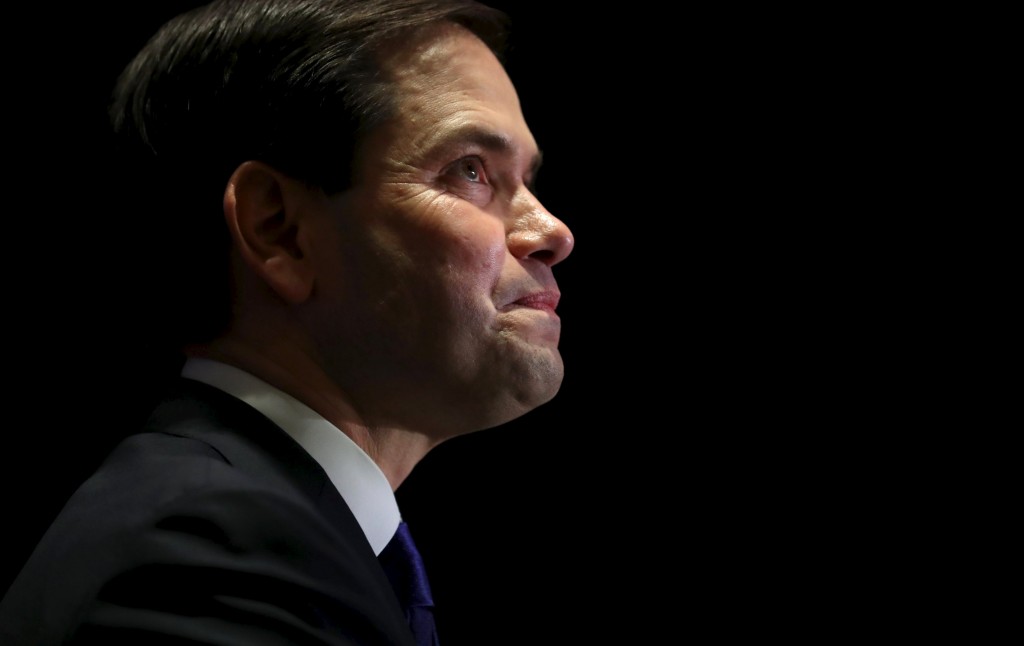 After Marco Rubio rode the tea party wave of 2010 to the Senate, he seemed confident he knew what needed to be done.

“What Americans are looking for desperately,” he said in an electrifying victory speech that blamed Republicans and Democrats for the country’s problems, “are people that will go to Washington, D.C., and stand up to this agenda that is taking us in the wrong direction and offer a clear and genuine alternative.”

On Tuesday night, Rubio took the stage again in his home state, this time humiliated – his presidential aspirations vanquished by the same voters who had propelled him just six years earlier.

The fresh-faced newcomer who promised to shake up Washington and remake the Republican Party was swamped by a wave even bigger than the one that boosted him in 2010 – a “real tsunami,” as he described it in his concession speech.

Now, the 44-year-old Rubio, who is not running for re-election to the Senate, faces an uncertain political future with no obvious path for a comeback.

To many Republicans here, Rubio’s devastating defeat in his home state to Donald Trump was the logical outcome for a politician who failed to follow through on his enormous potential – and never built a coherent, lasting coalition of supporters.

In Florida, Washington and the early nominating states, Rubio never constructed a base to keep him afloat when times were tough and lift him higher when they were good.

Rubio’s political identity was a blur. He had won in 2010 as a tea party hero, then worked with liberal Democrats on an immigration bill and then eventually emerged as the GOP establishment’s favorite presidential candidate.

As he ran for the White House, he tried to appeal to many different constituencies and geographic areas, often shortchanging his home state and leaving many activists and voters yearning for more attention.

He rarely toured his home state or championed local needs. He missed many Senate votes. And he struggled to cultivate alliances with Florida political leaders, many of whom were deeply loyal to Jeb Bush and felt bruised by Rubio’s fierce rivalry with the former governor in the GOP campaign

Levine, whose region is a crucial stronghold for the Florida GOP, added, “My relationship with Marco Rubio personally is minimal.”

As Mark Meckler, president of the conservative group Citizens for Self-Governance, put it: “He’s not purely an establishment guy – he was elected in the tea party wave. But he’s also not really of the tea party and never really has been.”

The result was that Rubio became the ultimate bandwagon candidate. When he was hot, voters gravitated to him. But he was no match for the allure of Trump.

His lack of a clear identity made it easier for opponents to brand him negatively, especially after Bush bowed out in February.

“As these other guys dropped out, people started seeing Marco as the establishment,” said Miami-Dade County Mayor Carlos Gimenez, who endorsed Rubio after Bush dropped out. “As these establishment candidates were still in, Marco was viewed as somewhat of a rebel.”

Just as frustrating, supporters said, was the lack of interest he showed in nurturing key relationships.

Alfonso Aguilar, president of the Latino Partnership for Conservative Principles who backed Bush and then Rubio, recalled that Bush’s campaign frequently reached out to Hispanic conservatives such as himself. But the only time Aguilar was able to reach the senator during his presidential campaign was by accident, aboard a flight to Miami when they ended up next to each other in first class.

“That was before the first debate,” Aguilar recalled. “But he seemed busy with his computer.”

During the first few months of his run, Rubio’s presence on the campaign trail was modest. He focused heavily on raising money, drawing criticism from opponents and even some supporters who argued that he wasn’t spending enough time meeting voters in Iowa, New Hampshire, South Carolina and Nevada.

Polls showed that Rubio was the second choice for many voters – a role he was content to play, believing that he would be poised to capitalize as the field narrowed.

He pitched himself to Christian conservatives, defense hawks and suburban centrists all at once, running nuanced ads that varied from one state to the next. His overarching message, promising a “new American century” – even though he held mostly orthodox Republican views – was meant to convince voters that he was fresh and likable, and that his opponents were not.

“It was natural for him to do it because it was real,” said Jacksonville Mayor Lenny Curry, a Rubio supporter who praised his attempts to unite different GOP factions.

But Rubio’s campaign was badly out of step with a restive Republican electorate, which was drawn to the candidates who seemed to capture the anger of the electorate – Trump and Sen. Ted Cruz (Texas). Rubio failed to adapt to the prevailing mood. He never seemed sure about how to deal with Trump’s unlikely rise, and his furious assault against Cruz fell short.

Rubio, in an interview before his Tuesday night defeat, defended his approach.

He said that, after New Hampshire and South Carolina, “everyone started to wake up to the reality that the majority of Republicans don’t want Donald Trump to be their nominee, but all those people are divided.”

So Rubio tried to ignore Trump.

“I’m out there carrying out my own message and trying to convince people to vote for me, not against someone else,” he said.

A turning point came in late February, when Rubio unleashed a furious string of personal attacks against Trump – first in a debate and then on the campaign trail. It was out of step with his self-described optimistic style, and it turned off many potential backers.

Rubio then drew the ire of Trump, who disparaged him repeatedly as “Little Marco,” turning the Rubio campaign’s branding of Rubio as the more casual “Marco” into a devastating effort to belittle him.

Five days after the debate, Rubio lost 10 of 11 states on Super Tuesday. Things got worse from there: Only Puerto Rico and the District gave him victories in the next two weeks.

Rubio’s strategists believe that the Super Tuesday losses and the defeats he suffered the following Saturday effectively ended his chances of competing for the nomination.

At that point, Rubio’s lack of deep support was becoming increasingly apparent.

Many of his most prominent supporters had only recently jumped on board, having waited until after Bush dropped out last month.

Rubio retuned to Florida in search of salvation. But what he found was a more hostile state than the one that had catapulted him onto the national radar. His crowds were small. Bush and many other Florida Republicans did not rise to his defense.

Meanwhile, a new wave fueled by anti-establishment anger had swept through Florida with Trump as its standard-bearer.

At the start of a campaign stop at a central Florida retirement community on Sunday, Rubio name-checked young rising Republican stars backing him – including South Carolina Gov. Nikki Haley and Sen. Tim Scott , R-S.C. – each from outside Florida. He mentioned Haley and the governors of Arkansas and New Mexico on Tuesday morning when a local news anchor asked whether he was upset Bush hadn’t endorsed him.

In ending his campaign Tuesday night, Rubio told supporters at Florida International University that he had endeavored to bridge divisions among Republicans.

His concession speech took place eight miles from the hotel ballroom in Coral Gables where he had declared victory in 2010.

In that speech, Rubio said he was aware that politicians often head to Washington and “they don’t come back the same way we sent them.”

To many Republican voters here, he fit that mold.

“I think Rubio was a better candidate when he was first running,” said Broward County GOP Chairman Bob Sutton, adding that he felt Rubio had “lost his human touch.”