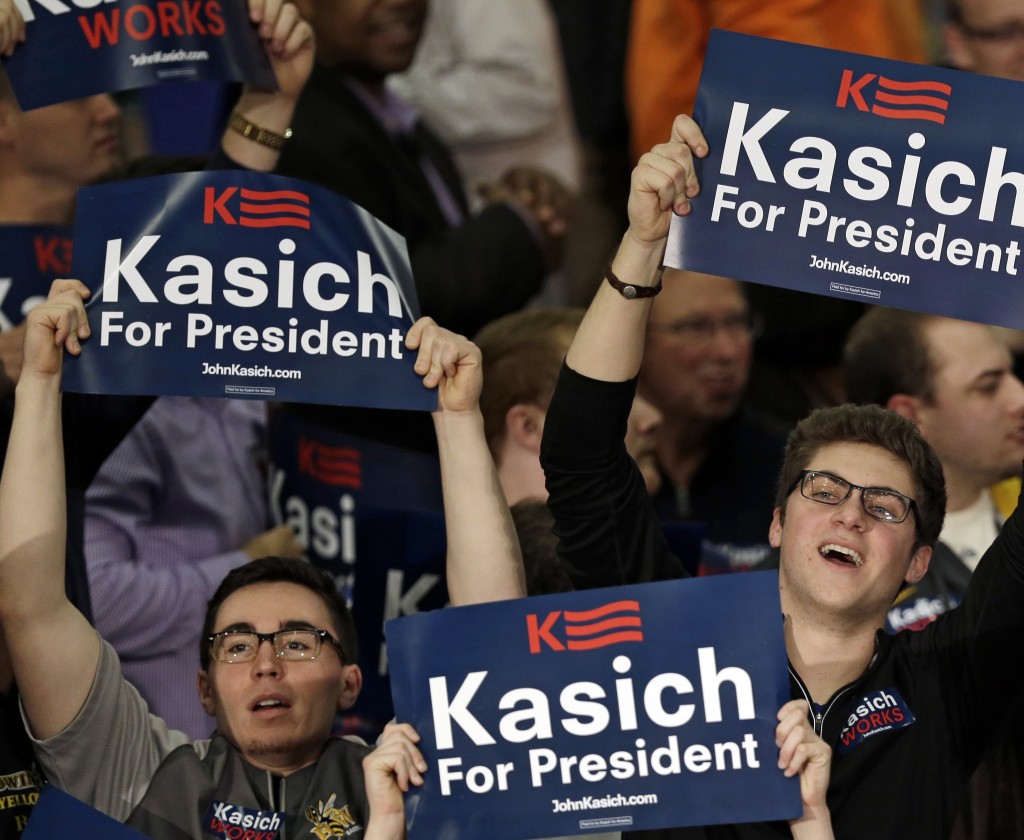 After a critical win on his home turf, Ohio Governor John Kasich begins a new phase of his long-shot presidential campaign that his aides hope will ultimately propel him past Republican front-runner Donald Trump by triggering a rare contested convention.

Kasich’s victory in Ohio’s primary on Tuesday, along with the departure from the race of U.S. Senator Marco Rubio, makes him the party establishment’s last hope of stopping the New York billionaire businessman from winning the Republican nomination for the Nov. 8 election.

Trump and his closest rival, Senator Ted Cruz of Texas, are deeply unpopular among Republican insiders.

“I want you to know, the campaign goes on,” Kasich, 63, told a victory rally near Cleveland. In a reference to Trump’s fiery campaign rhetoric, Kasich added, “I will not take the low road to the highest office in the land.”

Trump, 69, notched wins in Florida, Illinois and North Carolina on Tuesday and was projected by MSNBC to win a close race with Cruz in Missouri. But losing Ohio’s winner-take-all contest for 66 delegates complicates his attempt to clinch the 1,237 delegates needed to win his party’s nomination before the party’s July convention in Cleveland.

With most of the remaining states allocating delegates proportionally, Kasich’s aides believe he could prevail at a convention at which no candidate enters with a majority.

“The plan is to win Ohio, and some other states, and if that happens, nobody is going to have enough delegates to win the nomination on the first ballot,” said John Weaver, Kasich’s chief campaign strategist, who also worked on Republican Senator John McCain’s losing presidential campaigns in 2000 and 2008.

Kasich’s plan, according to aides, is to leverage the momentum to gather more endorsements from mainstream party insiders and Republican donors.

With the wind at his back, he hopes to score more victories in upcoming primaries including Pennsylvania, Maryland, Wisconsin, Connecticut and California, where he believes the terrain is friendlier to his brand of Republican moderation.

To become the nominee who faces Democratic contenders Hillary Clinton or Bernie Sanders in the November election, a Republican needs to win a majority of the 2,472 Republican delegates. After Tuesday night’s contests, excluding Missouri’s, Trump leads with 619 delegates, followed by Cruz with 394. Kasich has 136.

If no candidate reaches that threshold by the close of the last primary on June 7, the convention will almost certainly be contested – a recent historical rarity that would signal deep party rifts. No convention, by either party, has gone beyond a first ballot since 1952.

Kasich has almost no hope of winning enough delegates to secure the nomination outright. Ohio is the lone state he has won. But if he can succeed in blocking Trump from getting a majority, he can make a case to convention delegates that he is more electable than Trump or Cruz, 45, a conservative evangelical and, to date, Trump’s most successful Republican rival.

Signs of the Republican establishment rallying behind Kasich were on show this week. Mitt Romney, the Republican presidential nominee in 2012 who recently blasted Trump as a “fraud” in a scathing speech, campaigned with Kasich in Ohio on Monday.

“He has the kind of record that you want in Washington,” Romney said in North Canton, Ohio, on a stage next to Kasich, who spent 18 years as a Republican congressman and six as Ohio governor. “You look at this guy, and unlike the other people running, he has a real track record.”

On Wednesday, Kasich heads to a campaign event in Pennsylvania and then holds three events in Utah on Friday – where Romney, the former Massachusetts governor, is popular with Republicans. Utah, with 40 delegates, votes on March 27. Pennsylvania is one of five states voting on April 26.

Ford O’Connell, a Republican strategist who has stayed neutral in this year’s nominating fight, said Kasich’s victory should earn him more help from party insiders.

“There are really just two options left: Either Trump gets enough delegates, or nobody does,” O’Connell said. “Kasich’s win in Ohio means Trump must now win roughly 60 percent of the remaining delegates before the convention. I would say we now have a 50-50 chance of a brokered convention.”

O’Connell said that under Republican party rules, a candidate must receive a clear majority of primary votes overall to become the nominee.

The history of Republican nominating fights is littered with candidates who received a plurality of the votes, but not a majority, and never became the nominee.

Kasich’s aides are looking to history as a guide, particularly Wendell Willkie’s path to the 1940 Republican nomination. That year, three leading candidates – Robert Taft, Thomas Dewey and Arthur Vandenberg – each arrived at the convention without enough delegates to win.

Willkie – a businessman and former Democrat who had never before run for public office – opposed the Republican Party’s isolationists and was a supporter of Britain’s war efforts. His cause gained momentum after the Nazi blitzkrieg in Europe in May 1940.

After six ballots at the convention, delegates in Pennsylvania, New York and Michigan deserted other candidates and switched to Willkie, giving him victory.

Trump, Cruz and Kasich could face the same scenario this year, which would force them to lobby delegates on the convention floor until one emerged with a majority.

“A lot of people who do not want Trump have been sitting back to see how Kasich and Rubio do in their home states on Tuesday,” said Republican strategist Charlie Black, who signed up on Tuesday night as a Kasich adviser.