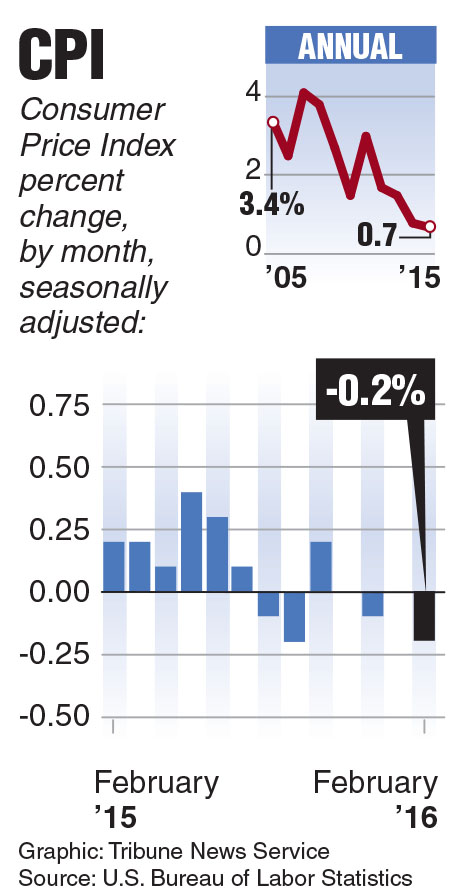 The consumer price index, a key indicator of inflation, declined 0.2 percent last month after being unchanged in January. It was the third decline in six months.

A 13 percent drop in gasoline prices more than offset other rising costs, including food, apparel and medical care.

Aside from food and energy, so-called core prices increased 0.3 percent for the second straight month in February.

For the 12 months ended Feb. 29, core prices increased 2.3 percent. That was the largest 12-month gain since May 2012, the Labor Department said.

Core prices have been rising steadily in recent months, a sign that underlying inflation is picking up.

Federal Reserve policymakers want to see overall prices rising 2 percent a year, and the latest reading on inflation could push the central bank toward another interest rate hike.

Fed officials conclude a monetary policy meeting Wednesday but are expected to keep their key short-term rate steady when they announce their latest action.

Fed Chair Janet Yellen is scheduled to hold a news conference, and she’s likely to be questioned about her expectations for inflation.

Chris Rupkey, chief financial economist at Union Bank in New York, said it was “pretty incredible that Fed policymakers are widely expected to do nothing at Wednesday’s meeting” given more signs of rising inflation.

“To pretend inflation is too low just because the oil crash lowered gasoline prices … currently seems intellectually dishonest to say the least,” he said.

The Fed uses a different inflation measure, based on personal consumption expenditures, that tends to run lower than the consumer price index. Core prices using that measure were up 1.7 percent for the 12 months ended Jan. 31, the latest data available.