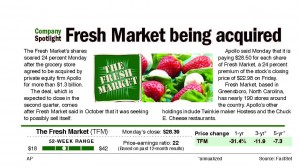 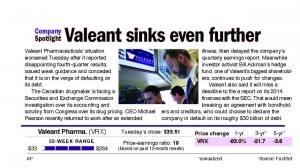 Stocks ended mixed and mostly lower on Tuesday, led by a steep decline in drug-company shares as investors worried that it will become harder for the companies to raise prices. Materials companies fell along with the price of precious metals.

U.S. stocks have hardly moved over the last two days, following a four-week rally that erased some big losses from earlier this year.

“People are kind of reevaluating where we are,” said James Paulsen, chief investment strategist for Wells Capital Management. “It’s kind of amazing we haven’t pulled back a little more.”

Trading has been mixed and fairly calm this week as investors waited for the Federal Reserve Open Markets Committee’s remarks on interest rates and the economy on Wednesday. Investors were also awaiting Wednesdays’ Consumer Price Index report, which Paulsen believes will reveal more than the Fed’s statement.

“We ought to be paying attention to the Fed’s boss, the economy,” he said. “If the economic data gets better, the Fed will raise rates. If it doesn’t get better, they won’t.”

Drug-company stocks were not afforded any of the market’s tranquility Tuesday. They were pummeled after Valeant Pharmaceuticals, which is already facing scrutiny over its business practices, said its strategy of boosting product prices is no longer viable. Every drug company in the S&P 500 fell, and big drugmakers Pfizer and Merck led decliners on the& Dow.

Valeant tumbled $35.53, or 51.5 percent, to $33.51 after it disclosed disappointing fourth-quarter results, cut its forecasts for 2016 and said it could default on its debt. Valeant is being investigated by the Securities and Exchange Commission, and Congress is questioning its practice of acquiring older drugs and raising their prices, a strategy shared by other drugmakers.

Drugmaker Eli Lilly fell on concerns surrounding the potential approval of a drug designed to treat dementia caused by Alzheimer’s disease. The company said on Tuesday that it is changing the goal of a late-stage trial. Investors worried that the change makes it less likely that regulators will approve the drug. The stock gave up $2.67, or 3.6 percent, to $71.24.

Tech stocks made the biggest gains on Tuesday, led by Apple, which rose $2.06, or 2 percent, to $104.58 after a Morgan Stanley analyst said first-quarter iPhone sales look stronger than Wall Street had expected.

The Bank of Japan left its monetary policy unchanged Tuesday but downgraded its assessment of conditions in the world’s third-largest economy, citing risks from weaker growth in China and other emerging economies and volatility in financial markets, among other factors. Tokyo’s Nikkei 225 lost 0.7 percent, and Hong Kong’s Hang Seng declined 0.7 percent. Seoul’s Kospi was off 0.1 percent, and the Shanghai Composite Index gained 0.2 percent.