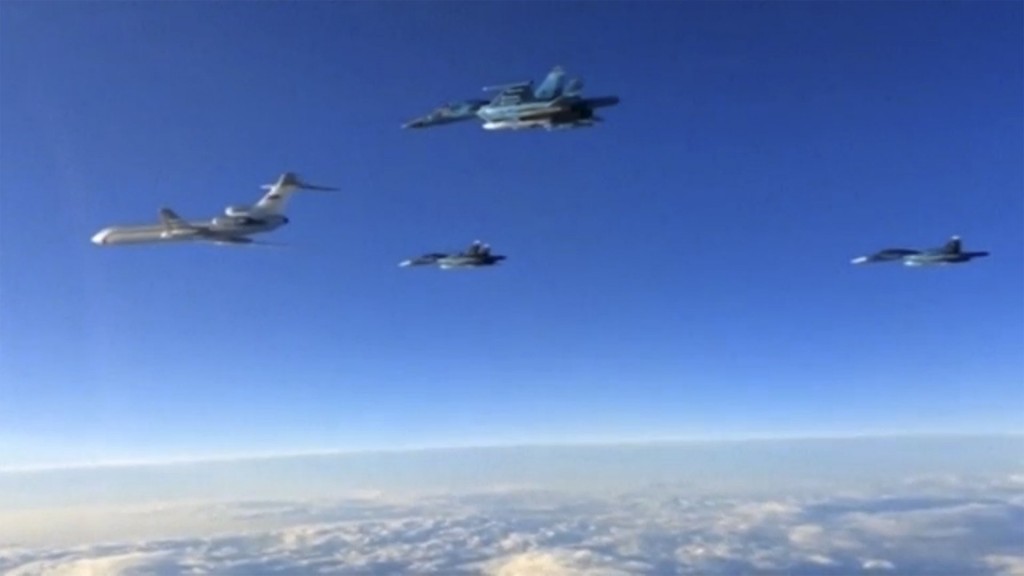 Russian warplanes began leaving Syria on Tuesday as Moscow started to draw down forces that have tipped the war President Bashar al-Assad’s way, and the U.N. envoy said he hoped the move would have a positive impact on peace talks under way in Geneva.

As the first aircraft touched down in Russia, U.N. envoy Staffan de Mistura called it a “significant development” and said he hoped President Vladimir Putin’s move would advance progress towards a solution and a peaceful political transition in Syria.

Putin’s announcement of the withdrawal of the “main part” of Russian armed forces in Syria has led Assad’s opponents to speculate Moscow may be trying to press him towards a political settlement, though Damascus has dismissed any talk of differences with its ally and says the move was coordinated.

It was unclear what the withdrawal would mean for the outcome of the war or for the future of Assad.

The talks under way in Geneva are part of a diplomatic push launched with U.S.-Russian support to end the five-year-long war that has killed more than 250,000 people, created the world’s worst refugee crisis, and allowed for the rise of Islamic State.

U.S.-Russian cooperation had already brought about a lull in the war going into the talks via a “cessation of hostilities agreement” that led to a sharp decline in fighting between rebels and the government in western Syria.

But the Syrian government, which had been losing ground to rebels before Russia intervened, had indicated it was no mood to compromise on the eve of the talks, calling the presidency a “red line” and ruling out a negotiated transfer of power.

The main opposition delegation wants Assad out of power by the start of a political transition. While some rebels have expressed guarded optimism at Putin’s announcement, others doubt Moscow is about to abandon the Syrian leader.

Russian media showed the first group of Russia’s Su-34 fighter plane task force returning from Syria and landing at an air base in southern Russia on Tuesday.

At least six pilots in white helmets and aviator jackets were seen departing from about three planes.

They were mobbed by the crowd before being thrown in the air in celebration. A brass band played Soviet military songs, including the Russian national anthem.

Russia said however that it would keep its most advanced air defense system, the S-400, inSyria.

The Russian air campaign that started at the end of September has focused mostly on terrorists battling Assad in western Syria, helping Damascus and allies including Lebanon’s Hizbullah and Iranian Revolutionary Guards to reclaim important ground near the borders with Turkey and Jordan.

The spokesman for a rebel group in Latakia, where fighting has raged throughout the truce, said he did not believe the Russians were changing course. “We do not trust them,” said Fadi Ahmad of the First Coastal Division rebel group.

Salim al-Muslat, spokesman for the main Syrian opposition alliance in Geneva, said: “We heard the decision, but hearing is different from seeing on the ground.”

Showing Russian warplanes were still active in Syria, heavy Russian air support was reported to help the Syrian army make major gains against Islamic State near the ancient city of Palmyra. IS is not included in the cessation of hostilities.

Putin and U.S. President Barack Obama spoke by telephone on Monday about Syria, with the Kremlin saying the two leaders “called for an intensification of the process for a political settlement” to the conflict.

Putin said Russia had largely fulfilled its objectives in Syria. But he gave no deadline for the completion of the withdrawal and said forces would remain at a seaport in Tartous and at the air base in Latakia.

The Russian intervention, supplemented by ground troops from Iran, helped Assad to halt and roll back terrorist advances that were seen as an increasing threat to his grip on power in the main cities of western Syria, including Damascus, last year.

A Western diplomat said Putin would “now move to focus on the peace talks and this will put pressure on the Syrian government to negotiate.”

“We don’t know if he is giving up on Assad but we know that the Russians are delivering a message to Assad that they are keen on negotiations over transition to proceed,” the diplomat said.

Russia has previously called on Syria to prepare for parliamentary and presidential elections. On the question of Assad, Moscow has said it is up to the Syrian people, not outside powers, to decide.

Syrian opposition figure Maan Abdul Salam said: “I don’t think Russia is giving up on Assad yet. It is changing its tactics and the opposition needs to be ready for all possibilities.”

Senior Iranian official Ali Larijani said after talks in Tehran with a Syrian delegation that his country would keep up its support for the government in its “confrontation with terrorism,” the Syrian state news agency SANA reported.