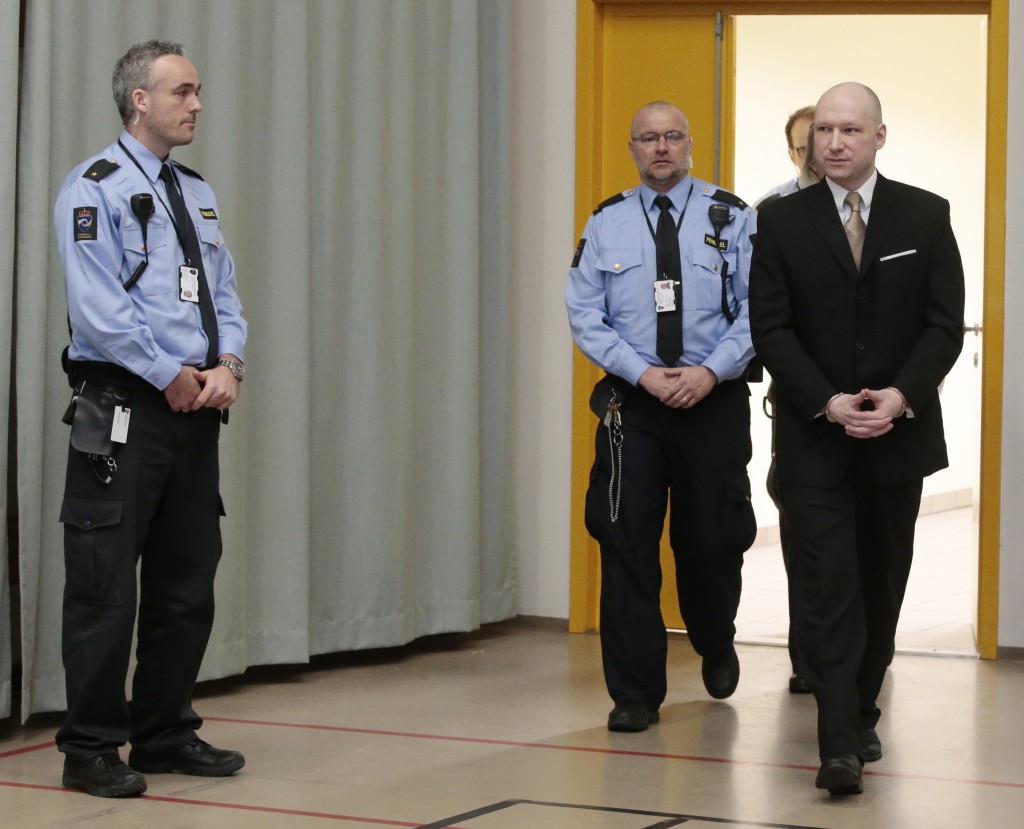 Mass killer Anders Behring Breivik made a Nazi salute at the start of a court case on Tuesday in which he is accusing the Norwegian state of inhuman treatment by keeping him in isolation after he massacred 77 people in 2011.

The neo-Nazi terrorist appeared in public for the first time since his 2012 trial. In that time, he has had just one visitor, his mother, who was allowed into prison shortly before she died of cancer in 2013.

Wearing a black suit, white shirt and golden tie, the 37-year-old raised his right arm in a Nazi salute as he arrived. He did not say anything. He had shaven off a beard and short blond hair since the previous trial.

It was considered too dangerous to hear the case in Oslo so the court is sitting inside the prison’s gymnasium, whose walls are lined with timber wall bars and a climbing wall, as well as two basketball hoops.

Breivik will argue that his isolation in Skien jail violates a ban on “inhuman and degrading treatment” under the European Convention on Human Rights, and also deprives him of his right to family life.

“He wants contact with other people,” his lawyer, Oeystein Storrvik, told reporters before the March 15-18 trial.

Oslo’s office of the Attorney General says there is no case to answer, saying in pre-trial documents: “there is no evidence that the plaintiff has physical or mental problems as a result of prison conditions.”

Storrvik claims that one sign of Breivik’s suffering is his inability to concentrate on the university studies he began by correspondence course last year.

The judge’s verdict (there is no jury) will be issued in coming weeks.

Breivik killed eight people with a bomb in Oslo on July 22, 2011, and gunned down 69 others on a nearby island, many of them teenagers. He is serving Norway’s maximum sentence of 21 years, which can be extended.

In prison he has a three-room cell with a computer but no Internet access. He is allowed out into a yard for exercise. He only meets guards and medical personnel – even his lawyer has to speak to him through glass.

Norwegian authorities note that in a manifesto about his anti-Muslim views, Breivik wrote that “prisons are considered an ideal arena for which to recruit for political purposes.” They do not want him to recruit any of the other inmates to his views. In addition, the authorities fear that other inmates might attack him.

If he fails in the Norwegian courts, Storrvik may take the case to the European Court of Human Rights

In 2014, that court sanctioned Turkey, for instance, for inhuman treatment of Abdullah Ocalan, founder of the Kurdistan Workers Party. Ocalan was kept in isolation in a Turkish prison for a decade until 2009.

By contrast, in France, jailed guerrilla mastermind Carlos ‘the Jackal’ lost his case when he complained of inhuman treatment in 2005. The court ruled he had sufficient access to people – family and lawyers – even though he was segregated from other prisoners.