World Cyprus and Turkey at Odds, EU Refugee Accord at Risk
World 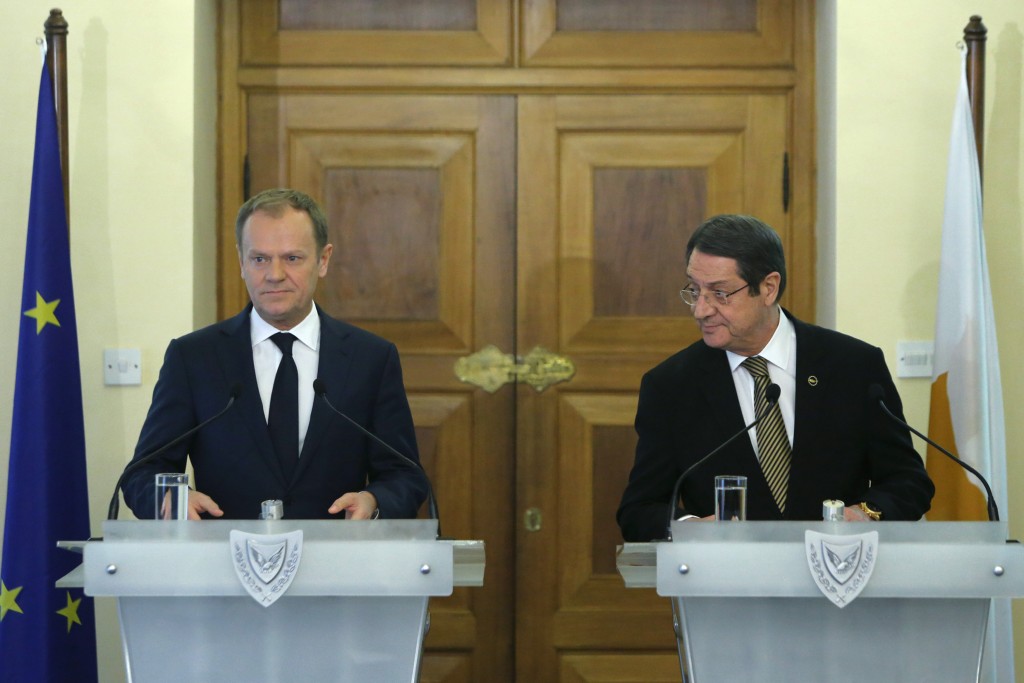 The Cypriot government said on Tuesday it could not consent to the European Union entering a new phase with Turkey in its bid to join the bloc – a position that may scupper an accord between the EU and Ankara on stemming the influx of refugees into Europe.

Turkish Prime Minister Ahmet Davutoglu told EU leaders last week that Ankara was willing to take back all refugees and migrants who enter Europe from Turkey in the future, in return for financial aid, faster EU entry talks, and quicker visa-free travel for its citizens.

But Nicosia, the capital of Cyprus, has been at loggerheads with Turkey since the 1974 Turkish invasion partitioned the island into two sectors, the Greek Cypriot side recognized internationally as Cyprus, and a breakaway Turkish Cypriot state.

Recognizing the potential problem, EU Council President Donald Tusk visited Nicosia on Tuesday and was due to meet Turkish Prime Minister Ahmet Davutoglu later in the day in Ankara.

“I conveyed to President Tusk our position that the Republic of Cyprus does not intend to consent to the opening of any chapters if Turkey does not fulfill its obligations as described in the negotiating framework,” Cypriot President Nicos Anastasiades told reporters after a meeting with Tusk.

As an EU member, Cyprus has frozen a number of negotiation “chapters” that Ankara must address and resolve in order to qualify for EU membership. This decision is a direct result of Turkey’s failure to open its ports and airports to Cypriot traffic.

Peace talks to resolve the Cyprus issue are now underway between the Greek and Turkish Cypriot sides, but Turkey, which maintains more than 30,000 troops in northern Cyprus, is instrumental to any peace accord.

EU leaders  hope to work out details on the refugee accord with Turkey by the next scheduled summit on Thursday and Friday.

“The Turkish proposal worked out together with Germany and the Netherlands still needs to be rebalanced so as to be accepted by all 28 member states and EU institutions,” Tusk said.

Anastasiades said that Turkey’s proposal was inadvertently putting Cyprus on a ‘confrontation’ course with Ankara, a course that his government had not intended. “In fact, any confrontation with the Turkish government, particularly at this critical stage in the negotiations, is the last thing we are looking for,” he said.