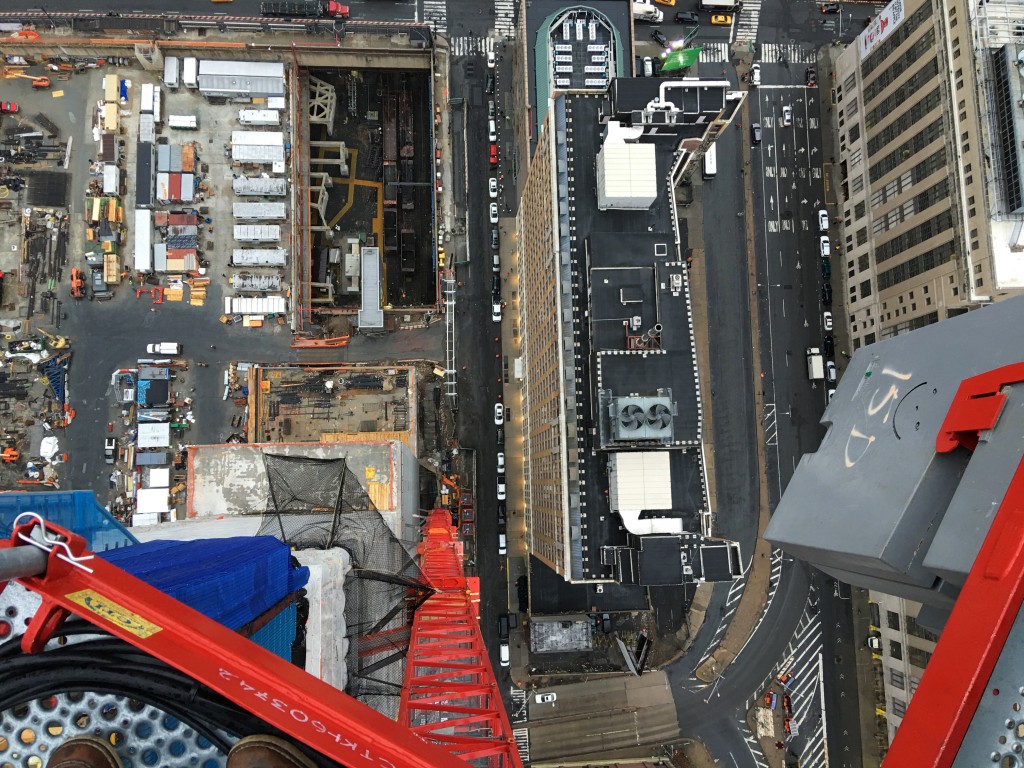 Tommy Gambardella is a master of New York’s construction universe.

Each morning before dawn, he rides an elevator more than 50 stories up the side of a skyscraper growing on Manhattan’s West Side. Then, he steps out onto a narrow walkway with a breathtaking view of the city below and mounts some spiral steps into the glass control cab of a tower crane.

There, he’s alone, in silence.

From high in the sky, he can see the sun light up Manhattan all the way to the harbor and the Statue of Liberty. He wraps his fingers around two joysticks to bring the crane alive.

Gambardella, 49, is at the helm of one of the giant tower cranes sprouting across the city, a prime force in a building boom that is changing New York’s skyline. It can be dangerous work — a fact hammered home by several deadly accidents in recent years.

“Is it a thrill? I love it. I love it. I absolutely love it,” he says after climbing from the translucent fishbowl of his control cab, atop what will be a 65-story apartment tower. “But you need to have a little more nerve than the average human being, and be a little crazy.”

New York is enjoying a construction bonanza following a recession that choked new investment for years. The city has issued permits for about $35 billion worth of both residential and commercial construction in the past year.

Fifty-five tower cranes and 26 smaller, “crawler” cranes are now in use, licensed by the city — about twice as many as two years ago, according to the Department of Buildings.

Standing on the sidewalk, it is hard not to be awed by, and a little frightened of, the supertall cranes hoisting loads of steel into the sky.

In 2008, a 250-foot-tall tower crane collapsed on Manhattan’s East Side, obliterating a building below as it fell. Seven people died. Just two months later, two workers were killed when a 200-foot-tall crane fell over and struck an apartment building across the street. Last year, seven people were injured when an air-conditioning unit weighing tons came untethered from a crane, plunging 28 stories to Madison Avenue.

More recently, on Feb. 5, one of the city’s crawler cranes toppled in gusty winds killing a pedestrian.

That accident again brought attention to crane safety. Last year, the city hired 50 new construction inspectors for a total of about 450.

People’s lives depend on crane precision, because “you can’t have anything falling out of the sky,” says Bobby Cipriano, a veteran operator in charge of crane safety and maintenance at the $4.5 billion Brookfield Property Group development, called Manhattan West, where Gambardella works.

“Tower cranes are intimidating, and you have a tremendous responsibility,” Cipriano says.

Before the crane moves, his dawn routine includes turning on the generator that powers the electric crane and inspecting cables attached to the boom. He also checks the radio equipment that allows the operator to contact crew members on the ground.

Hoisting loads is a matter of trust. From the sky, the men on the ground look like ants, preparing loads the operator hoists skyward on a cable he cannot always see.

“You can feel it. You can feel when it comes up and the signalman says, ‘Great, that was nice,’” says Cipriano.

What none of them trusts is the wind.

When it reaches 30 mph, “you’re getting blown around, knocked around,” says Gambardella. “It’s very difficult to control the crane, and the load.”

Not everyone is fit for the precarious work.

“You’ve got to have a certain disposition — everything calm, no yelling, no screaming,” says Gambardella.