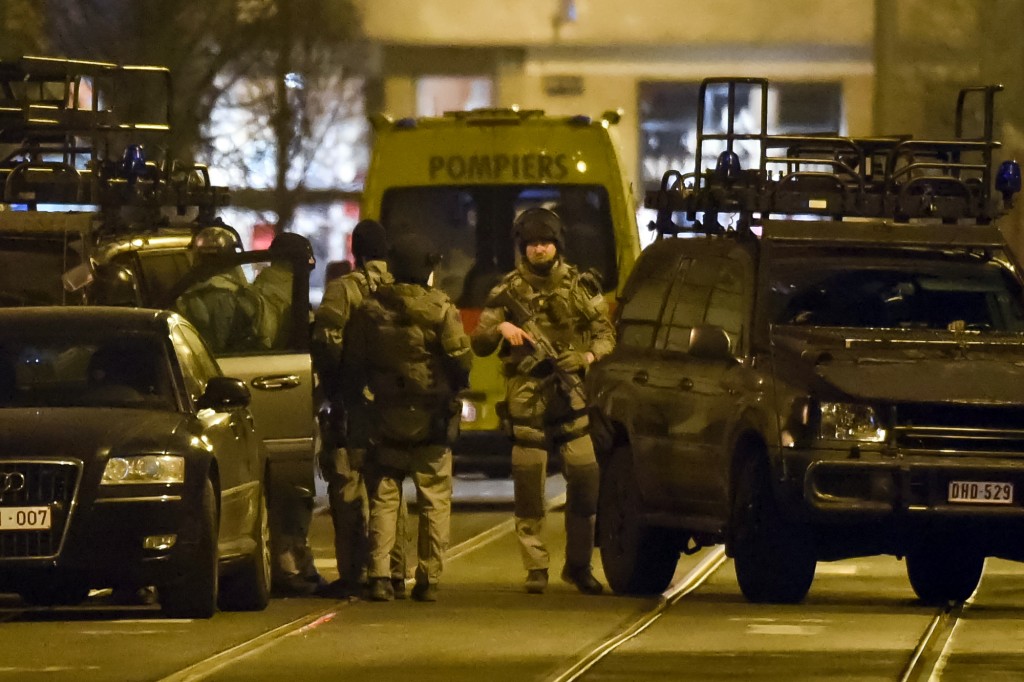 Belgian and French police investigating a suspected link with the November attacks in Paris stormed a Brussels house Tuesday after being fired upon, and killed a suspect armed with a Kalashnikov assault rifle, authorities said.

Three Belgian and one French police officer were slightly wounded in the operation.

“We had a lot of luck,” Belgian Prime Minister Charles Michel said. “It could have been a drama.”

One police officer was wounded on his ear right under his helmet, and another was injured when his service weapon was struck by a bullet.

The major anti-terror operation, which lasted more than three hours, paralyzed an entire neighborhood of the Belgian capital, with schools and a day-care center placed on lockdown and autoworkers at a nearby Audi plant instructed by management not to leave.

The operation brought back memories of the anxious days the Belgian capital lived through in November and December, when the subway and schools were closed for a time, and the Dec. 31 fireworks display was canceled because of the threat of terrorist violence.

Since it was unclear whether other terrorist suspects remained at large late Tuesday, police operations were continuing.

“The investigation is actively proceeding night and day,” the Belgian Federal Prosecutor’s Office said in a statement. It said that additional details of the Franco-Belgian operation would be made public at a news conference Wednesday morning. It said efforts were still underway to identify the slain suspect.

Prosecutor Eric Van der Sypt said that when gunshots rang out, many people fled, and it was too early to say if some were suspects or all were innocent bystanders simply trying to escape.

The anti-terror raid in the Forest neighborhood was linked to the Nov. 13 gun and suicide bombing attacks on a stadium, cafes and a concert hall in Paris that left 130 people dead. Yet police didn’t expect violent resistance Tuesday, the prosecutor said. That indicated that they weren’t targeting a major suspect like Salah Abdeslam, who fled Paris and remains on the run. Most of the Paris attackers died that night, including Abdeslam’s brother Brahim, who blew himself up.

More than four months on, Belgian police and magistrates are still piecing together the role Belgian nationals and others living in this country played in aiding the Paris attackers.

The suspected ringleader of the November bloodbath was a Brussels resident, Abdelhamid Abaaoud. Another attacker, Bilal Hadfi, was said to have lived for a time in the Forest neighborhood. Hadfi blew himself up outside a stadium in the northern Paris suburbs and Abaaoud was killed in a police raid on a nearby house days later.

On Tuesday, the Forest neighborhood was locked down for five hours after the initial burst of gunfire. Three of the police officers, including a French policewoman, were wounded when they were fired upon after opening the door of the apartment in the Rue du Dries they had come to search. The fourth officer was wounded in a later exchange of gunfire.

After the first gunshots, police sealed off a wide perimeter around the multicultural neighborhood to keep journalists and curious residents at a safe distance. A helicopter hovered overhead as officers looked for at least one other suspect they believed might have escaped. Several hundred spectators gathered, hooded officers wearing body armor milled about and ambulances stood at the ready.

Belgian authorities have stepped up their counterterror efforts since a lone gunman killed four people at the Brussels Jewish museum in May 2014. The small western European country has also been prime recruiting ground for the Islamic State terrorist group, and officials freely acknowledge their concerns about what radicalized recruits might do after returning home from the battlefields of Syria or Iraq.