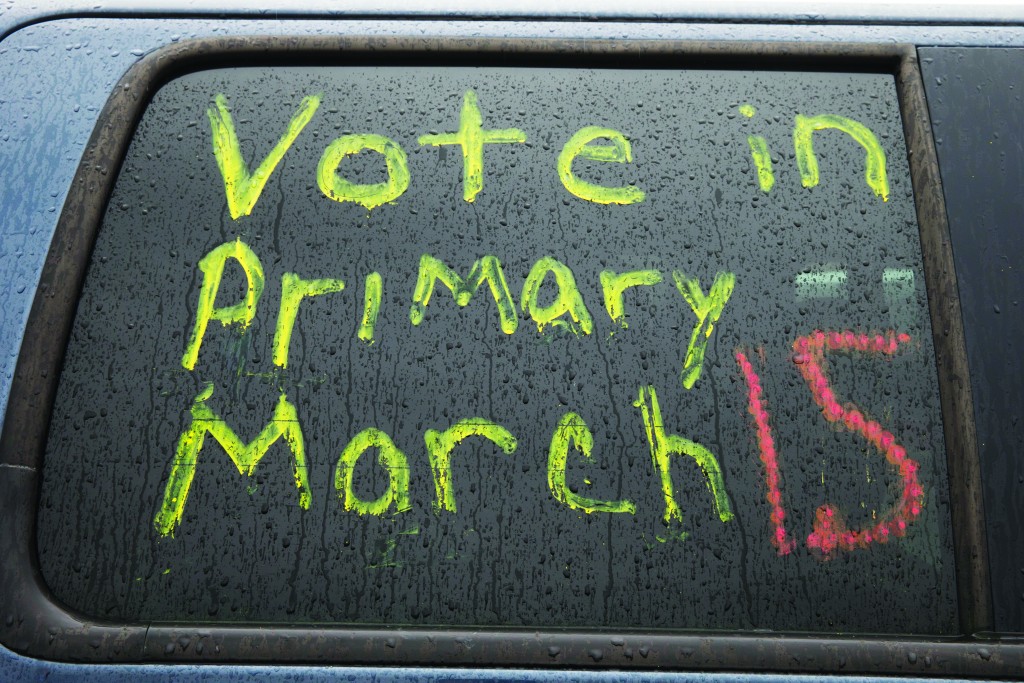 At the next major crossroads in the wild primary race of 2016, the five states that go to the polls on Tuesday, March 15, will have a major role on the ever-narrowing but still cloudy presidential field. Hamodia reached out to representatives and members of the Jewish communities in Ohio, Florida, and Illinois, three of the five states voting, to gauge the state of affairs there.

“I’m in my 12th year here and I don’t recall a primary that was so charged as this one,” said Rabbi Yaakov Fisch of Jacksonville’s Congregation Eitz Chaim. He added that, due to Florida’s “swing” status, candidates have focused tremendous attention on the state, saying that people have been continually called by campaigners and that rallies seem a constant.

“There is no monolith voice, most people are split between Rubio and Cruz, and are very weary of the front-runner,” he said.

Bringing the election fever even closer to home, Sen. Cruz’s Jacksonville headquarters is set up directly across from Rabbi Fisch’s shul, in the same location that the Romney campaign used in 2012.

Rabbi Shaya Hauptman, head of the Torah Academy of Jacksonville, said that elections had taken center stage in the community, in step with the rest of the country. He added that while the largely Republican-leaning populace had no consensus candidate, Trump supporters were the “loudest,” although not necessarily the most numerous.

In general, Rabbi Hauptman said that the Jewish community largely reflects the conservative nature of Jacksonville, whose culture mirrors the Deep South more than cities such as Miami and Orlando. He said that the strong desire to reduce the role of the federal government ranks high among the issues considered by voters, especially as it manifests itself in Obamacare and taxation.

Alan Sakowitz of North Miami Beach said that being resigned to a victory by Trump, who holds a commanding place in Florida polls, could lower voter turnout.

“At this point, it looks like a forgone conclusion that Trump will take it, which everybody thinks is a disaster,” a reference to the feelings of the local Jewish community, adding that general displeasure over the tenor of the elections has also frustrated many. “The debates were entertaining, but not very professional.”

In Florida, Sakowitz said that, for many in the community, the local issue of the possibility of private school vouchers has taken priority over the national race. As such, despite Republican leanings, he felt many would vote in Democratic primaries in order to hold more sway over the voucher issue.

In Ohio, interview subjects said that Governor John Kasich’s successful record and popularity in the state has made him particularly well-liked, despite a sluggish performance in the national race.

“He created more jobs, got us out of the deficit from the recession years, encouraged smart spending, and stood up to the Democrats and his own party for things he felt were right, so we have a positive record to look at,” said Rabbi Yitz Frank, Director of Agudath Israel of Ohio. “It’s not a monolith. Rubio and Cruz have their supporters, but there are a lot of concerns about Trump.”

Avrohom Adler, also of Cleveland, said that the race has been a far more frequent topic of conversation than in past elections, but characterized the heightened excitement and interest as driven by “trepidation.”

“Definitely people are ’cerned about Trump and feel that he is very risky and dangerous, nobody knows what he will do next,” he said. “They are not so enamored of any of the candidates, but at least with John Kasich, we know he is someone who we can rely on and who has proven that he can get things done. Also, he stayed above the fray in all of the mudslinging that’s gone on.”

Mr. Adler said that the community is staunchly conservative and was holding out hope that a Kasich victory could at least pave to way to a contested Republican convention, seen by many as the only realistic way of blocking Trump from the nomination.

A Cincinnati resident who asked not to be named said that most in his community see Kasich as the “logical candidate,” based on his successful record in the state.

He added that the state’s school voucher program is a point that has made the governor particularly popular in the Orthodox community. Other state issues such as gun rights and national security were also high priorities, while issues such as immigration take less of a role. The Cincinnatian thought, given the contentious nature of the race, that turnout would be higher than usual, and that many individuals who had supported Cruz or Rubio would vote for the state’s governor in an effort to “make their vote count,” as both candidates are lagging far behind in polls.

In Illinois, Rabbi Dovid Schnell, president of the state’s chapter of Agudath Israel, said a standoff within the state government that has frozen spending in many areas and deprived non-public school students of busing has taken center stage over the national race.

“Local issues are the focal point, if the frum community could have their wish at this point, it would be peace on the state level,” he said.

He said that as in other communities, the national discussion mostly boiled down to “the Trumpies versus the stop-Trump people.” Rabbi Schnell said that, while Trump did have his share of supporters in the community, those opposing him were mostly concerned with finding the best strategic candidate to do so.

Moshe Davis of Chicago said that many in the community had come to view the race “more as entertainment than a matter of actual interest,” also noting that while all candidates had visited in the last week, they had spent far less time there than in other states.

“No matter what, the most important thing is to go out and vote,” he said. “Especially for our community it is almost more important how many people go to the polls than who they vote for.”