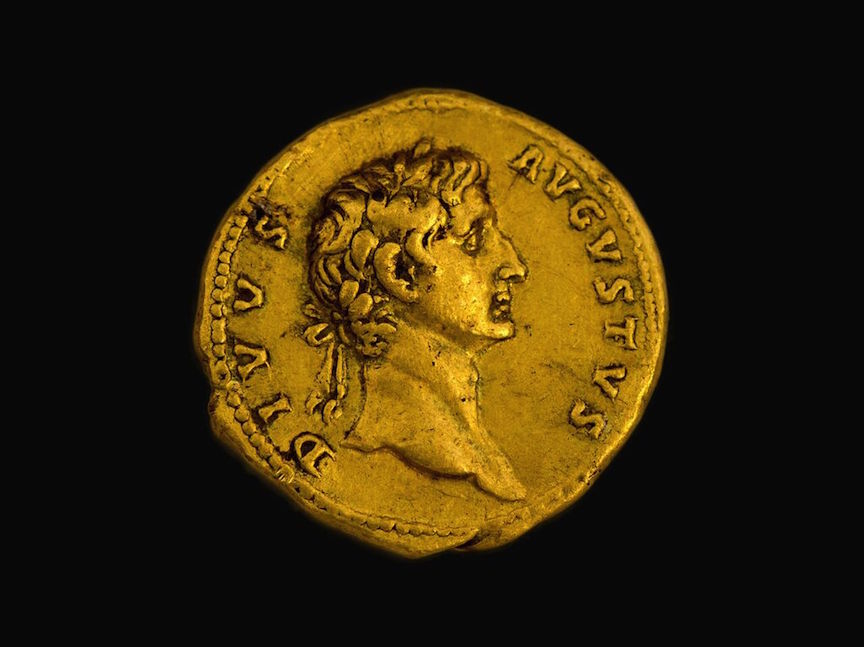 An Israeli hiker discovered a rare coin on a walk in northern Israel – so rare that only one other is known to exist in the world. The coin bears the image of Roman Emperor Augustus, and was minted of solid gold in 107 C.E by Emperor Trajan. Until now, the only existing edition of the coin known to exist was in the British Museum – but thanks to Kibbutz Kfar Blum member Laurie Rimon, Israel now has one as well.

During a recent trip to the eastern Galilee a group of veteran hikers, including Laurie, arrived at an archaeological site, Israel Radio reported. She discerned a shiny object in the grass, and picked it up, then realizing it was an ancient gold coin. The group’s guide, Irit Zuk-Kovacsi contacted the Israel Antiquities Authority with the help of archaeologist and veteran tour guide Dr. Motti Aviam, and within two hours an IAA representative joined the group of hikers in the field. Laurie turned the rare find over to him admitting that “it was not easy parting with the coin. After all, it is not every day one discovers such an amazing object, but I hope I will see it displayed in a museum in the near future.”

According to Dr. Donald T. Ariel, head curator of the coin department at the Israel Antiquities Authority, “The coin may reflect the presence of the Roman army in the region some 2,000 years ago – possibly in the context of activity against Bar Kochba supporters in the Galilee – but it is very difficult to determine that on the basis of a single coin. Historical sources describing the period note that some Roman soldiers were paid a high salary of three gold coins, the equivalent of 75 silver coins, each payday. Because of their high monetary value soldiers were unable to purchase goods in the market with gold coins as the merchants could not provide change for them.”

Nir Distelfeld, an inspector with the IAA Unit for the Prevention of Antiquities Robbery, praised Laurie for her “exemplary civic behavior by handing this important coin over to the Antiquities Authority. This is an extraordinarily remarkable and surprising discovery. I believe that soon, thanks to Laurie, the public will be able to enjoy this rare find.