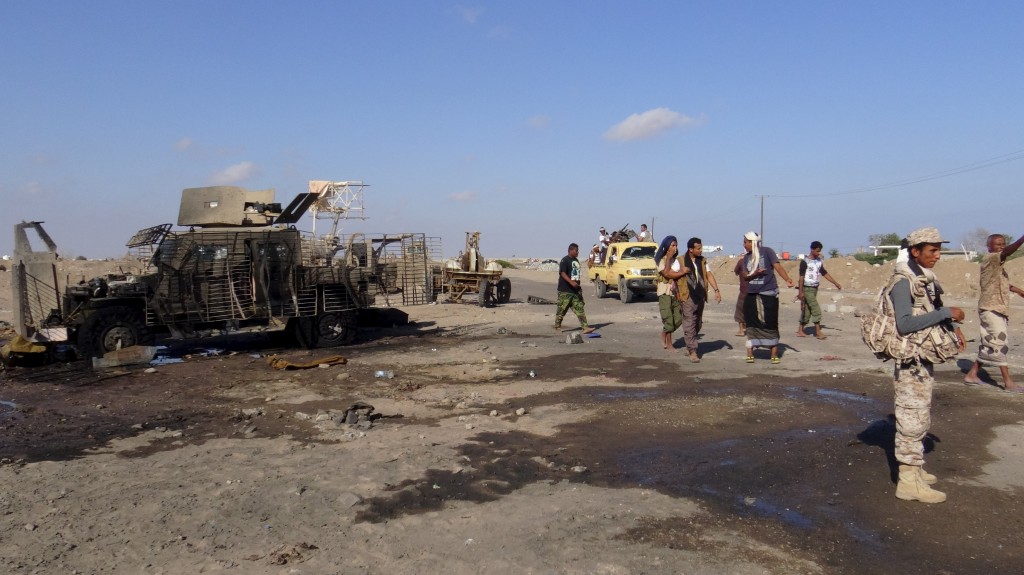 The air strikes hit al-Mansoura district, a stronghold for terrorists and an area which has witnessed several attacks against local security officials since the Saudi-led coalition retook Aden last July from the Iran-allied Houthi militia.

The sources said at least 20 civilians and terrorists were wounded as well as three members of the security forces. The strikes targeted the terrorists who were sitting atop vehicles and one of the strikes hit a local government building. Intermittent clashes were still going on, they said.

There was tenuous calm in the district later on Sunday, with streets leading out of the area closed off. A Reuters reporter saw the rubble of a butcher’s shop and the wreckages of destroyed cars. Electricity was cut across the district and food shops remained closed.

A security official said the strikes, thought to have been carried out by the Saudi-led coalition, were the “second stage” of retaking al-Mansoura from terrorists.

There was no immediate comment from the Saudi-led coalition on the strikes.

The strikes took place a day after forces loyal to Yemen’s president broke a siege by the Houthis around Taiz, Yemen’s third biggest city, about 124 miles northwest of Aden.

Yemen’s embattled government has been forced out of the capital Sana’a by the Houthi rebels and is now based in Aden, but struggles to impose its authority even there.

The southern city has gone from being one of the world’s busiest ports as a former hub of the British empire to a backwater, and then in recent months, a conflict zone.

The coalition began a military campaign a year ago to prevent the Houthis from taking complete control of Yemen.