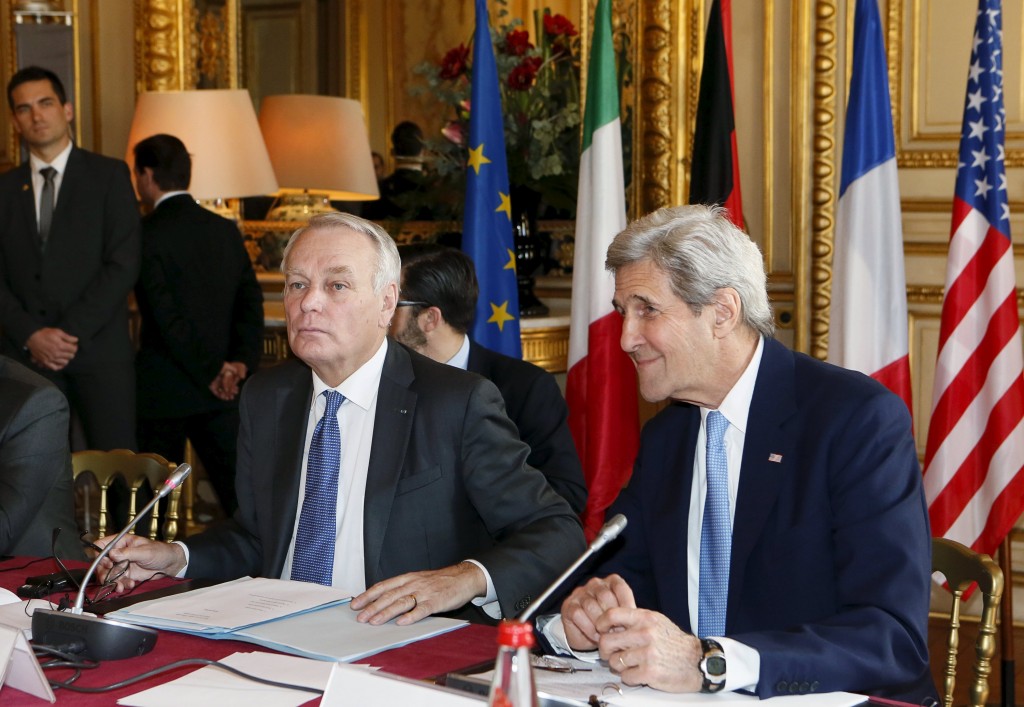 The British, German and Italian foreign ministers and the EU foreign policy chief were also joining the meeting Sunday in Paris.

The meeting comes ahead of U.N.-sponsored indirect peace talks on Syria, which are scheduled to start Monday in Geneva amid a two-week partial cease-fire that has mostly held.

Diplomats were to also discuss a possible initiative to restart the Palestinian-Israeli peace process, as France hopes to hosts an international conference on the issue in the coming months.

The chaotic situation in Libya, Yemen’s civil war and the Ukraine peace process are also on the agenda in Paris.

On Saturday, Kerry raised the possibility of working out a cease-fire in Yemen similar to the arrangement that has been implemented in Syria, the State Department said.

Speaking in Hafr al-Batin in Saudi Arabia, at a meeting with Saudi Foreign Minister Adel al-Jubeir whose country leads an Arab coalition trying to dislodge Iran-allied Houthis from areas in Yemen captured last year, Kerry said that both sides have agreed to work together in the coming days “to explore the possibilities of a political solution.”

“We both agree that it would be desirable to see if we can find a similar approach, as we did in Syria, to try to get a cease-fire,” Kerry said, referring to the truce that has largely been holding for nearly two weeks in Syria.

Jubeir said Saudi Arabia believed a political settlement that would ensure the Houthis abided by common understandings reached before the Houthi capture of Sana’a would pave the way to a solution.

“We reiterated to the secretary of state our commitment as expressed by the GCC (Gulf Cooperation Council) heads of state to embark on a long-term reconstruction and development plan for Yemen once the hostilities have ended,” Jubeir said. “We are determined to protect legitimacy in Yemen, and we’re also committed to a political process in Yemen.”