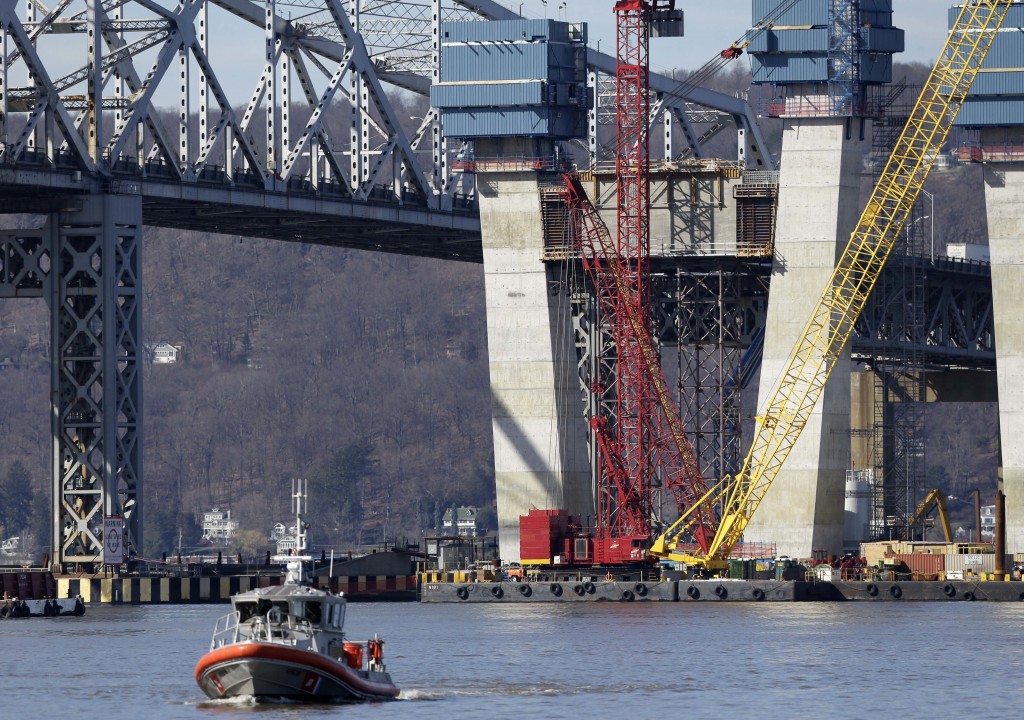 A tugboat crashed into a barge on the Hudson River north of New York City early Saturday, killing one crew member and leaving two missing.

The 90-foot tugboat named Specialist hit a barge around 5:20 a.m. near where the new Tappan Zee Bridge, which connects two counties north of New York City, is being built, police said. The tugboat sank, spilling about 5,000 gallons of fuel into the water, authorities said.

New York State Police, the U.S. Coast Guard and fire and police agencies from Westchester and Rockland counties are searching for the missing crew members. The name of the victim who was recovered was not immediately released.

“There are some dive teams here but the conditions of the river make it difficult and unsafe to enter the water,” said Westchester County Police spokesman Kieran O’Leary.

Westchester County Executive Robert Astorino said three tugboats were pushing a barge from Albany to Jersey City, New Jersey, when one of the three — situated on the right side as it headed south — hit a stationary barge that was part of the Tappan Zee Bridge construction project.

A tugboat on the left side of the barge that was being pushed, as well as one that was pushing the barge from the rear, were not involved in the accident, Astorino said.

Workers were on the bridge construction barge that was hit, but no one was injured.

Astorino said the accident occurred near the center of the existing Tappan Zee Bridge, and that the Specialist sank in about 40 feet of water within minutes.

A team from the state Department of Environmental Conservation will assess damage and cleanup of the fuel spill, he said.

James Mercante, an attorney for the owner of Specialist, said the crew was licensed, competent and experienced personnel.

“It’s a shocking, horrific marine tragedy,” Mercante said. “Right now the company is more concerned with the families of the crew and mourning.”

The crash occurred near the scene of a 2013 boat crash that killed two people.

That incident also involved a Tappan Zee Bridge construction barge. Victims’ families have filed lawsuits against several construction companies in that crash. The Coast Guard and the state Thruway Authority, which is building the bridge, said the barge was properly lighted, although additional lighting was installed after the crash.

The new bridge is to replace an adjacent aging span that now connects Westchester and Rockland counties. Construction on the $3.9 billion project began in October 2013 and is expected to be completed by 2018.