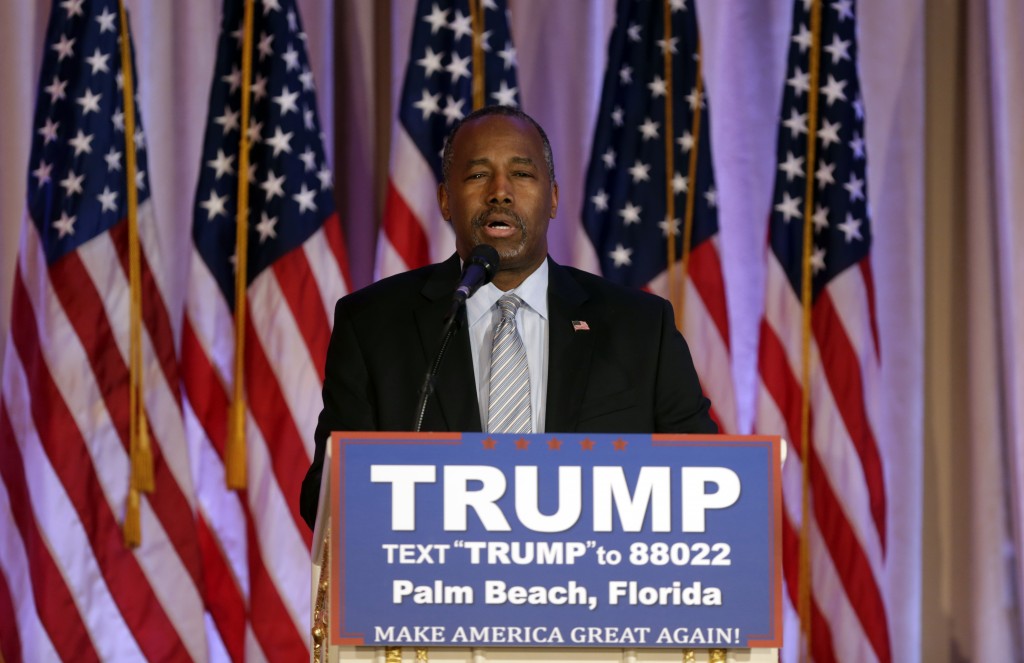 “We buried the hatchet. That was political stuff,” Carson said during a joint appearance with the billionaire businessman at a news conference at Trump’s Mar-a-Lago Club resort in Palm Beach, Florida.

“I have found in talking with him, that there’s a lot more alignment, philosophically and spiritually, than I ever thought that there was,” added Carson, warmly praising his former rival and seeking to present him as more thoughtful than his public image often suggests.

The latest endorsement for Trump followed a CNN-hosted Republican debate in Miami on Thursday night at which Trump and the remaining three candidates in the Republican race struck a markedly more civil tone. Carson’s backing also gives the New York real-estate magnate a boost just days before crucial nominating contests in the battle to be the party’s presidential candidate for the Nov. 8 election.

Republican primaries in five states – including Florida and Ohio – on March 15 will be critical for Trump to cement his lead, and to determine whether U.S. Senator Marco Rubio of Florida and Ohio Governor John Kasich will be able to continue with their increasingly long-shot candidacies. Trump’s nearest rival in the race is U.S. Senator Ted Cruz of Texas.

During Friday’s news conference, both Trump and Carson talked of “two” Donald Trumps – the public and the personal – apparently seeking to highlight a more measured side in contrast to his combative and sometimes crude tone on the campaign trail.

“There are two different Donald Trumps: there’s the one you see on the stage and there’s the one who’s very cerebral, sits there and considers things very carefully. You can have a very good conversation with him. And that’s the Donald Trump that you’re going to start seeing more and more of right now,” Carson said.

Trump said Carson had not asked for any formal role, but praised his former rival’s ideas on education. “Ben’s going to have a big, big part,” he said.

Carson, who gathered some support last year in opinion polls but whose campaign failed to garner backing in the early nominating contests, dropped out of the race last week.

Trump began his presidential run as a long shot but has won a string of early primary contests to become clear front-runner.

In the process, he has alarmed many in the Republican establishment with his brash style and statements about immigrants, Muslims and free trade. That has prompted some party leaders to push for anyone but Trump.

When asked why he did not back Cruz, Carson said that he could not support political operatives who want to stop Trump and that blocking him would fracture the Republican Party and hand Democrats a victory in November.