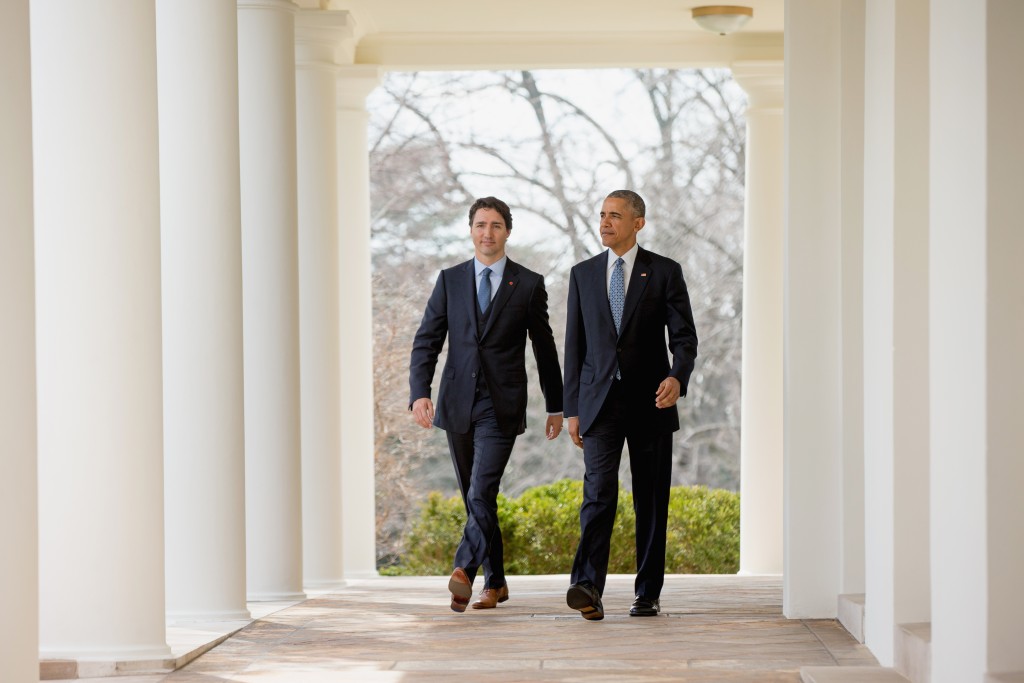 One is leaving office soon, the other just starting, but President Barack Obama and Canadian Prime Minister Justin Trudeau basked in mutual affection Thursday over all the things they share, emphasizing common ground on trade and combating climate change.

Trudeau’s official visit to the United States was the first by a Canadian leader in nearly two decades. He and Obama announced new efforts to curb global warming and to make it easier for the two countries to trade with one another. They also appeared to enjoy each other’s company, with Obama playing the role of elder statesman and Trudeau sounding a youthful “hope and change” theme like the one Obama campaigned on seven years ago.

“From my perspective, what’s not to like?” Obama said.

“He’s somebody with a big heart, but also a big brain,” Trudeau said. “And for me to be able to count on a friend who has lived through many of the things that I’m about to encounter on the political stage, on the international stage, it’s a great comfort to me.”

Beginning with an ornate arrival ceremony on the South Lawn, Obama and his wife, Michelle, welcomed Trudeau, his wife, Sophie Gregoire and their three children.

The leaders found time for some levity before heading into an Oval Office meeting, with a state dinner to come in the evening.

Despite that close geographical and political alliance, no Canadian prime minister had made an official visit since 1997, a fact that Obama noted.

The leaders also sought to show progress on common areas of concern. Obama said they had instructed aides to work on efforts that would make it easier for goods and people to move back and forth between the two nation’s borders. Canada is the United States’ largest trading partner, with more than $2 billion worth of goods and services crossing the border every day. About 75 percent of Canada’s exports go to the U.S.

And to start the day off, they announced efforts to reduce methane emissions from gas and oil production. They committed to reducing methane emissions by 40 percent to 45 percent from 2012 levels over the coming decade.

“I’m confident that by working together, we’ll get there sooner than we think,” Trudeau said.

Methane is the second most prevalent greenhouse gas emitted in the U.S. from human activities and is much more efficient at trapping radiation than carbon dioxide.

They also announced Obama will address Canada’s Parliament in June.

Trudeau’s father swept into power in 1968 and, with a short interruption, served until 1984. He was often compared to President John F. Kennedy and remains one of the few Canadian politicians known in America.