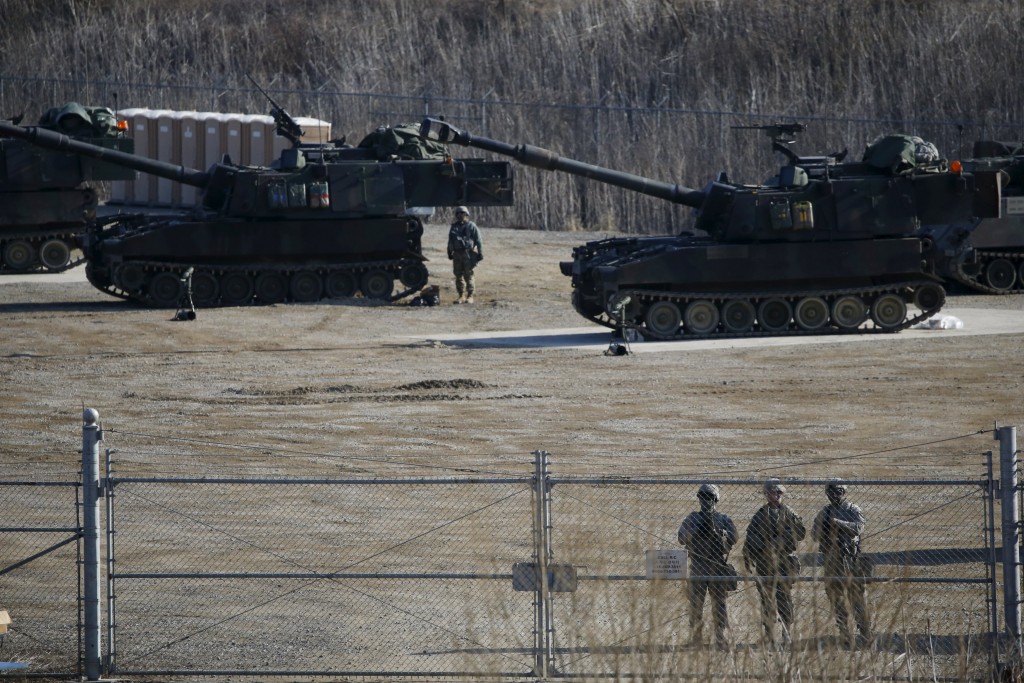 The North also announced on Thursday it has scrapped all agreements with the South on commercial exchange projects and would “liquidate” South Korean assets left behind in its territory.

North Korea has a large stockpile of short-range missiles and is developing long-range and intercontinental missiles as well. The missiles fired on Thursday flew about 300 miles off its east coast city of Wonsan and were likely from the Soviet-developed Scud series, South Korea’s Defense Ministry said.

Japan, which is within range of the longer-range variant of Scud missiles or the upgraded Rodong missiles, lodged a protest through the North Korean embassy in Beijing, Japan’s Kyodo news agency reported.

North Korea often fires short-range missiles when tensions rise on the Korean peninsula. Pyongyang gets particularly upset about the annual U.S.-South Korea drills, which it says are preparations for an invasion.

The U.S. and South Korea remain technically at war with the North because the 1950-53 Korean War ended in an armed truce instead of a peace agreement.

Around 17,000 U.S. military personnel are participating alongside some 300,000 South Korean troops in what South Korea’s Defense Ministry has called the “largest-ever” joint military exercises.

North Korea on Sunday warned it would make a “preemptive and offensive nuclear strike” in response to the exercises.

After Thursday’s missile launches, North Korea announced it would “liquidate” South Korean assets left behind in the Kaesong industrial zone and in the Mount Kumgang tourist zone.

Seoul suspended operations in the jointly-run zone last month as punishment for the North’s rocket launch and nuclear test.

Mount Kumgang was the first major inter-Korean cooperation project. Thousands of South Koreans visited the resort between 1998 and 2008. Seoul ended the tours in 2008 after a North Korean soldier shot dead a South Korean tourist who wandered into a restricted zone.

South Korea’s Foreign Ministry said Thursday’s missile launches again violated a series of U.N. Security Council resolutions and it would refer the matter to the Council sanctions committee mandated to enforce the resolutions.

Chinese Ministry of Foreign Affairs spokesman Hong Lei described the situation on the Korean Peninsula as “complex and sensitive.”

“All sides should stop their provocative words and deeds to avoid a further rise in tensions,” he said.

North Korean leader Kim Jong Un said his country has miniaturized nuclear warheads to mount on ballistic missiles, state media reported on Wednesday, and called on his military to be prepared to mount preemptive attacks against the United States and South Korea.

It was his first direct comment on the technology needed to deploy nuclear missiles. North Korean state media released photographs it said showed Kim Jong Un inspecting a spherical miniaturized warhead. State media has previously made that claim, which has been widely questioned and never independently verified.

South Korea’s Defense Ministry said it did not believe the North has successfully miniaturized a nuclear warhead or deployed a functioning intercontinental ballistic missile.

State Department spokesman John Kirby declined to comment on Kim’s claim to have miniaturized nuclear warheads and accused him of “provocative rhetoric.”

“I’d say the young man needs to pay more attention to the North Korean people and taking care of them than in pursuing these sorts of reckless capabilities,” Kirby said.

The Pentagon said this week it had not seen North Korea demonstrate a capability to miniaturize a nuclear warhead. But Captain Jeff Davis, a Pentagon spokesman, said the department was working on U.S. ballistic missile defenses to be prepared.

North Korea conducted its fourth nuclear test on Jan. 6, but its claim to have set off a miniaturized hydrogen bomb last month has been disputed by the U.S. and South Korean governments and many experts, who said the blast was too small to back it up.