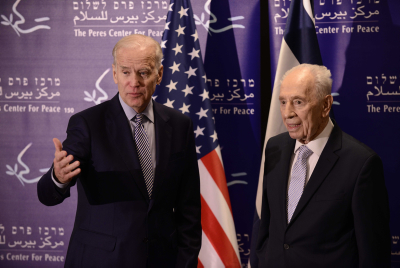 Agriculture Minister Uri Ariel urged U.S. Vice President Joe Biden to visit Israelis who were injured in a wave of terror Tueday. “The Vice President has a first-hand opportunity to see the reality that Israel faces, which is different than what is reported in the newspapers. I call on the Vice President to visit the wounded while he is in Israel, and to see Palestinian murder up close,” said Ariel.

Biden was actually in Jaffa when an Arab terrorist went on a stabbing rampage, killing one person and injuring ten. The victim was identified as Taylor Force, a U.S. citizen, who was a student at the Owen Graduate School of Management at Vanderbilt University in Tennessee. He was on an Owen school trip to Tel Aviv.

When the attacks took place, Biden was at the Peres Center for Peace, about a mile south of the Jaffa Port, where the terrorist stabber was finally subdued. Ariel said that it would do Biden good to “come face to face with the results of Palestinian incitement.”

In a statement, the White House said that Biden “condemned in the strongest possible terms, the brutal attack which occurred in Jaffa during his meeting with President Peres, and commented that there is no justification for such acts of terror. He expressed his sorrow at the tragic loss of American life and offered his condolences to the family of the American citizen murdered in the attack, as well as his wishes for a full and quick recovery for the wounded.‎”