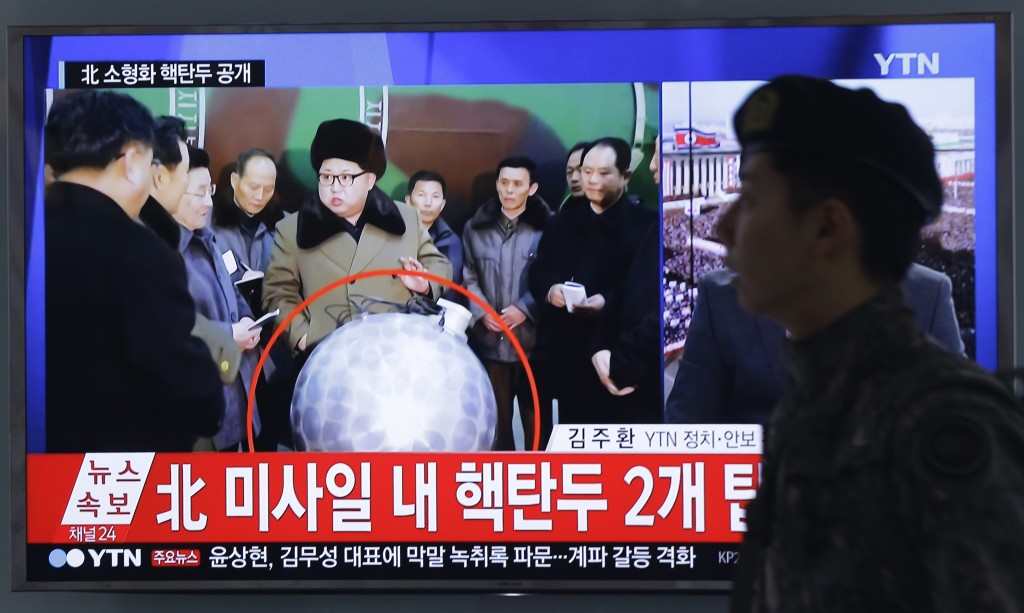 North Korea caused a new stir on Wednesday by publicizing a purported mock-up of a nuclear warhead for the first time, with leader Kim Jong Un saying his country has developed miniaturized atomic bombs that can be placed on missiles.

The North’s Rodong Sinmun newspaper carried photos on its front page that showed Kim and nuclear scientists standing beside what outside analysts say appears to be the model warhead — a small, silverish globe presented on a low table in a hangar with a ballistic missile or a model ballistic missile in the background.

The newspaper said Kim met his nuclear scientists for a briefing on the status of their work and declared he was greatly pleased that the warheads had been standardized and miniaturized for use on ballistic missiles.

South Korea’s Defense Ministry said Wednesday it was analyzing the objects shown in the photos.

This is the first time the North has publicly portrayed what its designs look like, though it remains unclear whether the North actually has a functioning warhead of that size or if it is simply trying to develop one. Either way, this “disclosure” comes amid heightened tensions in the wake of harsh U.N. sanctions on North Korea for its nuclear test and long-range rocket launch earlier this year. On Monday North Korea warned of pre-emptive nuclear strikes after the United States and South Korea began holding their biggest-ever war games, which will run through the end of April.

Previously Pyongyang said it has nuclear warheads small enough to put on long-range missiles capable of striking the U.S. mainland, but experts have questioned such claims.

The round object shown in the photos appears to be a model of a trigger device for a warhead which would contain uranium or plutonium, according to nuclear expert Whang Joo-ho of Kyung Hee University in South Korea. He said it was obviously a model because if it was a real warhead, Kim and the others in the photos would not have stood near it, due to concerns of radioactive leaks. In the photos, no one was seen wearing radiation suits or protection.

Whang said it was impossible to judge from the photos if North Korea has mastered the necessary miniaturization technology because it was not known if the object was real or not. But he said its shape looks similar to ones used in existing nuclear warheads developed by other countries.

The North says it tested its first H-bomb on Jan. 6, followed last month by the launch of a rocket that put a satellite into orbit but which violated U.N. resolutions because it contains dual-use technology that could also be applied to long-range ballistic missiles.

North Korea’s possible development of small nuclear weapons and the long-range missiles which could carry them to overseas targets, has long been a matter of concern and could potentially shake up the security balance in Asia.