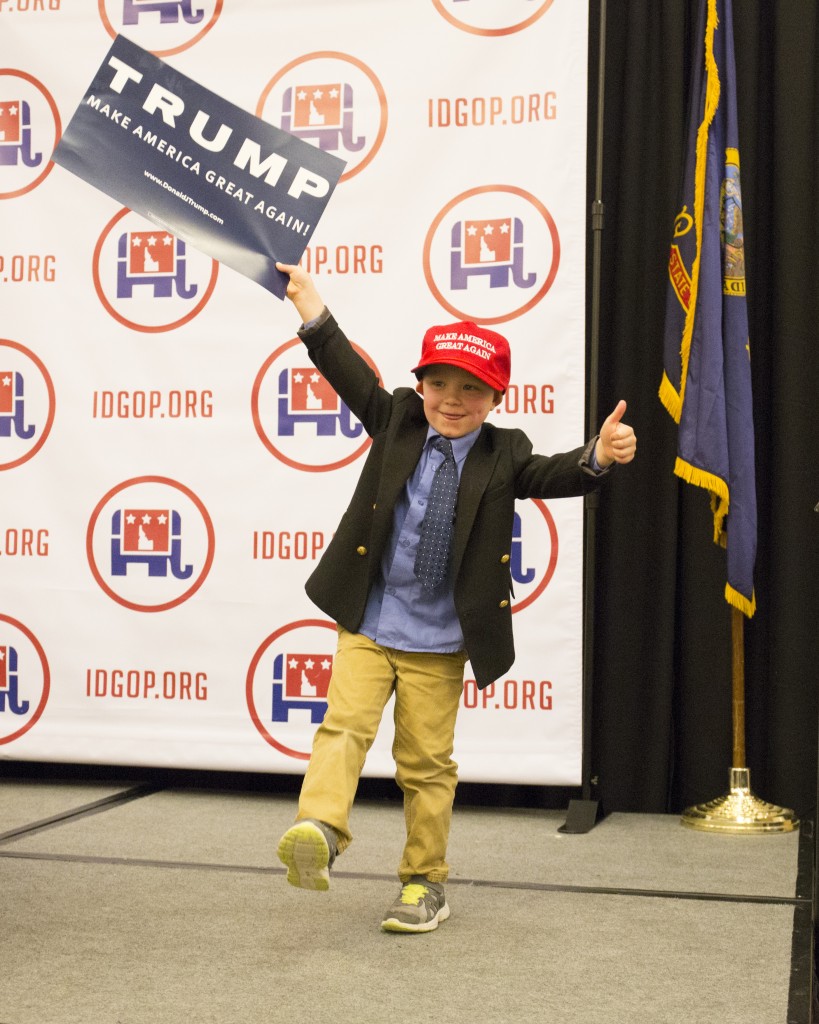 His party in chaos, a conciliatory Donald Trump pleaded with mainstream Republicans to unify behind his candidacy on Wednesday as his White House rivals seized on their last best opportunity to block the billionaire businessman from building an insurmountable delegate lead in two key states.

The often-brash Trump softened his tone hours after securing another three primary victories, praising House Speaker Paul Ryan as a man he respects and encouraging Mitt Romney to promote party unity. The comments marked a sharp reversal in tone, if not substance, from a week earlier when Trump hurled insults at his party’s 2012 presidential ticket.

“Instead of fighting it, they should embrace it,” Trump said of his candidacy in a Wednesday interview with Fox News Channel. “If we embrace what’s happening and if everybody came together … nobody could beat the Republican Party.”

Acknowledging many mainstream Republicans fear Cruz is too conservative, Fiorina told a Miami crowd that she’s “horrified” by Trump.

As the competing calls for unity suggest, the Republican Party’s 2016 contest is far from settled a week before high-stakes contests in Florida and Ohio that could finish off home-state candidates Marco Rubio and John Kasich or resurrect their anemic candidacies.

On the Democratic side, Bernie Sanders surprised front-runner Hillary Clinton with a win Tuesday night in Michigan, a victory that breathed new life into his White House bid and forecast a longer Democratic contest. But Clinton, who won Mississippi, padded her delegate lead and is now halfway to the number needed to clinch the nomination.

Indeed, Tuesday’s contests in Michigan, Mississippi, Idaho and Hawaii signaled bad news for Republican officials across the country who fear that both Trump and Cruz – the day’s only GOP winners – are wholly unelectable in a general election. While Fiorina’s endorsement was noteworthy, many Republican leaders hoped Rubio would emerge as the face of the party given his ability to expand the GOP’s appeal beyond its traditional base of older, white men.

Yet Rubio suffered another brutal drubbing Tuesday, failing to finish better than a distant third in any of the four elections.

“The Republican establishment is in its death throes,” said longtime tea party leader Mark Meckler. “The only remaining candidates are 100 percent anti-establishment.”

Desperately trying to put the focus back on Clinton, the Republican National Committee on Wednesday filed a federal lawsuit against the Obama administration to force the release of additional communication between Clinton’s State Department, her campaign and senior aides.

Yet the 2016 conversation focused largely on Republican infighting on Wednesday as the fight to stop Trump shifted to five states that will vote next Tuesday – none bigger than Florida and Ohio.

Trump has won 15 of 24 Republican nominating contests so far but he still must do better to win the nomination before the GOP’s national convention this summer.

His lead over Cruz grew by only 15 delegates Tuesday. That’s because all four states awarded delegates proportionally, so even the second-place finisher got some. In the overall race for delegates, Trump has 458 and Cruz has 359. Rubio has 151 delegates and Kasich has 54.

It takes 1,237 delegates to win the Republican nomination for president.

For Democrats, Clinton has accumulated 1,221 delegates and Sanders 571, including superdelegates. Democrats need 2,383 delegates to win the nomination.

The delegate math highlights the importance of primaries in states like Ohio and Florida, which allocate all of their delegates to the winner.

While Trump and Cruz are calling for party unity on the campaign trail, there was little evidence either had reached out to Republican leaders on Capitol Hill they’d have to work with as president.

“I’ve had my phone on, but nobody’s called,” said Sen. Steve Daines, R-Mont., when asked if Trump or Cruz had contacted him.

“I talked to him once, a couple years ago,” Utah Sen. Orrin Hatch said of Trump.

And South Carolina Sen. Lindsey Graham on Wednesday called Cruz “the most viable alternative to Trump,” noting that he’d prefer Rubio or Kasich, but “we are where we are.” Graham last month likened the choice between Trump and Cruz to “being shot or poisoned.”

Donna Cassata, Alan Fram and Andrew Taylor in Washington contributed to this report.