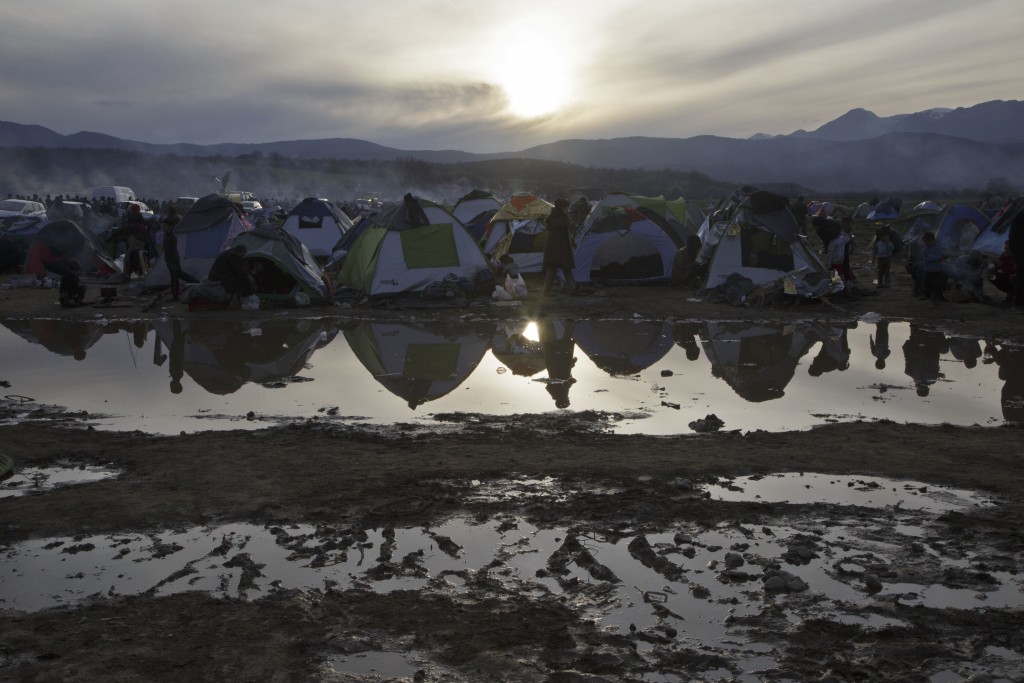 Turkey’s coastguard intercepted dozens of mostly Syrian migrants in coves along the Aegean coast on Wednesday as they continued to attempt perilous sea crossings to Greece despite Ankara’s efforts to stem the flow under a deal with the European Union.

A group of 42 people, more than a dozen of them children, sat inside a coastguard compound, some lying under blankets, in the seaside resort of Didim after being detained. Scores more waited among boulders by the beach, watched by armed police, as a bus came to take them away.

Just offshore, a coastguard boat approached what appeared to be a small vessel carrying more migrants. Some officials fear a scramble to cross to the nearby Greek islands, despite increased NATO-backed sea patrols in the Aegean, before the tentative agreement with the EU comes into full force.

Under the draft deal struck on Monday, Turkey agreed to take back all irregular migrants in exchange for more funding, an earlier introduction of visa-free travel to Europe for Turks, and a speeding up of Ankara’s long-stalled EU membership talks.

The aim, Prime Minister Ahmet Davutoglu and EU leaders have said, is to discourage illegal migrants and break the business model of human smugglers who have fueled Europe’s largest migration crisis since World War II. The message, they say, is simple: try to cross illegally and get sent straight back.

But the United Nations and human rights groups have warned that blanket returns without considering individual asylum cases could be illegal. And it remains far from clear that the message will get through to desperate families who see smuggling as their surest route into Europe as its borders close.

Even as groups of migrants were detained on the beaches, more arrived by taxi in Didim, a popular holiday resort with yachts bobbing in its marina. Some carried bags, children in tow, and headed for the town’s small hotels, which like in other parts of the Aegean coast, have been profiting from migrant business in the tourism low season.

“The markets, the hotels, the restaurants – everyone was smiling. Because of the refugees we eat bread,” said the manager of one hostel. The hostel is in Basmane, a run-down neighborhood of Izmir, the main city on the Turkish Aegean coast and long a stopover for migrants trying to reach Europe during the Iraq wars and Arab Spring uprisings.

More than a million people fleeing war and poverty in the Middle East and beyond have flooded into the EU since early 2015, most crossing the Aegean from Turkey to Greece in small boats, then heading north through the Balkans to Germany.

Rights group Amnesty International called the proposed mass return of migrants under the EU deal with Turkey a “death blow to the right to seek asylum”. Relief charity Doctors without Borders said it was cynical and inhumane.

“The aim here is to discourage irregular migration and … to recognize those Syrians in our camps who the EU will accept – though we will not force anyone to go against their will – on legal routes,” he said after a meeting with Tsipras in Izmir.

Under the tentative deal with Ankara, the EU would admit one refugee directly from Turkey for each Syrian it took back from the Greek Aegean islands. Those who attempted the sea route illegally would be returned and go to the back of the queue.

With new groups of migrants from Syria, Iraq, Afghanistan and elsewhere continuing to arrive along Turkey’s coast in the hope of crossing to Greece, that message appears for now not to be getting through, to the frustration of some local residents.

“Whatever’s necessary should be done. The refugees should be gathered in one spot in my opinion. Everything should be done to ensure everyone’s comfort, peace and welfare,” said Armagan Gulcicek, an Izmir resident.

“Let’s put an end to this nonsense.”