Italian Sefer Torah Believed to Be Oldest in Use 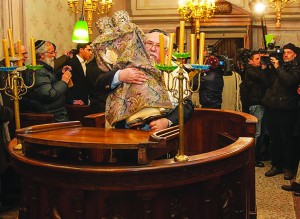 A sefer Torah from medieval Italy has been identified as what is believed to be the oldest one still halachically acceptable for use. Following the conclusion of testing and restoration, the Torah scroll was returned to the historic Biella Synagogue, in which it had been kept for centuries, under the auspices of the Jewish community of Vercelli.

Rabbi Amedeo Spagnoletto, a Rome-based sofer who is an expert in restoring antique sifrei Torah, particularly of Italian origin, was called to examine the Torah scrolls belonging to the community of Vercelli a few years ago, when he first came upon this unique find.

“It’s very original. I myself prepared a kosher ink and I tanned klaf especially for this scroll to guarantee a total adherence with the original,” he told Hamodia. “I filled the few erased and broken letters, sewed up tears on the flaps, and spread out the folded parchments where the script was quite unreadable.”

Upon seeing that the sefer Torah was not only centuries old but was a good candidate to be restored to a kosher state, Rabbi Spagnoletto and leaders of the local Jewish community decided to send samples of the parchment for testing at the University of Illinois, which has worked extensively with Judaica in the past. The small pieces were removed in a way so as not to damage the body of the Torah scroll itself. After investigation, researchers at the university estimate that it dates back to the year 1250 C.E.

The origin of the Biella scroll remains a mystery. Rabbi Spagnoletto said that given the mercantile and transient nature of life in medieval Italy, in which Jews played an integral role, sifrei Torah were brought to the country from central Europe, North Africa and Turkey. However, he said that the uniquely Italian style of corrective work of sofrim found throughout the writing betrays the fact that the Torah scroll found its way to the country at some point in the 16th or 17th century.

One particularly interesting feature, not uncommon to medieval sifrei Torah, is that several sections that were originally written according to local custom were erased by later generations of sofrim and re-written to conform to the opinion decided upon by the Shulchan Aruch.

Rabbi Spagnoletto said that despite the corrective work, “you can always find the original writing and imagine what it would have looked like.” 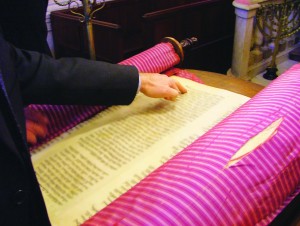 After years of restoration, the Biella scroll was returned to the Vercelli community last week, and this past Shabbos it was read from. Although the community has dwindled over the years, a minyan was gathered to celebrate the momentous occasion.

The sefer Torah is not the oldest on record in Italy. In 2013, a Torah scroll belonging to the University of Bologna was dated as having been written nearly a century earlier and is believed to be the oldest complete sefer Torah in existence. However, the Biella scroll is thought to be the oldest that is still kosher and being actively used.

Despite his experience with such work, Rabbi Spagnoletto said that the condition of the Torah scroll presented a unique challenge.

“What was difficult was to think hard as to where to work on restoration and where to leave the scroll as is,” he said. “Wherever I could keep the sefer Torah halachically acceptable without doing anything, I left it alone to preserve its medieval features.”

Jewish communities first began to form in the region of northern Italy known as the Piedmont in the 1400s. Despite ghettoization and persecution, many Jews rose to great prominence, mostly as financiers. The shul in Biella, a town near the larger city of Vercelli, was constructed in the early 1600s and is noted for its baroque architecture.

In the meantime, the sefer Torah will remain in Biella to be reserved for use on special occasions, given its delicate state. A meeting of leading members of several Italian Jewish organizations is planned to determine whether it should be transferred to a more active community for permanent storage.

This article appeared in print on page 14 of the March 2nd, 2016 edition of Hamodia.