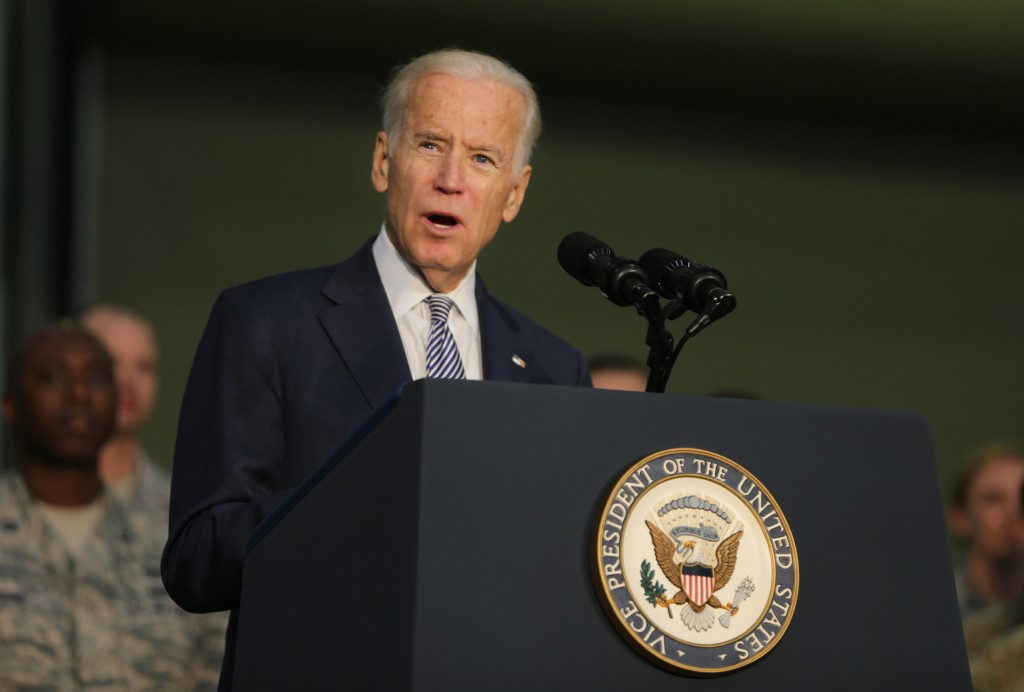 Vice President Joe Biden kicked off a Middle East tour Monday, vowing that the United States and its allies would “squeeze the heart” and destroy the Islamic State terror group.

Biden spoke before several hundred U.S. airmen as drones rolled down the runway at the Al-Dhafra Air Base, a major desert outpost near the United Arab Emirates capital, Abu Dhabi.

The Emirates is one of the most important U.S. military and political allies in the Persian Gulf. It is also a major commercial hub that includes the business-friendly port city of Dubai.

“We have to squeeze the heart of Daesh in Iraq and Syria so they can’t continue to pump their poison in the region and around the world,” Biden said, using an Arabic acronym for IS, a terror group he dismissed as “criminals and cowards.”

The base hosts American and other aircraft taking part in operations against the IS group in Iraq and Syria — a point Biden noted as he rallied the assembled troops.

The Emirates is the first stop on a regional tour that will also include Israel, the Palestinian Authority and Jordan.

The trip will include talks on U.S. economic and energy interests, as well as security concerns about Iran and Syria, the White House said.

He later looked at a model of a desalination plant, something crucial to the Emirates, which experts warn may run out of groundwater in the next 15 years. Emirati Minister of State Sultan al-Jaber handed him a bottle of water made at the plant. The vice president looked at it, then smiled.

“Now make sure I’m still standing,” he said. “Watch what happens when I take the first sip. I’m more energized.” Biden then paused for a moment and added, “Do you need a partner? I’m out of a job soon.”

The seven-state Emirates federation, which includes the Gulf commercial center of Dubai, is one of the largest oil producers in OPEC (Organization of the Petroleum Exporting Countries).

The Emirates is also a member of the U.S.-led coalition fighting the Islamic State terror group in Iraq and Syria.

In announcing Biden’s trip last week, the White House said the Emirates visit will highlight the strong relationship “with one of our closest regional allies covering the full range of political, economic and security ties.”

Biden’s visit to the country is expected to include talks with Sheikh Mohammed bin Zayed Al-Nahyan, the powerful crown prince of Abu Dhabi, and Dubai ruler Sheikh Mohammed bin Rashid Al-Maktoum, who is the federation’s vice president and prime minister.

Biden is not expected to offer any new initiative on the Israeli-Palestinian conflict when he travels to Israel and the Palestinian Authority. The White House has said it does not believe either side has the political will for reviving the peace process.