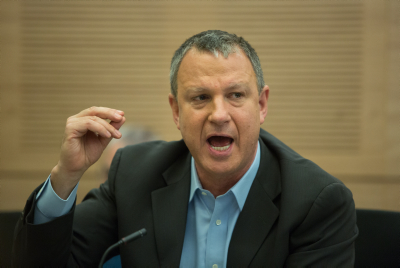 “There are two parties and two alternatives,” he said, referring to his own party and the Likud. With Zionist Camp performing poorly in polls, Margalit, a former venture capital investor who is popular in the party, said that he was considering running in the primaries for leadership of the party.

According to a new poll released over the weekend, Zionist Camp would fall from its current 24 to 18 seats. As a result, the Yitzchak Herzog-led party would become the third largest in the Knesset, with most of its seats going to Yair Lapid’s Yesh Atid, which would jump eight seats, from 11 to 19, to become the second largest party. In his comments, made before a Kfar Saba audience, Margalit appealed to voters to “come home, rejoin us in Labor and leave Yesh Atid.”

Speaking in Ramat Gan, Herzog said that Israelis had had enough of the far left, and that it had no place in Zionist Camp. “The public is sick of hearing the radical left blame Israel for the current situation without recommending solutions for security, and they are tired of the solutions of the far right, which would require us to annex lands and the large numbers of Palestinians that come with the land.”

Both sides, he said, “will lead us to ‘Israestine,’ a binational state between the Jordan and Mediterranean. We are the only ones that are recommending a plan that, if adopted, would tomorrow stem the terror wave and change the situation.”