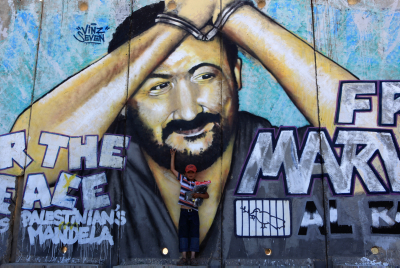 Arch-terrorist Marwan Barghouti, who is serving five life sentences for killing Israelis in numerous terror attacks, has been nominated for a Nobel Peace Prize by Adolfo Perez Esquivel, an Argentinian architect who won a Nobel Prize in 1980, Army Radio reported over the weekend. A spokesperson for the Fatah terror group praised the architect for his choice, saying that it was “a victory in our nation’s struggle and an expression of faith in the justice of the Palestinian struggle for the return of our national rights,” the spokesperson said.

Barghouti is being nominated as a “symbol of human rights and the spirit of humanity’s survival,” the spokesperson said.

Barghouti, 56, was sentenced to five life sentences in 2002 after being convicted of multiple murder and attempted murder charges for attacks carried out by the al-Aqsa Martyrs’ Brigades on Israeli civilians and soldiers during the Second Intifada. He is considered one of the founders of Tanzim, one of Fatah’s armed terrorist factions, and has continued to exert great influence within the party even from prison.

In October, Barghouti wrote an op-ed for the British Guardian newspaper from his Israeli prison cell, in which he provided rationalization for Palestinian knifing and murder terror attacks against Jews. “The real problem is that Israel has chosen occupation over peace, and used negotiations as a smoke screen to advance its colonial project,” wrote Barghouti. “Every government across the globe knows this simple fact and yet so many of them pretend that returning to the failed recipes of the past could achieve freedom and peace… We cannot coexist with the occupation, and we will not surrender to it.”

Barghouti wrote, among other things, without mentioning the incitement to destroy Israel and kill Jews, that “this new Palestinian generation has not awaited reconciliation talks to embody a national unity that political parties have failed to achieve, but has risen above political divides and geographic fragmentation.”