Business AUTO REVIEW: Getting a Charge Out of the New Volt
Business 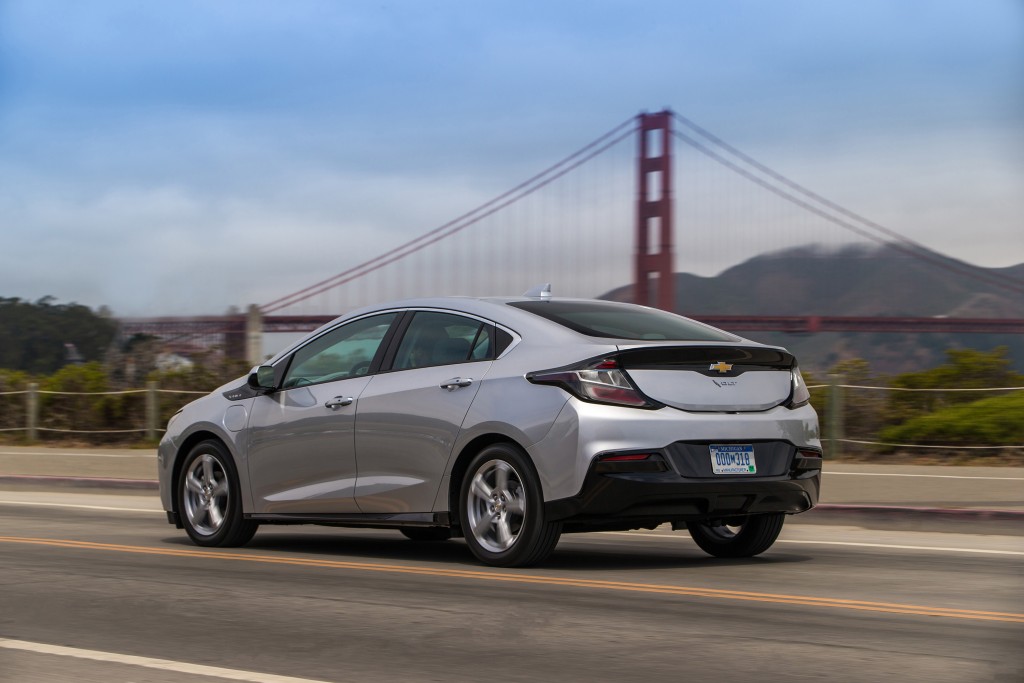 The 2016 Chevrolet Volt features a new body, a new motor and a new battery that give the vehicle more space, more power and greater range. It now seats five and can travel up to 53 miles on all-electric power between charges.

Quiet, comfortable, stylish and qualifying for government tax breaks and rebates, the Volt is a very appealing car. The 2016 model is even $1,200 cheaper than the 2015. GM also just announced it will offer $1,000 in rebates and incentives on the 2017 model in 11 states, according to CarsDirect.

So, why aren’t more people driving them?

Chevy introduced the Volt in late 2010 and quickly found a niche among buyers who wanted non-polluting green technology and access to the carpool lanes without having to suffer the “range anxiety” that accompanies many battery-electric vehicles.

Volt owners could drive around on electric charge, then let gasoline power take over when they ran out of charge and weren’t near a wall plug.

Electric range was about 30 miles, and total range was 10 times that. But 30 miles was enough for some commuters. I have a friend who plugs in his Volt every night when he comes home and says he has filled his gas tank only five times in three years.

Chevy boosted the electric range in the 2016 model to 53 miles by designing a more efficient electric motor, attached to an improved lithium-ion battery. When the battery runs out of charge, a 1.5-liter gas “range extender” — in essence a generator — powers the car.

The drive experience is very pleasant. Like all electric cars, the Volt is torquey, smooth and silent. Capable of reaching 30 mph in 2.6 seconds, almost the same rate as a Tesla, the Volt zips through traffic free of engine noise or vibration. On the freeway, it accelerates smoothly and confidently, even at higher speeds.

A committed driver can even apply a regenerative hand brake, instead of the foot brake, which uses the motor to slow the car down and refreshes the battery at the same time.

When the gas engine kicks in, the transition is gentle, and the engine noise rises only slightly. Recharging time is four to five hours on a 240-volt system and about 13 hours on a regular household 120-volt plug. Chevrolet supplies the charging cable, which tucks into a space that also includes a tire sealant and inflator kit in lieu of a spare tire.

The Volt has some forward-looking safety features. Traction control and stability control are standard. So is automated parking — the “Look Ma, no hands” feature that I adore because I’m such a clumsy parallel parker. It’s not as seamless as the one I tested on the Mercedes-Benz S550, but it does the job extremely well.

The Volt also comes standard with Apple CarPlay and, for 2017, Android Auto.

The second-generation Volt seats five, instead of four, with a bench back seat that replaces the previous generation’s double bucket seat configuration. But, it’s a limited five. The battery pack creates a big hump in the middle, so the fifth seat will either suit a very small person, a medium-size hound or a highly tolerant adult willing to be uncomfortable over a short haul.

The new version also includes some problems that even die-hard Volt fans dislike. Visibility through the rear hatchback window is limited. So is forward visibility. I found myself having to peer around the uncommonly wide windshield pillar.

Until 2016, the Volt was sold only in California and a handful of other markets. With the top three Volt markets being Los Angeles, San Francisco and San Diego, California remains the priority. But for 2017, Chevrolet will offer the Volt nationwide.

Despite its many charms, and its claim to be the bestselling plug-in hybrid in the world, the Volt doesn’t sell well. Only 15,402 Volts left the dealerships last year. The all-electric Leaf has outsold it in the U.S. for the last couple of years.

Why not more? The Volt’s main nemeses are the driving public’s general lack of familiarity with hybrid technology and the improvement in internal combustion engine efficiency.

Lots of potential buyers don’t know you can plug a hybrid into an ordinary household socket. Many seem not to understand that the gas engine will take over when the plug-in juice is gone. Despite General Motors’ concerted advertising efforts to inform drivers of the joys of the hybrid, otherwise knowledgeable people are surprised to learn you can drive a plug-in hybrid without ever plugging it in, if you choose.

Also, many old-fashioned gas engine cars now get 40 miles per gallon or more. (Even the Volt, on gas power only, gets 42.) That kind of economy amid lower gas prices reduces the perceived value of the more expensive plug-in hybrids.

“For a lot of consumers, paying the premium for a plug-in doesn’t pencil out,” said Patrick Min, industry analyst at TrueCar.

Higher gas prices could change that. So could lower vehicle prices. The standard Volt starts at $38,345. The model I drove cost $40,425. California buyers could qualify for up to $9,000 in state and federal rebates and tax deductions.

Chevy estimates that the average American consumer will pay only about $1.60 for the electricity required to fully charge the battery, which is less than it costs to buy 53 miles worth of gasoline. The U.S. Environmental Protection Agency sticker on the Volt says the average consumer will save $5,500 in fuel costs over five years.

But even with maximum government incentives the Volt is still a $30,000 car, and it’s competing against a field of less expensive cars with traditional power trains from Honda, Toyota, Nissan, Ford and other brands.

It’s not that easy being green, the frog said. And it’s still not that cheap.