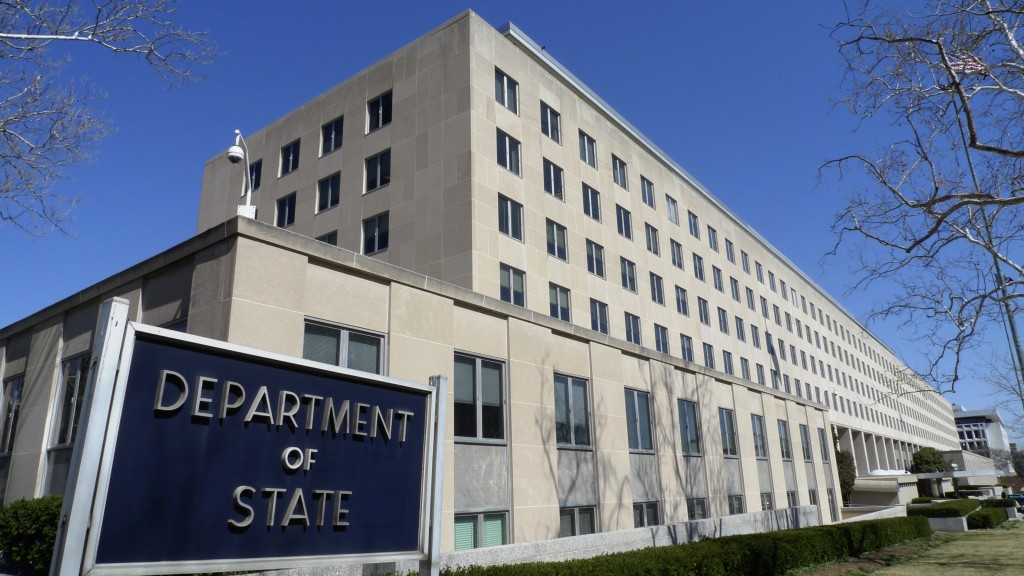 Hillary Clinton wrote 104 emails that she sent using her private server, while secretary of state, that the government has since said contain classified information, according to a new Washington Post analysis of Clinton’s publicly released correspondence.

The finding is the first accounting of the Democratic presidential front-runner’s personal role in placing information now considered sensitive into insecure email during her State Department tenure. Clinton’s authorship of dozens of emails now considered classified could complicate her efforts to argue that she never put government secrets at risk.

In roughly three-quarters of those cases, officials have determined that material Clinton herself wrote in the body of email messages is classified. Clinton sometimes initiated the conversations but more often replied to aides or other officials with brief reactions to ongoing discussions.

The analysis also showed that the practice of using non-secure email systems to send sensitive information was widespread at the department and elsewhere in government.

Clinton’s publicly released correspondence also includes classified emails written by about 300 other people inside and outside the government, the analysis by The Post found. The senders included longtime diplomats, top administration officials and foreigners who held no U.S. security clearance.

In those cases, Clinton was typically not among the initial recipients of the classified emails, which were included in back-and-forth exchanges between lower-level diplomats and other officials, and arrived in her inbox only after they were forwarded to her by a close aide.

For federal employees other than Clinton, nearly all of the sensitive email was sent using their less secure, day-to-day government accounts. Classified information is supposed to be exchanged only over a separate, more secure network.

The Post analysis is based on an examination of the 2,093 chains of Clinton’s email correspondence that the State Department decided contained classified information. The agency released 52,000 pages of Clinton’s emails as part of a court-ordered process but blocked the sensitive information from public view. The Post identified the author of each email that contained such redactions.

The analysis raises difficult questions about how the government treats sensitive information. It suggests that either material is being overclassified, as Clinton and her allies have charged, or that classified material is being handled improperly with regularity by government officials at all levels – or some combination of the two.

The analysis did not account for 22 emails that the State Department has withheld entirely from public release because they are “top secret,” the highest level of classification.

The handling of those emails has drawn particular criticism from Republican lawmakers and officials in the intelligence community, who have argued that Clinton’s use of a private server exposed some of the government’s most closely guarded secrets to hacking or other potential breaches.

The FBI is investigating the security of the server and whether Clinton or her aides mishandled classified information.

Clinton spokesman Brian Fallon said the large number of people who sent and received emails that were declared classified was a sign of “overclassification run amok, and indicates that our system for determining what ought to be classified is broken.”

Regarding Clinton’s role in writing 104 of the emails, Fallon said the classification determinations “were after-the-fact . . . for the purposes of preparing these emails for release publicly.”

“It does not mean the material was classified when it was sent or received,” he said.

A key question facing Clinton is whether any of the emails she authored – or any of the correspondence stored on her private server – contained information that was classified at the time it was sent.

When her use of a private system was first revealed, she told reporters, “I did not email any classified material to anyone on my email.” At other points, she has said that none of the emails was “marked classified” at the time she sent or received them – a point she reiterated Friday in a CNBC interview.

But government rules require senders of classified information to properly mark it. And the inspector general for the intelligence community has said that some of Clinton’s correspondence contained classified material when it was sent – even if it was not labeled.

The State Department has sidestepped the question.

Spokesman John Kirby said only that the department’s reviewers “focused on whether information needs to be classified today – prior to documents being publicly released.” State officials have not offered an assessment of whether the information was classified when it was sent.

The discrepancy has allowed Clinton to chalk up much of the email controversy to infighting among government agencies.

The 104 classified emails authored by Clinton are difficult to evaluate because of the heavy redaction in the versions that have been released.

They are generally short, running sometimes only a sentence or two.

The emails often were sent in response to another State Department official whose original note has also been redacted in the publicly released version.

In nearly a quarter of the emails, the only classified redaction is the subject line.

Across all the classified emails, the language that remains visible provides only hints of the conversations.

For example, Clinton wrote an email in July 2012 to Deputy Secretary of State William Burns and other top department officials with the subject line “Agrement [sic] for Egypt.” The email includes a short paragraph that has been entirely redacted by the State Department followed by one line from Clinton: “What’s the status?”

In another instance, Clinton engaged in an exchange with top aide Jacob Sullivan on June 7, 2012, all of which has been redacted and classified as “secret,” one of a few dozen messages to receive that higher-level designation from the State Department. The only indication of the exchange’s topic is the subject line: “Khar– where we are.” Earlier that week, Pakistani Foreign Minister Hina Rabbani Khar had requested that the United States apologize for the death of 24 Pakistani troops in a NATO airstrike.

Sullivan, a top foreign policy aide who now advises Clinton’s presidential campaign, was the most frequent author of classified emails. He wrote 215, the Post analysis found.

Sullivan did not respond to a request for comment. Fallon, the campaign spokesman, said that Sullivan generally sent Clinton more emails than others, “so there was simply more material available for government lawyers to overclassify.”

Other close aides to Clinton, including Chief of Staff Cheryl Mills and Deputy Chief of Staff Huma Abedin, also authored dozens of such notes. Top officials outside of State wrote some, too, including Clinton’s eventual successor at State, John F. Kerry, who was then a senator.

Representatives for Mills and Abedin did not respond to requests for comment. Kirby, the State spokesman, said Kerry had been “providing Secretary Clinton with information he thought would be helpful.”

But the bulk of the emails that State Department reviewers deemed classified were sent by career officials engaged in the day-to-day business of diplomacy.

Some diplomats point to the volume of classified email as evidence of systemic flaws in deciding what information is sensitive rather than an indictment of Clinton’s actions.

“If experienced diplomats and foreign service officers are doing it, the issue is more how the State Department deals with information in the modern world more than something specific about what Hillary Clinton did,” said Philip H. Gordon, who was assistant secretary of state for European and Eurasian affairs and was the author of 45 of the sensitive emails from his non-classified government account.

Kirby, the State Department spokesman, said the agency “takes the protection of sensitive information seriously and our staff are aware of the appropriate channels for transmitting classified information.”

“We stand by the redactions we have made,” he said.

Still, some diplomats who have reviewed their emails that have now been classified have expressed puzzlement.

They said they never stripped classified markings from documents to send them through regular email, as Republicans have alleged occurred in Clinton’s correspondence.

Instead, they said, the emails largely reflect real-time information shared with them by foreign government officials using their own insecure email accounts or open phone lines, or in public places such as hotel lobbies where it could have been overheard.

In other emails, they said they purposely wrote in generalities. Numerous emails were labeled “Sensitive But Unclassified,” indicating those writing did not think the note was classified.

Former ambassador Dennis Ross, who has held key diplomatic posts in administrations of both parties, said that one of his exchanges now marked “secret” contained information that government officials last year allowed him to publish in a book.

The emails relate to a back-channel negotiation he opened between Israelis and Palestinians after he left government service in 2011.

“What I was doing was communicating a gist – not being very specific, but a gist. If I felt the need to be more specific, we could arrange a meeting,” Ross said.

Princeton Lyman, a State Department veteran who served under presidents of both parties and was a special envoy to Sudan when Clinton was secretary of state, said he has been surprised and a bit embarrassed to learn that emails he wrote have been classified. He said he had learned through decades of experience how to identify and transmit classified information.

“The day-to-day kind of reporting I did about what happened in negotiations did not include information I considered classified,” he said.

One former senior official who authored some of the now-classified emails referred to a “cringe factor” for officials reviewing their own emails with the benefit of time that was often not available in the middle of unfolding world crises.

The former official, speaking on the condition of anonymity, expressed disagreement with the State Department’s decision to classify the emails. Still, the official said diplomats at the time believed they were sending the material through a “closed system” in which the emails would be reviewed only by other State Department officials. They are becoming public now, the official noted, only because of Clinton’s email habits and her presidential run.

The State Department staffer who managed Clinton’s server has turned over security logs to law enforcement officials showing no evidence of a foreign hack, the New York Times reported Thursday.

Nevertheless, Ron Hosko, former head of the FBI’s criminal investigative division, said Clinton’s use of the server offered a one-stop-shop for a would-be hacker or U.S. adversary looking to scoop up the totality of the sensitive information she was receiving.

“Piece by piece, it’s not particularly momentous,” said Hosko, who heads a law enforcement advocacy group whose board includes prominent conservatives. “But as a foreign adversary starts to aggregate that information, it becomes more and more concerning because of the ability to show you, who are the actors? What are our intentions? What is our understanding?”