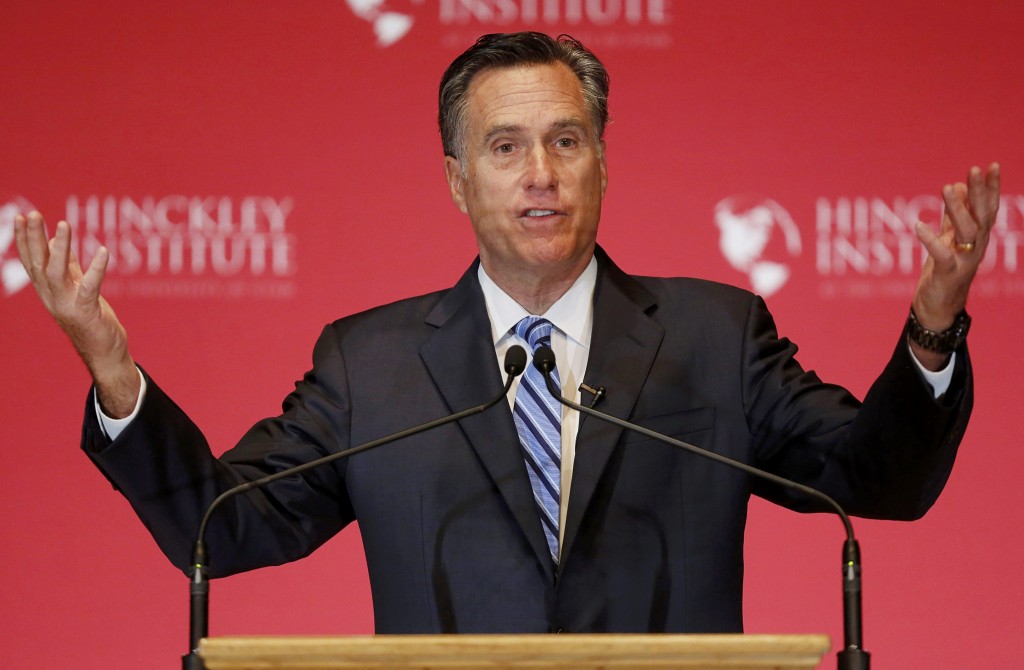 In an extraordinary display of Republican chaos, the party’s most recent presidential nominees, Mitt Romney and John McCain, lambasted current front-runner Donald Trump on Thursday, calling him unfit for office and a danger for the nation and the GOP.

“His is not the temperament of a stable, thoughtful leader,” Romney declared. He called Trump “a phony” who is “playing the American public for suckers,” a man whose “imagination must not be married to real power.”

Hours later, Trump lashed back, calling Romney “a choke artist” who lost to Barack Obama four years ago only because he was such a poor candidate.

The vicious feud marked a near-unprecedented scenario pitting the Republican Party’s most prominent leaders, past and present, against each other as Democrats begin to unite around Hillary Clinton.

Underlying the clash is a bleak reality for panicking Republican officials: Beyond harsh words, there is little they see to stop Trump’s march toward the presidential nomination. Party leaders are poring over complicated delegate math, outlining hazy scenarios for a contested national convention and even flirting with the idea of a third-party effort.

In the most notable verbal attacks against Trump to date, Romney and his 2012 running mate, House Speaker Paul Ryan, urged voters in the strongest terms to shun Trump for the good of country and party.

Romney embraced what might seem a long-shot approach to deny Trump the delegates necessary to secure the nomination. He did not call on Republicans to unify behind a single alternative candidate but outlined a plan to divide the electorate and force a contested national convention in July.

“Given the current delegate selection process, this means that I would vote for Marco Rubio in Florida, for John Kasich in Ohio and for Ted Cruz or whichever one of the other two contenders has the best chance of beating Mr. Trump in a given state,” Romney said.

Another idea rumbling through power corridors in Washington was the prospect of a late third-party candidate to represent more mainstream conservatives.

CNN, citing “a source close to Romney’s inner circle,” reported on Thursday afternoon that Romney had instructed close advisers to explore the possibility of stopping Trump at the Republican National Convention.

The source said that Romney’s advisers are looking into what a fight at the convention might entail and what rules may need revising.

“It sounds like the plan is to lock the convention,” the source said.

“While Romney is focused on suppressing Trump’s delegate count to prevent him from accumulating the 1,237 delegates he needs to secure the nomination,” reported CNN, “implicit in Romney’s request to his team to explore the possibility of a convention fight is his willingness to step in and carry the party’s banner into the fall general election as the Republican nominee.”

However, a Romney confidant, Republican National Committeeman Ron Kaufman, said such talk may be swirling around Romney, but he laughed it off. “It’s not happening,” he said.

Former Texas Gov. Rick Perry has been approached by “a mixture of people” about being part of a third-party bid, said Jeff Miller, who managed Perry’s failed GOP presidential campaign. But Miller said Perry found the idea “ludicrous.”

Suggesting that Romney may continue to have 2016 ambitions of his own, Trump said the 2012 nominee had “chickened out” earlier when he understood he’d be going up against the billionaire businessman.

“He doesn’t have what it takes to be president,” Trump said at a Portland, Maine, rally. “I made so much more money than Mitt.”

Romney’s views are irrelevant, he said. “Look, Mitt is a failed candidate.”

The back-and-forth came as the Republican candidates prepared for their first post-Super Tuesday debate, scheduled for Thursday night in Detroit.

Four years ago, Romney and Trump stood side by side in Las Vegas, with Trump saying it was a “real honor and privilege” to endorse Romney’s White House bid. Romney at the time praised Trump’s ability to “understand how our economy works and to create jobs for the American people.”

On Thursday, Trump said Romney “was begging me” for an endorsement that year.

“I could have said, ‘Mitt, drop to your knees.’ He would have dropped to his knees,” Trump said.

“If we Republicans choose Donald Trump as our nominee, the prospects for a safe and prosperous future are greatly diminished,” he said.

During his Capitol Hill press conference, Ryan dismissed comments Trump made this week that if the Wisconsin Republican didn’t get along with him, Ryan would “pay a big price.”

“I just laughed out loud,” Ryan told reporters. “Sometimes, reality is stranger than fiction around here these days.”

The speaker added that “conservatism is being disfigured” by some of Trump’s ideas and statements.

Voters have not so far responded to such warnings.

Trump padded his delegate lead with victories in seven Super Tuesday contests, with Cruz claiming three states and Florida Sen. Rubio picking up his first victory of the 2016 race.

Still, the front-runner is not yet on track to claim the nomination before the party’s national gathering in July, according to an Associated Press delegate count. He has won 46 percent of the delegates awarded so far, and he would have to increase that to 51 percent in the remaining primaries.

March 15 could be a last opportunity to stop Trump through the normal path of winning states and collecting delegates. A win for Rubio in his home state of Florida could raise questions about Trump’s strength, as could a win for Kasich, Ohio’s governor, on his home turf.

The GOP mayhem contrasts sharply with a clearer picture on the Democratic side, where Clinton is drawing broad support from voters and her party’s leaders. Rival Sen. Bernie Sanders has vowed to keep up his fight, though his path to the nomination has become exceedingly narrow.