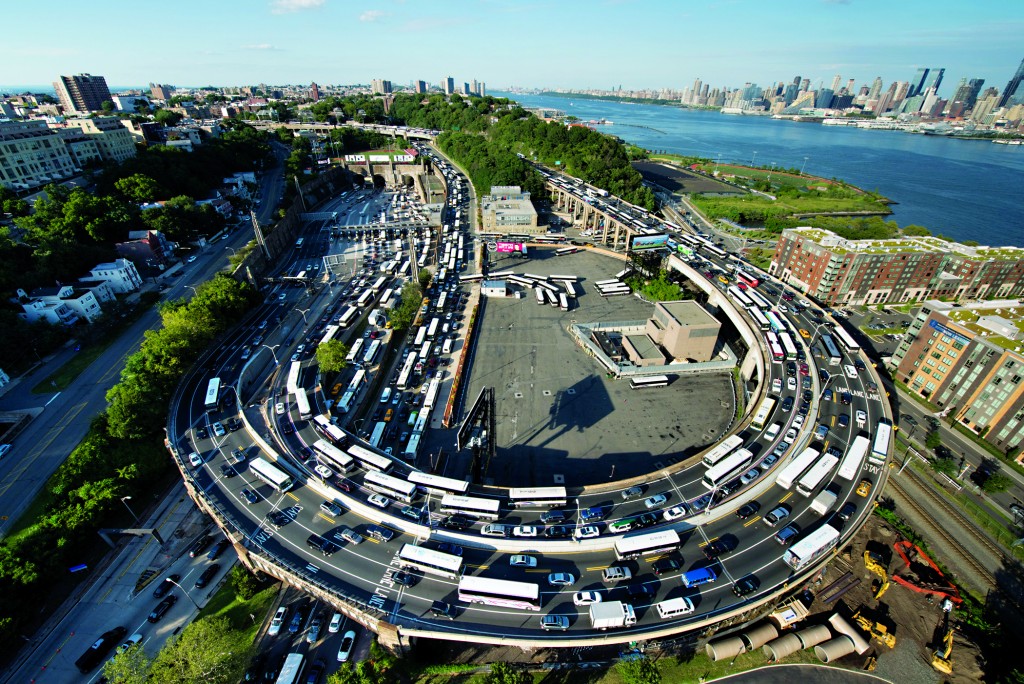 Thirty-three years later, as members of Congress try to head off a New Jersey Transit strike authorized for March 13, the nation’s third-biggest mass-transit provider again is counting on motor coaches to cross the Hudson River.

The Lincoln Tunnel, though, has no space for the traffic crush. Neither does Manhattan’s obsolete Port Authority Bus Terminal, the world’s busiest. At rush hour, New Jersey Transit’s bus drivers navigate some of the nation’s hairiest roads and merges, plus twisting ramps and narrow gates in a depot not designed for today’s wider, taller, heavier vehicles.

“Just hiring someone with the experience of driving a bus is a little different from, ‘Have you navigated the Lincoln Tunnel express bus lane and the Port Authority?’” said Michael Phelan, co-founder of the New Jersey Commuters Action Network. “What’s going to happen when you have amateurs driving into those tubes on a Monday morning?”

Transportation funding is at a crisis in New Jersey, whose economy relies on access to New York City, international airports and ocean terminals. On June 30, the state will have exhausted the five-year $8 billion fund for highway and rail, and leaders haven’t introduced a successor. The Gateway project, a $23.9 billion Amtrak proposal to remedy some of the tie-ups, won’t be ready until 2030.

Now, passengers may have to contend with a strike. The agency is “developing a robust alternative service plan,” Dennis Martin, the interim executive director, said by email. “We remain focused on reaching an affordable settlement with our rail unions.”

Martin said it was premature to disclose details of that alternative plan. A clue was in a newspaper advertisement seeking operators to provide a minimum 50 buses per day for routes that may include New York City.

That was the playbook in 1983, when 500 contracted buses took over during a strike that displaced 70,000 daily train riders. Today, Manhattan alone accounts for 87,130 of 295,173 train trips a day. Commuters who go by bus through the Lincoln Tunnel routinely endure miles-long backups, and on separate occasions last year, traffic was frozen for hours by a bus-depot fatality and a tunnel crash.

The sides have scheduled more talks, with a focus on medical costs and wage increases. Labor contracts expired in 2011 for 4,200 unionized rail workers. An emergency negotiating board appointed by President Barack Obama recommended that New Jersey Transit adopt the final offer made by the Rail Labor Coalition, representing 11 unions, at a cost of $183 million.

The offer called for a six-and-a-half-year contract with annual raises of 1.5 percent to 3.5 percent and a maximum 5 percent annual health-care contribution, according to the presidential board report. New Jersey Transit’s offer of 7 1/2 years skipped raises for 2011, awarded $1,000 lump-sum payments for 2012 and had annual increases of 1 percent to 2.5 percent. Employees were to cover as much as 20 percent of their medical costs.

New Jersey Transit said the state can’t afford the recommendation. Then-Executive Director Ronnie Hakim said that under federal rules, the railroad has reached the maximum diversion of capital funding to operating costs. Higher fares, “aside from its political unacceptability, would divert riders,” the panel wrote.

Marty Robins, chief negotiator for New Jersey Transit during the 1983 strike, said the labor issues are thornier this time, with riders caught between a long-expired contract and a potential budget hit.

“This is an emergency situation,” he said. “You can’t try to jam any huge number of people into the Port Authority, and you still have the Lincoln Tunnel issue.”

NJ Transit has a spotty history of handling events and emergencies.

When a major football game took place at MetLife Stadium in 2014, the agency planned to transport as many as 13,500 fans by rail. Instead, three times as many bought tickets, and thousands were left waiting at the stadium for hours when the train line was overwhelmed and back-up buses were sent elsewhere.

As Hurricane Sandy approached in 2012, NJ Transit, defying a consultant’s warning, stashed a third of its rail fleet in low-lying yards. Flooding caused at least $120 million in damage.

“They have this fantasy that everyone can work from home for a few days,” he said. “Believe me, if I could do that, I’d be doing it already.”