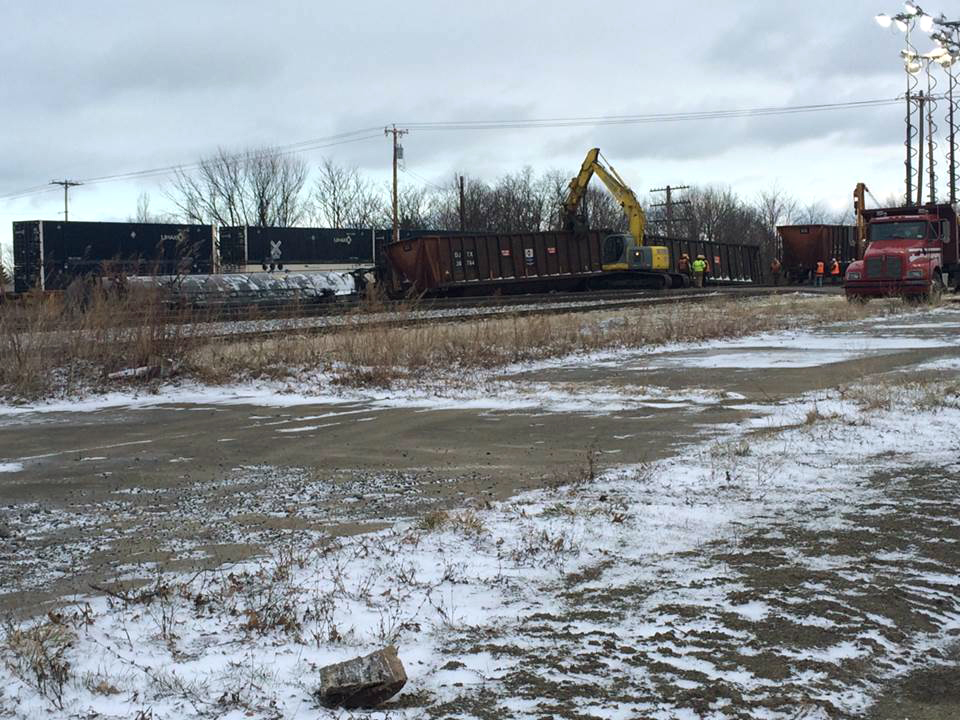 Crews worked Wednesday to clear the site of a 16-car Norfolk Southern freight train derailment that forced the evacuation of dozens of western New York homes after ethanol leaked from two tankers.

A spokesman for the rail company and police said the train left the tracks around 9:30 p.m. Tuesday in the town of Ripley, which sits along Lake Erie, near the Pennsylvania border about 60 miles southwest of Buffalo.

No one was injured and there was no fire, emergency response officials said, but two of the derailed cars contained ethanol that leaked. Chief Mark Smith of the Ripley Volunteer Fire Department said the leaks from both cars were contained Wednesday morning.

A state of emergency is in effect in the town, Smith said.

There was no immediate word on what may have caused the accident.

Dozens of firefighters who responded to the scene endured 20-degree temperatures, snow, freezing rain and winds that gusted to 30 mph overnight, emergency officials said. Heavy equipment was brought in to right the overturned cars, while the remaining ethanol was being transferred from the derailed tankers to trucks, Smith said.

Between 50 and 55 homes in the town of about 2,400 were evacuated due to the potential risk of an explosion and fire the ethanol and propane posed, Smith said.

“It could have been a lot worse,” he said.

Nearby schools were closed and about 30 residents were given assistance at a shelter set up at a local church, officials said.

The derailment occurred on one of four sets of tracks along a stretch of rails running through a section of town located just a couple OF miles from the Lake Erie shoreline in western Chautauqua County.

All four tracks were shut down for a time, but one was reopened to CSX freight traffic a few hours after the derailment. There was no immediate estimate on when the other three tracks would be cleared for traffic that includes Amtrak passenger trains and other freight trains, Smith said.

The accident has interrupted Amtrak passenger service between Chicago and New York City. Amtrak said the eastbound Lake Shore Limited is being stopped Wednesday at Cleveland while the westbound train is being halted at Buffalo. Buses are being used to ferry passengers in both directions to stations in the two cities.

“We want to make sure we get life back to normal, train traffic back to normal, as soon as we can, but we have to do this safely,” said Norfolk Southern spokesman David Pidgeon.

Gov. Andrew Cuomo said in a statement issued at 1:10 a.m. Wednesday that the derailment had occurred “at approximately 11:20 p.m. Tuesday.” His office later corrected the time of the derailment to 9:39 p.m. but offered no explanation for the mistake.