National Change in Command of U.S.-NATO Forces in Afghanistan
National 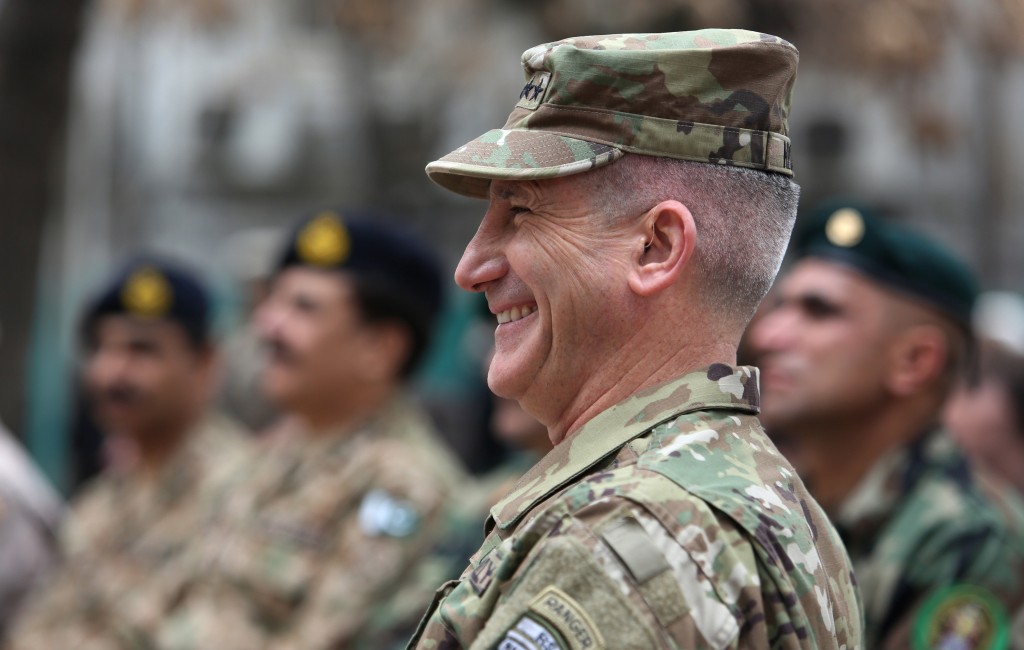 Nicholson, 58, took over from U.S. Army General John F. Campbell, who oversaw the end of the international combat mission in 2014 and a subsequent escalation in the Taliban’s war against Kabul.

In a ceremony at the headquarters of the U.S.-NATO Resolute Support mission in Kabul, Nicholson thanked NATO representatives for standing by the U.S. after the September 11, 2001 attacks on “the homeland.”

To the “enemy,” he said: “I know you. You have brought only hardship and suffering to the Afghan people.”

Nicholson served in Afghanistan three times between 2006 and 2012. Most recently he was commander of NATO’s Allied Land Command in Izmir, Turkey.

He takes command of around 13,000 international troops, including 9,800 Americans, in Afghanistan. The RS mandate is focused on training and assisting Afghan forces as they take on the insurgency largely on their own.

Around 3,000 of the U.S. troops are engaged in counter-terrorism operations against the Taliban, al-Qaida and —following a recent extension of their mandate by President Barack Obama — the Islamic State terror group, which has a nascent presence in some volatile regions of Afghanistan.

He takes control of the Afghan theater as the Taliban are extending their reach to previously peaceful areas, notably the northern provinces bordering the Central Asian states, and escalating the war in their southern heartland provinces. In recent months, the terrorists have threatened most districts of Helmand. Intra-Taliban fighting in Helmand has been taking place over control of the lucrative smuggling routes for men, arms, contraband and minerals, officials have said.

At Wednesday’s ceremony, Nicholson told assembled guests — who included Pakistan’s army chief Gen. Raheel Sharif — that he traveled to Helmand earlier this week. “I wanted to meet our leaders, look them in the eye, shake their hands and assure them of our commitment to this partnership and the importance of what they are doing,” he said, referring to Afghan leaders.

A four-star general, Nicholson returns to Afghanistan as the government of President Ashraf Ghani hopes to kick-start a peace process aimed at bringing the Taliban leadership into a dialogue with the goal of ending the war. The endgame is not likely for many months or even years, though Kabul has said it expects its representatives to have face-to-face talks with Taliban figures in the coming weeks.

In the meantime, violence has spiked as the terrorists seek to prove their superiority on the battlefield ahead of any peace talks. Thanks to a greater number of men, alliances with other terror groups such as the Islamic Movement of Uzbekistan, and a determined new leader, Mullah Akhtar Mansoor, the insurgency has managed to give the impression of greater strength against the Afghan government forces.

Their capture of the northern city of Kunduz in September — which terrorists held for three days and fought over for more than two weeks — spooked many Afghans. Their faith in their government’s ability to end the war was already shaky before the temporary fall of Kunduz, the Taliban’s first seizure of a major urban center since they were forced from power by the U.S. invasion of 2001.

The United Nations mission in Kabul reported last month that 3,545 civilians were killed in 2015 as a result of the war, with another 7,457 wounded. The figures mark a 4-percent drop in civilian deaths, but a 9-percent rise in civilian injuries, compared to 2014.

Campbell’s departure follows his successful lobbying last year to maintain troop numbers at current levels through most of 2016.

His final year in the role was clouded by the Oct. 3 American air attack on a hospital run by the international charity Doctors Without Borders in Kunduz, which Campbell said was a mistake. The sustained attack left 41 civilians dead and raised questions about his command. He is set to retire.