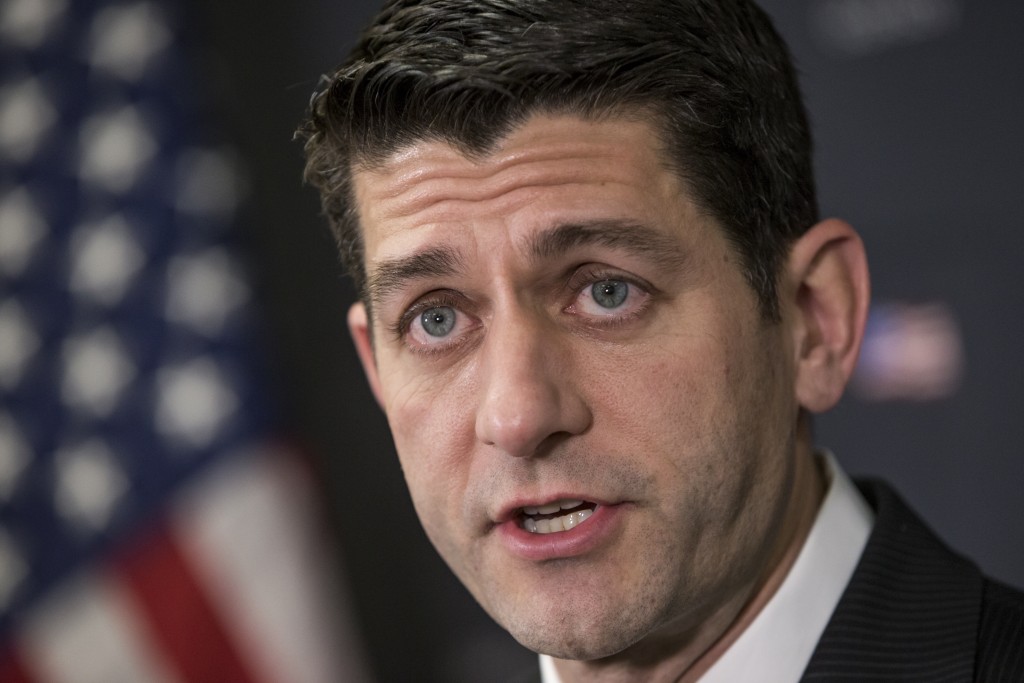 The rebuke of Trump came as GOP voters went to the polls in 11 states in a “Super Tuesday” of balloting that many Republicans fear could give the combative and controversial New Yorker unstoppable momentum toward claiming the GOP presidential nod.

“This party does not prey on people’s prejudices. We appeal to their highest ideals. This is the Party of Lincoln,” Ryan told reporters.

At the same time, Ryan reiterated that he will support the eventual GOP presidential nominee.

Never mentioning Trump’s name, Ryan and McConnell were clearly referring to the billionaire businessman’s appearance Sunday on CNN when he declined to disavow the support of Duke and other white supremacists.

Duke served as a Republican in the Louisiana state legislature in the early 1990s.

“When I see something that runs counter to who we are as a party and a country I will speak up. So today I want to be very clear about something: If a person wants to be the nominee of the Republican Party there can be no evasion and no games. They must reject any group or cause that is built on bigotry,” Ryan said.

Last year, Ryan and McConnell disavowed Trump’s plan to block Muslims from entering the U.S. Otherwise, they’ve tried to stay clear of commenting on the race.

But House Democratic leader Nancy Pelosi argued that “Trump’s radical agenda” reflects the House Republican conference. Pelosi said that while some in the GOP are distancing themselves from Trump, Republicans refused to remove the Confederate flag from the Capitol grounds and have blocked renewal of the Voting Rights Act.

“The reality is, Donald Trump is just being more candid about the agenda of discrimination House Republicans have been advancing for years,” Pelosi said in a statement.

Top Senate Democrat Harry Reid of Nevada noted that both GOP leaders say they expect to support the eventual nominee.

“Republicans say they’ll support a man who refuses to denounce the KKK so until they withdraw their support, talk is really cheap,” Reid said.

“Some of us feel like we have a responsibility to speak out when he makes outlandish, crazy statements like the Muslim ban or a number of others,” said Sen. Jeff Flake (R-Ariz). On Trump and the Klan, Flake added: “To blame it on a faulty earpiece, people know. ‘KKK’ is pretty easy to hear.”

On Tuesday, USA Today reported that a group of about 30 African-American students from Valdosta State University were kicked out of a Trump rally by law enforcement officials.

“The only reason we were given was that Mr. Trump did not want us there,” 22-year-old senior Brooke Gladney told the newspaper. The campaign denied any role in their ouster from the event.

Ryan, the GOP’s 2012 vice presidential nominee, bemoaned the current discourse in the GOP and said it was time to get back to focusing on how Republicans would solve the nation’s problems.

Many Washington Republicans are increasingly open about their dismay at the prospect of Trump winning the GOP nomination.

“The way he’s gotten people behind him kills you in a general election,” said Sen. Lindsey Graham of South Carolina, who dropped out of the race last year due to poor poll numbers. “Seventy percent of his support comes from people who want to deport them all and want to ban all Muslims.”

McConnell was asked twice about a New York Times report that he said in a closed-door party meeting that down-ballot Republicans might drop Trump “like a hot rock,” and he responded with a classic Washington non-denial.

“I don’t remember saying anything like that to all of you,” McConnell told reporters.

Last month, Trump took a swipe at Ryan, saying the GOP lost the White House in 2012 because the vice presidential candidate was synonymous with a budget that targeted Social Security. That, according to Trump, cost Republicans with seniors.

Ryan rejected that argument on Tuesday, saying he and Mitt Romney won the senior vote by 12 percentage points, “the best performance a Republican ticket has had since 1984 when Ronald Reagan had a landslide election.”