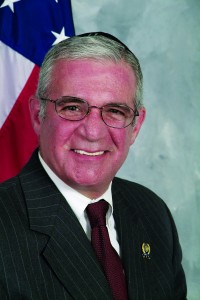 A bill that would significantly increase security funding for non-public schools is heading for a committee hearing in the New Jersey State Assembly this coming Thursday. If passed, it would increase the present allotment from $25 to $144 per student.

Assemblymen Gary Schaer and Joseph Lagana, both Democrats representing the Bergen and Passaic areas, spearheaded legislation last year that made funding a fixed part of the state’s budget. It was the first time in 20 years that a permanent item was added for non-public schools, but amid increasing terror threats, especially to Jewish institutions, the proposal passed easily. Now, Assemblyman Schaer has introduced a bill to raise the funding level to meet the amount awarded to public school students.

“New Jersey has an equal obligation to protect all of its children, be they public school students, yeshivah students, or whether they attend parochial schools of any faith,” Schaer told Hamodia.

Public school districts throughout the state receive vastly differing amounts of security funding. Assemblyman Schaer said that Fairlawn receives $20 per child, while Newark gets $430. The figure of $144, he said, is based on a statewide average.

Rabbi Avi Schnall of Agudath Israel’s New Jersey division said that funds allotted over the past year have been used by many mosdos to install security cameras and to re-enforce windows and doors, but that this increase would allow many to hire full-time security guards. New Jersey has over 140,000 non-public-school students, roughly 25,000 of whom are from the quickly growing Lakewood community.

“We don’t expect strong opposition,” said Rabbi Schnall, who will be testifying at Thursday’s committee hearing, together with lobbyists from other religious groups. “They are all the state’s children and deserve to be protected.”

The bill calls for funds to be awarded under the same framework as those already in place. Grants must be used exclusively for security expenses and usage must be approved by the district superintendent. However, it is up to each institution to determine how funds will be applied.

“We do not want to dictate to [schools] how they should use the money; each one has its own needs,” said Schaer. He noted that the implementation of a similar program for New York City schools was an encouraging sign for his efforts on the issue. He emphasized that the bill, however, does not mirror New York’s requirement for schools to have a minimum of 300 students, saying that his district had many small yeshivos.

Despite consensus over the need to protect school children, Schaer, who chairs the Assembly’s budget committee, admitted that finding available funds would involve making “hard choices.” Nevertheless, he felt it was imperative to find a solution, adding that the total needed to fund the bill, $24 million, was not a major item in the state’s $34 billion budget.

“The question is: Can the state afford not to do it; can we afford to have children going to school where their safety and lives could be in jeopardy?”

This article appeared in print on page 31 of the March 2nd, 2016 edition of Hamodia.