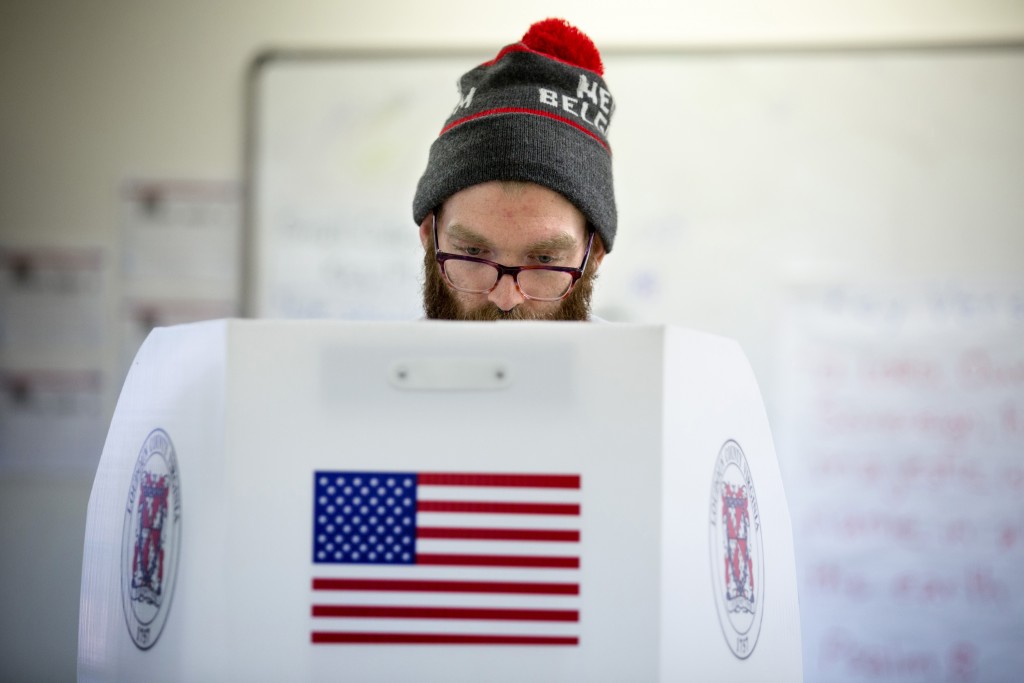 As polls closed, Donald Trump was projected to win the Republican primary in Virginia, a key bellwether among a dozen states holding nominating contests on Super Tuesday.

Desperate for his first primary victory, Rubio devoted significant resources to the Commonwealth in the last weekend before voting, hoping that affluent professionals in the Washington suburbs would propel him past the combative billionaire.

Turnout around the state appeared to be strong, particularly among Republicans, with many first-time primary voters. Arlington ran out of Republican ballots, said John Whitbeck, chairman of the state GOP.

In Alexandria and Fairfax, more people had voted Republican by midday on Tuesday than did by the close of voting on primary day in 2008, the last time there was no incumbent running for president. Veteran Alexandria precinct captain Mike Lane called the turnout “exceptional,” and “incredibly unexpected.”

Trump was counting on a decisive victory in Virginia to solidify his lead in the nominating process and add to the growing evidence that he appeals to a broad swath of Republican voters, from blue collar workers to college graduates to evangelical conservatives.

Clinton’s commanding victory in Virginia is likely to help dispel doubts about her viability as the Democratic nominee and position her strongly for the fall contest in a state that is crucial to both parties. In preliminary exit polls, more than eight in 10 Virginia Democrats said they wanted a president who is a mainstream candidate, as opposed to someone outside the political establishment.

A third of the Democratic electorate identified “experience” as a key quality in a candidate, topping any other attribute.

“The momentum is clearly in Hillary’s direction,” said Mark Rozell, a political science professor at George Mason University. “The fact that voters are choosing experience over an outsider is so different than the Republican side right now – and that’s her calling card.In a year that’s supposed to be all about outsiders, she’s proving that experience still matters and that many voters want a certifiably qualified person as president.”

While Democrats in Virginia prized experience, Republicans were looking for a candidate to challenge the political establishment.

More than one in three Republicans in the state said the quality they most want in a presidential candidate is an ability to “bring needed change,” according to preliminary exit polls.

Fewer than two in 10 Republicans said a candidate’s ability to win in November’s general election was the most important quality, and a similar share said they want a candidate who “tells it like it is.”

In interviews with the Washington Post over the last week, Trump’s supporters in the Commonwealth repeatedly said they liked the billionaire for his ability to roil Washington. But an equal number – three in 10 – said they were seeking a candidate that “shares their values”, a theme that both Rubio and Texas Sen. Ted Cruz stressed in their campaign visits to the state.

“I think the change vote is one that is most important for Trump,” said Robert Holsworth, a retired Virginia Commonwealth Univeristy political science professor. “The big question is how does Trump do in the Northern Virginia suburbs and the Richmond suburbs. For Republicans to win in November, Trump has to be a good candidate in the suburbs – and it’s an open question whether he is.”

As polls closed, Cruz and Ohio Gov. John Kasich were fighting it out well below Trump and Rubio, jockeying for the third and fourth spots.

In Alexandria and Fairfax, more people had voted Republican by midday on Tuesday than did by the close of voting on primary day in 2008, the last time there was no incumbent running for president. There were more absentee and early voters in Arlington, Alexandria and Fairfax this year than there were in 2008.

In Loudoun County, an exurb of Washington, turnout by late afternoon was on pace to match 2008. But registrar Judy Brown said that there too, Republican interest was higher. “We’ve got more Republicans voting now than Democrats,” Brown said. “In 2008, we had more Democrats voting than Republicans.”

Prince William County only had scattered reports by mid-afternoon. But Republicans in that county also appeared to be voting in higher numbers than the past, said election communications coordinator Winston Forrest.

After voting in Prince William, Jim Collins, 62, a building inspector, said he pulled the lever for Trump, even though he isn’t convinced the billionaire will win in November.

“While he may not make the presidency, he’s definitely put things on the table that the other candidates have to address,” Collins said. “That’s what I like about him.”

At the Herndon Community Center, where a mix of Hispanic and Asian immigrants joined the growing stream of voters all morning, several Hispanics said they had chosen Clinton and were offended by the negative comments Trump had made about Mexicans and illegal immigrants.

Karen Gonzaga, 37, said she liked Trump “but I’m not ready for him – he’s too extreme.” Instead, she voted for Rubio, in part because she thinks he would restore political peace in Washington.

“Everything is so chaotic now,” she said. “We have to be a democracy and talk to each other.”