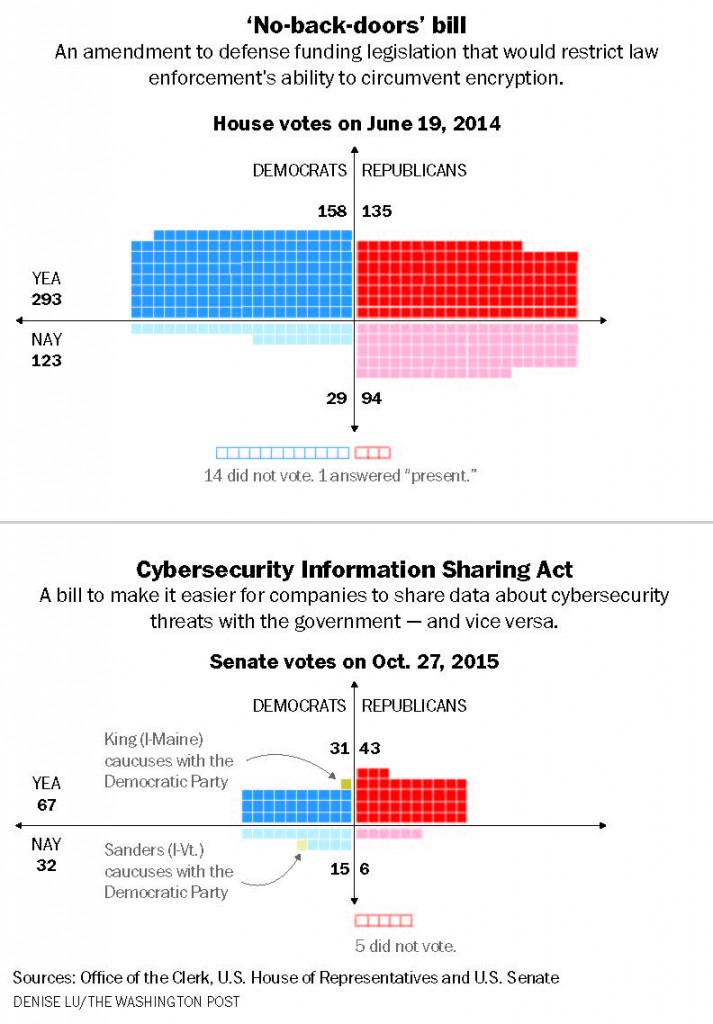 Apple reiterated its request Tuesday that Congress rule on whether the FBI can force the company to help authorities unlock iPhones in criminal cases.

But relying on Capitol Hill is a risky strategy for Apple. An analysis of voting patterns in major privacy and security legislation over the past two years shows that the company may be facing an uphill battle, especially in the Senate, where lawmakers have consistently voted to empower intelligence officials.

The voting record also reveals that the legislative body has not broken evenly along partisan lines. Democrats are particularly split, analysts say, between more hawkish members and those more aligned with Silicon Valley.

And although some Republicans take the libertarian view that the government should not be able to spy on Americans’ technology, many others find themselves drawn toward strong national security arguments.

In 2014, for instance, several House members proposed an amendment to a yearly defense funding bill that aimed to limit the government’s ability to circumvent encryption – the technology that protects digital data from prying eyes. The amendment ultimately was included in the defense authorization bill, which was approved by both chambers and signed into law by President Obama.

Because the defense bill is a vast, sprawling piece of legislation, it is useful to focus on the House vote on whether to include the “no back doors” amendment introduced by Reps. Zoe Lofgren, D-California, and Thomas Massie, R-Kentucky. That vote saw House Democrats and Republicans approve the amendment in overwhelming numbers, with the measure passing 293 to 123.

The split shows that a vote on the Apple-FBI matter may not come down along party lines. Indeed, some top Democrats are likely to side with the FBI because they have voted with national security interests in the past, said a left-leaning lobbyist who spoke on the condition of anonymity in order to talk more freely.

“It’ll be interesting to see what Democrats do,” said the lobbyist. “[The Apple-FBI fight] splits us a little bit.”

The USA Freedom Act was approved by both the House and Senate last summer. Although it proposed to end the National Security Agency’s practice of collecting millions of Americans’ phone records in bulk, it also gave intelligence officials the opportunity to resurrect the program in a different form with greater restrictions.

In the end, the bill passed the Senate by a vote of 67 to 32. The USA Freedom Act is one of the few bills in the recent debate over security and civil liberties that received votes in both chambers, contained comparable language in both and had a recorded vote tally. But its compromise nature makes it hard to draw clear conclusions about why lawmakers voted the way they did.

Looking ahead, expect various House committees to come up with “dueling legislation” on the Apple-FBI battle, said one Republican congressional staffer, who spoke on the condition of anonymity because the discussions are private. The different flavors of these bills could spark a divide among conservatives.

The Cybersecurity Information Sharing Act is one of the clearest examples of a bill that divided lawmakers on the question of privacy. Widely panned by privacy advocates, CISA drove Sens. Patrick J. Leahy, D-Vermont, Ron Wyden, D-Oregon, Christopher A. Coons, D-Delaware, Al Franken, D-Minnesota, and Dean Heller, R-Nevada, each to offer changes that were shot down by proponents of the bill, such as Sens. Dianne Feinstein, D-California, and Richard Burr, R-North Carolina.

Apple made clear in this case that it disagreed with the legislation. The company told The Washington Post that it did not support CISA days before the Senate approved the bill 67 to 32.

Although the House did not take a recorded vote on CISA – the measure later wound up in a giant budget bill passed by both chambers and signed by Obama – the Senate’s decision to overwhelmingly approve a bill that Apple criticized reflects how little its voice shifted the balance.

There are “very few members that you can say are supportive of Apple” specifically, said a former congressional staffer, who spoke on the condition of anonymity in order to talk more freely.