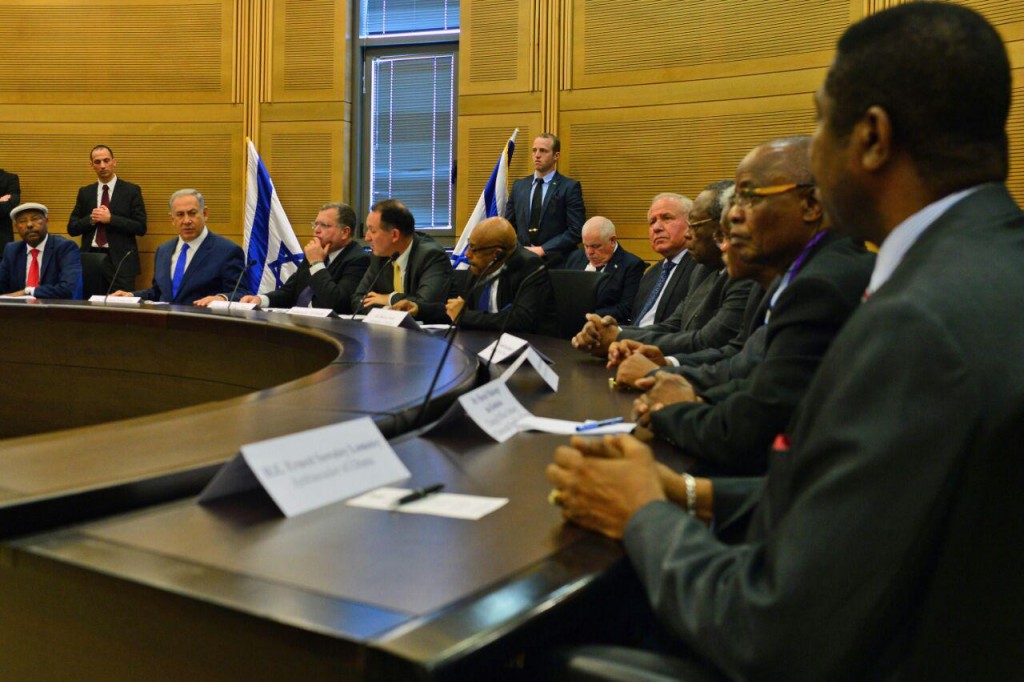 Prime Minister Binyamin Netanyahu intends to visit Africa this year – making him the first Israeli head of state to visit the continent since Golda Meir did so nearly fifty years ago.

Netanyahu attended the launch of the Knesset Caucus for Israel-Africa Relations, which was initiated by MK Dr. Avraham Naguisa. Knesset Speaker Yuli Edelstein, MKs and African ambassadors were also in attendance. The prime minister spoke with the ambassadors, all of whom invited him to visit their countries.

“I intend to do so around the 40th anniversary of the raid at Entebbe that was for us a very dramatic national experience,” Netanyahu said at a meeting of the Likud Knesset faction. “For me, obviously, one of great personal consequence, but we view that as an opportunity to give practical meaning to what I said before: Israel is coming back to Africa; Africa is coming back to Israel.”

The “great personal consequence” Netanyahu was referring to was, of course, the death of his brother Yoni, Hy”d, at the hands of Ugandan soldiers during the Israeli rescue operation at Entebbe. Israel Air Force planes raided the airport under the nose of then Ugandan leader Idi Amin on July 4, 1976, to rescue the Israeli and Jewish passengers of an Air France plane who were being held hostage after the plane was hijacked and forced to land in Uganda.

“Israel is coming back to Africa; Africa is coming back to Israel. It’s happening in a big way,” said Netanyahu. “It’s happening now, but it should have happened a long time ago. It’s happening now because it’s so clear that this is good for Africa and it’s good for Israel. We face a multitude of challenges and opportunities. Both as prime minister and as foreign minister, we are making a deliberate, what I call African strategy, and I’ve received an invitation from the president of Kenya and from others to come and visit Africa.”

Netanyahu noted that, “The greatest challenge we face together – the entire world faces – is the surge of Islamist extremism and the terrorism that it espouses. It threatens every land in Africa. In my opinion, it threatens the entire globe. Its nexus is in the Middle East, but it is rapidly spreading.

“I think that many countries from Africa, and may I say not only from Africa, are coming to Israel because of a demonstrated capacity to stand up to the forces of Islam terrorism, do battle with them, roll them back. And we are prepared to put our expertise at your disposal. That’s the first reason that there has been such a marked change in the appreciation of Africa and Israel to one another.

“Israel is ready to help in every way – in agriculture, in health care, in water, in irrigation, in science, in technology, in investment, tourism, cyber. Every country can be brought to its knees today if it doesn’t have adequate cyber protection, just for the basic services that you have – communications, banking, airlines and so on. And Israel is now a world power in cyber security and my policy is to make some of our experience available to our friends. We consider you great friends. So we want to be able to cooperate with you in these two fields: fighting the forces of terror and seizing the opportunities of tomorrow. And they go hand in hand,” concluded Netanyahu.

Kenyan President Uhuru Kenyatta visited Israel last week, signing with Netanyahu a joint statement focusing on cooperation on water and agricultural issues, and establishing a joint bilateral committee to develop projects together. The two countries have for decades coordinated in these areas; among other things, hundreds of Kenyans over the years have been brought to Israel for training on better farming techniques.