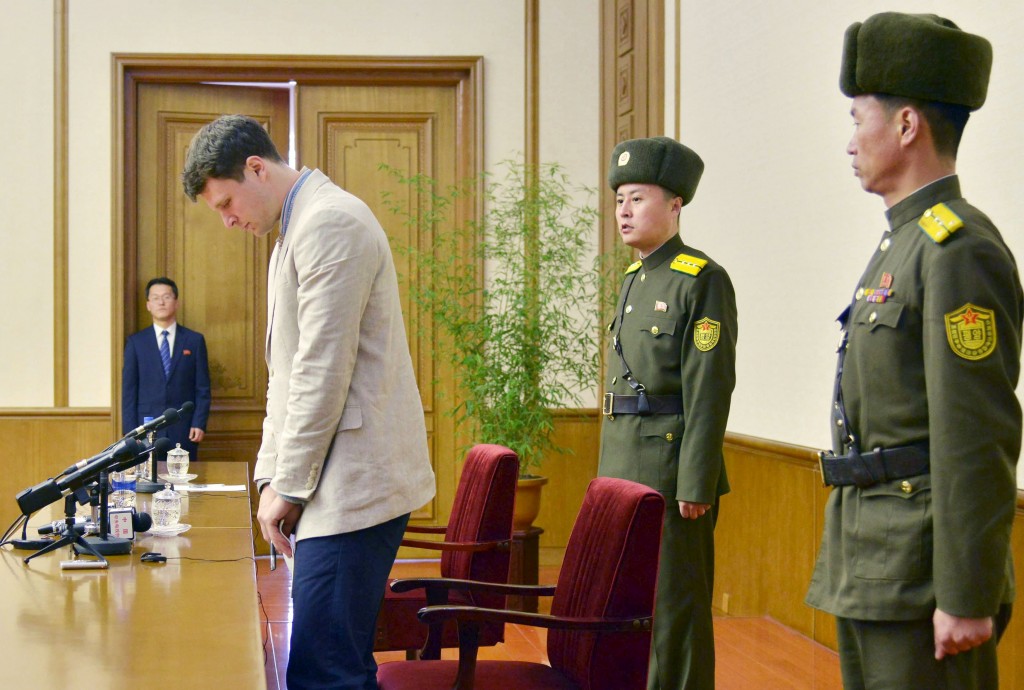 North Korea presented a detained American student before the media on Monday in Pyongyang, where he tearfully apologized for attempting to steal a political banner – at the behest, he said, of a member of a church back home who wanted it as a “trophy” – from a staff-only section of the hotel where he had been staying.

North Korea announced in late January it had arrested Otto Warmbier, a 21-year-old University of Virginia undergraduate student. It said that after entering the country as a tourist he committed an antistate crime with “the tacit connivance of the U.S. government and under its manipulation.”

No details of what kind of charges or punishment Warmbier faces were immediately released. According to Warmbier’s statement Monday, he wanted the banner with a political slogan on it as a trophy for the church member, who was the mother of a friend.

In previous cases, people who have been detained in North Korea and given a public confession often recant those admissions after their release.

He was arrested while visiting the country with Young Pioneer Tours, an agency specializing in travel to the North, which is strongly discouraged by the U.S. State Department. He had been staying at the Yanggakdo International Hotel, which is located on an island in a river that runs through Pyongyang.

It is common for sections of tourist hotels to be reserved for North Korean staff and off-limits to foreigners.

Warmbier is a native of Ohio, and Ohio Gov. John Kasich, while campaigning in New Hampshire as a Republican presidential candidate, called the arrest “inexcusable.” Kasich has urged President Barack Obama to “make every effort to secure Mr. Warmbier’s immediate release and keep (his) family constantly apprised.”

Kasich said North Korea should either provide evidence of the alleged antistate activities or release Warmbier.

In his comments, Warmbier said he was offered a used car worth $10,000 by a member of the church. He said the church member told him the slogan would be hung on its wall as a trophy. He also said he was told that if he was detained and not returned, $200,000 would be paid to his mother in a way of charitable donations.

Calls to the Friendship United Methodist Church went unanswered Monday. Warmbier named that as the church his acquaintance belonged to and there is a church of that name in his hometown, Wyoming, Ohio.

He said he was also encouraged in his act by the “Z Society” at the University of Virginia, which he said he was trying to join. The magazine of the university’s alumni association describes the Z Society as a “semi-secret ring society” that was founded in 1892 and conducts philanthropy, puts on honorary dinners and grants academic awards.

Warmbier said he accepted the offer of money because his family is “suffering from very severe financial difficulties.”

“I started to consider this as my only golden opportunity to earn money,” he said, adding that if he ever mentioned the involvement of the church, “no payments would come.”

North Korea regularly accuses Washington and Seoul of sending spies to overthrow its government to enable the U.S.-backed South Korean government to control the Korean Peninsula. U.S. tourism to North Korea is legal and virtually all Americans who make the journey return home without incident.

Even so, the State Department has repeatedly warned against travel to the North. Visitors, especially those from America, who break the country’s sometimes murky rules risk detention, arrest and possible jail sentences.

The Young Pioneer agency, based in China, also has tours to Iran, Cuba, Turkmenistan, Iraq and other former Soviet countries. After Warmbier’s detention, Young Pioneer stressed in a news release that he was the first of the 7,000 people it has taken to North Korea over the past eight years to face arrest.

“Despite what you may hear, North Korea is probably one of the safest places on Earth to visit,” it says on its site.

In the past, North Korea has held out until senior U.S. officials or statesmen came to personally bail out detainees, all the way up to former President Bill Clinton, whose visit in 2009 secured the freedom of American journalists Euna Lee and Laura Ling. Both had crossed North Korea’s border from China illegally.

It took a visit in November 2014 by U.S. spy chief James Clapper to bring home Matthew Miller, who had ripped up his visa when entering the country, and Korean-American missionary Kenneth Bae, who had been incarcerated since November 2012.