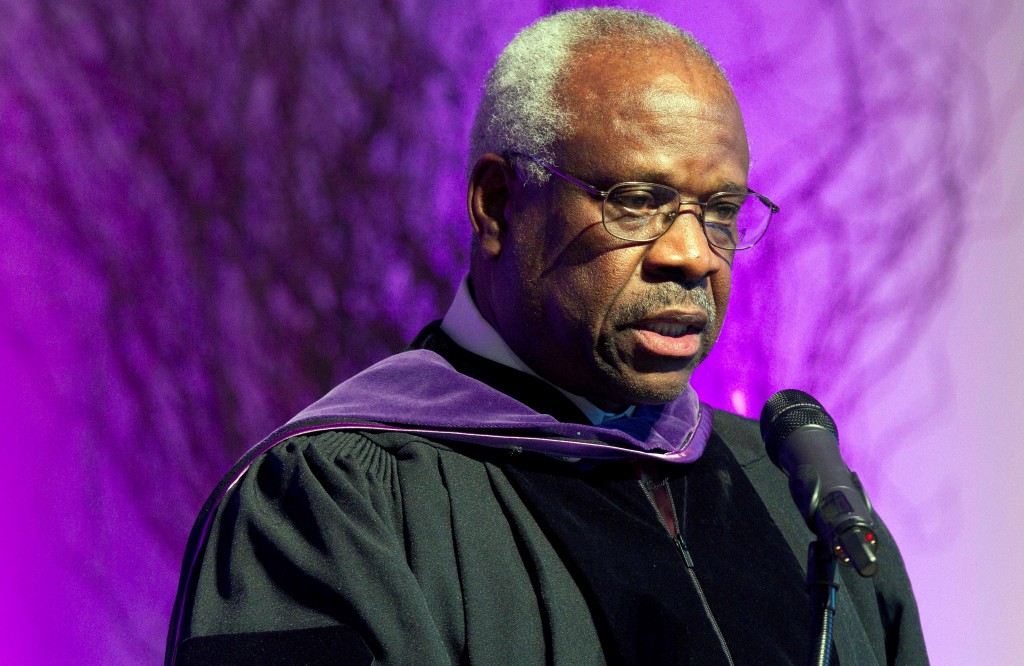 Justice Clarence Thomas broke 10 years of silence and provoked audible gasps at the Supreme Court on Monday when he posed questions from the bench during an oral argument.

In a case about a federal law that bans people convicted of domestic violence from owning guns, Thomas wanted to know of any other case where breaking a law suspends constitutional rights.

And it wasn’t just one question; it was a back-and-forth lasting a few minutes that stunned lawyers, reporters and others in the courtroom.

It was only the second week the court has heard arguments since the death of Justice Antonin Scalia, Thomas’ friend and fellow conservative.

Thomas for seven years sat next to Scalia, who was famous for aggressive and sometimes combative questions from the bench. Scalia’s chair is now draped in black in a tribute to his death on Feb. 13.

With about 10 minutes left in the hour-long session, Justice Department lawyer Ilana Eisenstein was about to sit down after asking the justices if there were no further questions. Thomas then caught her by surprise, asking whether a misdemeanor conviction of any other law “suspends a constitutional right.”

The sound of Thomas’ gravelly voice filling the courtroom prompted a few gasps among other lawyers attending the argument. None of the other justices visibly reacted to his remarks.

Thomas’s unusual silence has become a curiosity over the years. Thomas has previously said he relies on the written briefs and does not need to ask questions of the lawyers appearing in court.

Thomas last asked a question in court on Feb. 22, 2006. He has come under criticism for his silence from some who say he is neglecting his duties as a justice. Every other justice regularly poses questions from the bench, perhaps none more than the recently deceased Scalia.

Few reporters showed up Monday for arguments in the first case, in which the justices considered appeals from two Maine men who say their guilty pleas for hitting someone in a domestic violence case should not disqualify them from gun ownership. The men say the law should only cover intentional acts of abuse and not those committed in the heat of an argument.

During the first 50 minutes of the argument, most of the justices appeared to favor the government’s position that even reckless acts of domestic assault fall under the law. Thomas did not pose questions to Virginia Villa, the lawyer arguing on behalf of the two men.

But Thomas peppered Eisenstein with several questions about Second Amendment gun rights, a topic no other justice had asked about. He noted that the law allows someone convicted of a misdemeanor assault charge to get a lifetime ban on possessing a gun “which at least as of now results in suspension of a constitutional right.”

“The suspension is not directly related to the use of a weapon?” Thomas asked.

Eisenstein said he was correct, but that Congress passed the law to prevent people accused of domestic violence from later using weapons against a family member. She noted that violating other laws can in some cases limit a person’s free speech rights. Thomas then asked how long the suspension of the right to own a firearm lasts.

Eisenstein said it was indefinite.

In one of the cases, Stephen Voisine pleaded guilty in 2003 to simple assault for a slap in the face while he was intoxicated. Then, in 2009, an anonymous caller reported that Voisine had shot a bald eagle with a rifle, and he was convicted under the gun law.