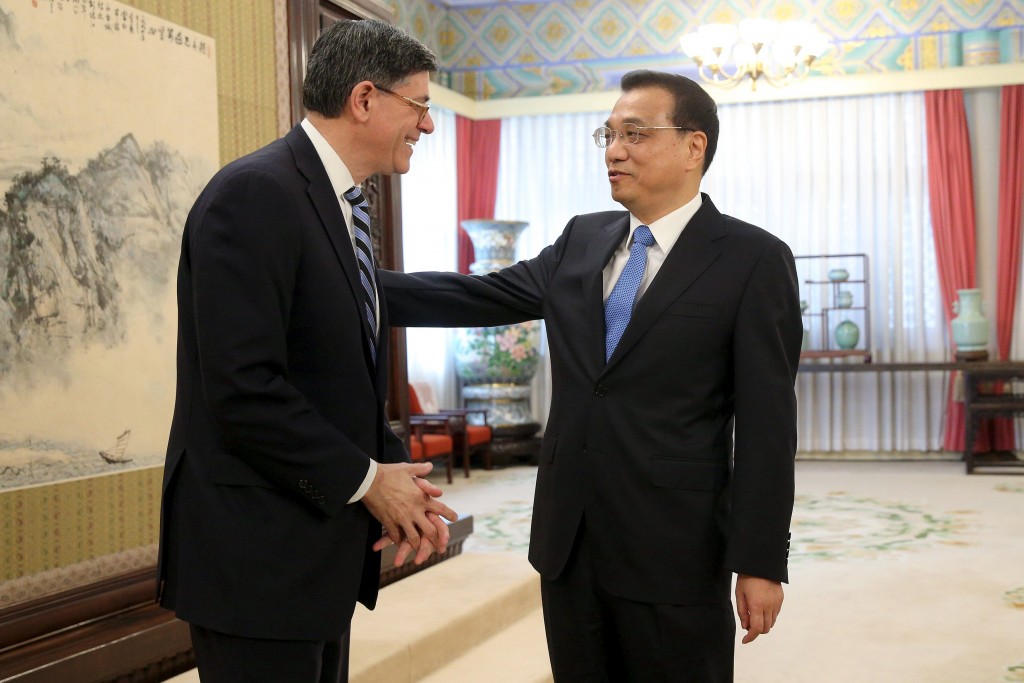 China’s premier told visiting U.S. Treasury Secretary Jacob Lew on Monday his government is pressing ahead with painful reforms to shrink bloated coal and steel industries that are a drag on its slowing economy and ruled out devaluing its currency as a short-cut to boosting exports.

Premier Li Keqiang’s comments to Lew on Monday were in line with a joint declaration by financial officials from the Group of 20 biggest rich and developing economies who met over the weekend in Shanghai. They pledged to avoid devaluations to boost sagging trade and urged governments to speed up reforms to boost slowing global growth.

Beijing is under pressure to reassure global financial markets it has its economy under control following stock and currency turmoil.

The G-20 finance officials’ assurance that global growth was still on track despite risks of a further deceleration appeared to fall flat: share prices fell in most Asian markets Monday, with the Shanghai benchmark dropping as much as 4.4 percent to close down 2.9 percent at 2,687.98.

Li told Lew that China is moving ahead with a long-range plan to reduce excess production in industries in which supply exceeds demand, according to a deputy Chinese finance minister, Zhu Guangyao. He said regulators would focus first on steel and coal, huge industries with millions of workers.

In a report in mid-February, the European Union Chamber of Commerce in China complained that the ruling Communist Party’s failure to eliminate unneeded production in industries including steel, cement and glass has worsened China’s economic slowdown.

Steel producers have responded to the glut by slashing export prices, hurting sales by foreign competitors. That prompted a protest Feb. 14 by thousands of steelworkers in Brussels, seat of the European Union.

The ruling party is in the midst of a marathon effort to replace a worn-out growth model based on trade, investment and heavy industry with a more self-sustaining expansion driven by consumer spending.

Growth in the world’s second-largest economy slowed last year to a 25-year low of 7.3 percent and is expected to decline further this year.

In coal, regulators expect to eliminate some 1.8 million jobs, the minister of human resources, Yi Weimin, said at a separate event Monday. That would be equivalent to about 17 percent of the 10.3 million people the China National Coal Association said last year are employed by the industry.

In steel, regulators have eliminated some 90 million tons of production capacity over the past three years and plan to close another 150 million tons in the next three to five years, according to Zhu. China’s steel production last year was about 800 million tons, or half the world total.

Beijing announced a 100 billion-yuan ($15 billion) fund last week to cushion the blow to workers who lose their jobs in the restructuring and help them find new jobs.

“We believe this fund will play a very important role in this process,” Zhu said.

Li affirmed Chinese pledges to avoid devaluing its yuan to boost exports, according to Zhu.

A key concern of financial markets, despite repeated Chinese denials, is that Beijing plans to allow its yuan to weaken further following a surprise introduction of a new mechanism in August to set its state-controlled exchange rate.

Lew urged Beijing to move toward a “more market-determined exchange rate in an orderly manner,” according to a Treasury statement.

The premier told Lew the yuan, also known as the renminbi, will be “basically stable” and subject to a “managed float” based on a basket of currencies, Zhu said.

“China does not intend to devalue the renminbi to engage in a trade war,” Zhu said.

The shift to what China’s central bank says is a more market-oriented exchange rate has allowed the yuan to drift lower against the dollar even as Chinese leaders said they had no plans for a “continuous devaluation.” On Monday, the yuan weakened by just under 0.1 percent from Friday’s close to 6.5478 to the dollar.