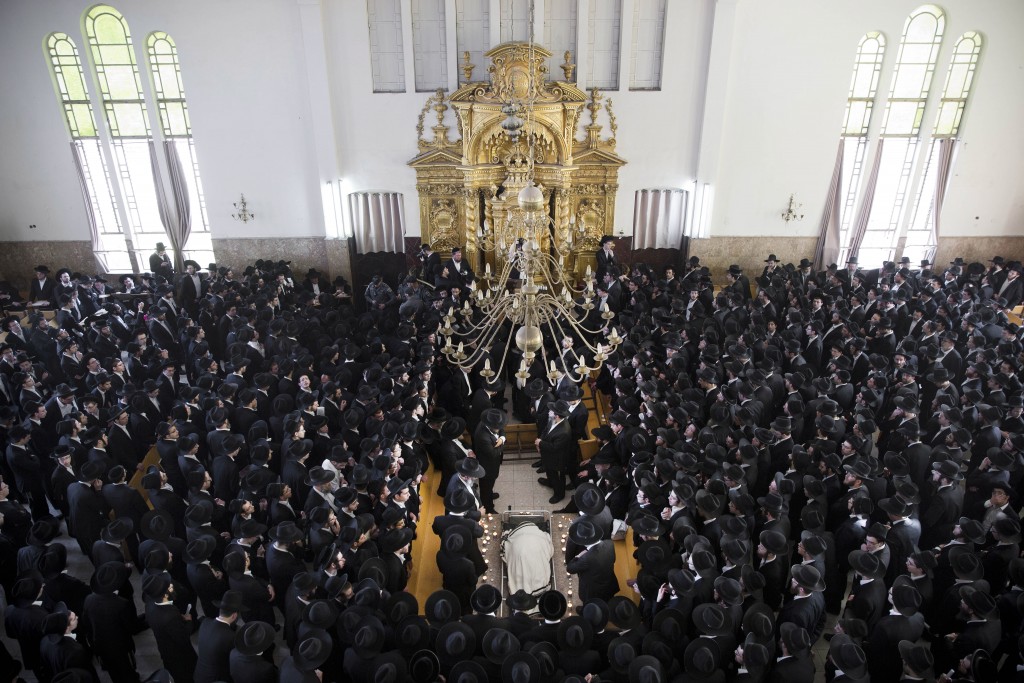 The Torah world is in mourning over the petirah of Hagaon Harav Chaim Shlomo Leibowitz, zt”l, Rosh Yeshivah, Yeshivas Kamenitz and Yeshivas Ponevezh, who was niftar Shabbos morning in the hospital.

Late on Motzoei Shabbos, the mitah of the Rosh Yeshivah was brought to his home in Bnei Brak. His talmidim tore kriyah, as per the halachah for one’s rebbi. The talmidim recited Tehillim throughout the night near the mittah.

Early Sunday, the mitah was brought into the main beis medrash of Ponevezh Yeshivah in Bnei Brak.

Many thousands gathered in Ponevezh Yeshivah, and the crowd overflowed onto the nearby streets, with huge loudspeakers bringing the hespeidim to the crowd outside the building.

The levayah began at 12:00 noon, with the recitation of pirkei Tehillim, followed by the Thirteen Middos.

The first maspid was Hagaon Harav Gershon Edelstein, shlita, Rosh Yeshivah, Yeshivas Ponevezh, who began by saying that Reb Chaim Shlomo was a link in the chain of the mesorah from the Vilna Gaon since he was a grandson of Reb Baruch Ber Leibowitz, the Birkas Shmuel, who was a close talmid of Reb Chaim of Brisk and the Beis HaLevi, who were the talmidim of Reb Chaim Volozhiner, the prize talmid of the Vilna Gaon. “The Torah that he disseminated, here and in any other yeshivah, was the Toras HaGra. Reb Chaim Shlomo was unique in his Torah and his middos; he excelled in the forty-eight maalos of the Torah in all his ways,” said Harav Edelstein. “In this, he emulated the Vilna Gaon.”

The next maspid was Hagaon Harav Baruch Dov Povarsky, shlita, Rosh Yeshivah, Yeshivas Ponevezh, who noted that not only was Reb Chaim Shlomo the grandson of Reb Baruch Ber, but he also was unique in that he instilled the famed derech halimud of his grandfather in today’s generation. He also transmitted the derech halimud of Brisk, since he was a close talmid of the Brisker Rav, Harav Velvel, zt”l. Reb Chaim Shlomo was one of the first three talmidim of the Brisker yeshivah in Yerushalayim, founded by Harav Yosef Dov (Reb Berel), zt”l. (It is known – until today – that there is never a shiur given in Brisk on Wednesdays, since that was the day Reb Chaim Shlomo would go to his father’s shiur, in Yeshivas Kamenitz, and Reb Berel would say, if Reb Chaim Shlomo isn’t present at the shiur, I have no one to say the shiur to…) “Reb Chaim Shlomo’s entire guf became neshamah, and thus the neshamah had no reason to leave the guf, until, due to our aveiros,” bemoaned Harav Povarsky, “the Rosh Yeshivah was niftar.”

Hagaon Harav Baruch Mordechai Ezrachi, shlita, Rosh Yeshivah, Yeshivas Ateres Yisrael, and a chavrusa of Reb Chaim Shlomo from their years in Yeshivas Chevron, spoke next. He related that already as a young bachur, Reb Chaim Shlomo would help his father, Reb Yaakov Moshe, prepare the shiur klali. From youth, he devoted himself entirely to limud haTorah.

The last maspid at Yeshivas Ponevezh was the son of Reb Chaim Shlomo, Harav Yaakov Moshe Leibowitz, who serves as Ram in Yeshivas Be’er HaTorah in Yerushalayim.

Many Gedolei Yisrael participated in the levayah in the streets of Bnei Brak; notable among them: Hagaon Harav Aharon Leib Steinman, shlita, Hagaon Harav Chaim Kanievsky, shlita, as well as many Rabbanim, Rebbes and Roshei Yeshivah.

After that, the mitah was taken to Yerushalayim, where thousands awaited the levayah in front of the Kamenitz Yeshivah building.

From there, the levayah continued to Har Hamenuchos, where the Rosh Yeshivah was buried.