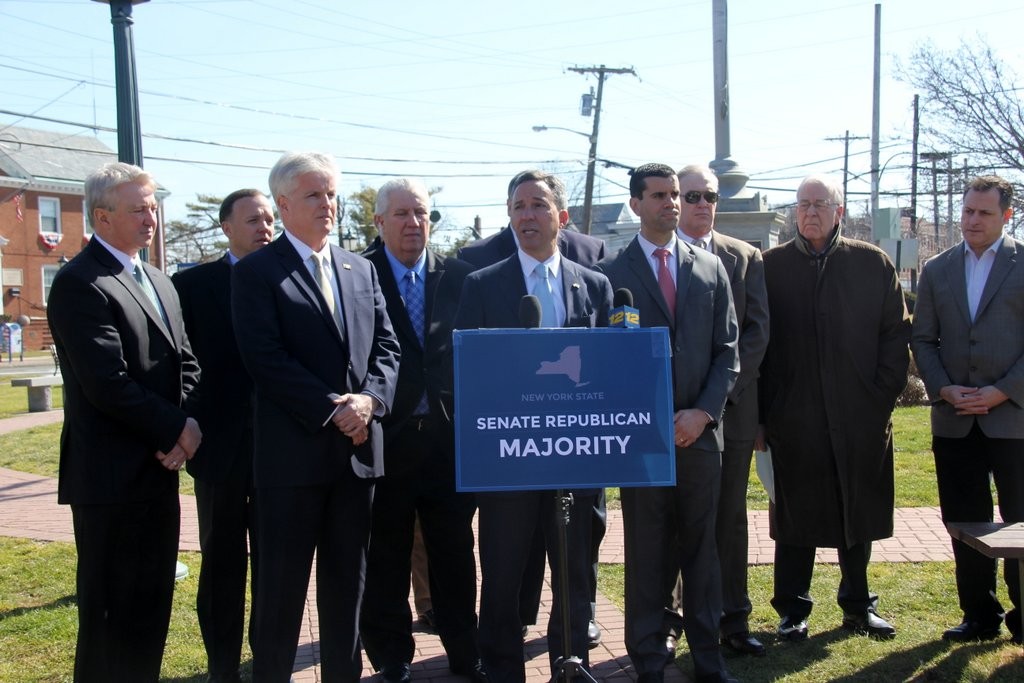 Members of the New York State Senate Republican majority held a rally on Sunday, calling for the State Assembly to pass anti-BDS legislation that the Senate passed last month.

Participants at the rally, held at Andrew J. Parise Park in Cedarhurst, called on the Democrat-led Assembly to pass law S.6378A/A.9036, which prohibits the state from doing business with any companies or individuals that are involved in the movement to boycott, divest and sanction Israel (BDS). The rally was attended by State Senators Jack Martins, Kemp Hannon, Carl Marcellino, Phil Boyle, Tom Croci, Michael Venditto, and Chris McGrath, candidate for the Special Election in the New York State Senate’s Ninth District, along with local elected officials and community members, according to a press release issued by the State Senate GOP.

Senate Majority Leader John J. Flanagan said, “New York taxpayers should be protected from becoming unwitting supporters of those who are trying to undermine our greatest ally, Israel, and other critical allies. Today, the Senate Republican Majority is once again demonstrating that we will continue to stand with our international partners and protect our shared national interests. The Assembly must join us in this fight.”

Senator Jack M. Martins, the bill’s sponsor, said, “Actions speak louder than words. Over a month ago, Republicans and Democrats in the Senate overwhelmingly passed legislation to prevent taxpayer dollars from aiding those who attack our allies; the Assembly has done nothing. Every day they fail to act is another day they enable others to use state resources to harm Israel. It’s time for the Assembly to join us in making this a priority and sending a strong message that New York State supports Israel and our other allies who have continually supported us.”

New York State law already prohibits the state from directly engaging in an international boycott against American-allied nations, and New York City has a similar prohibition as part of its administrative code. However, the new legislation would ban the state from making any contracts with or investments in any companies or individuals that are involved in Israeli boycotts.

In the press release, the Senate GOP said that passing the legislation “would prevent the state from becoming unwilling participants in a discriminatory agenda.”