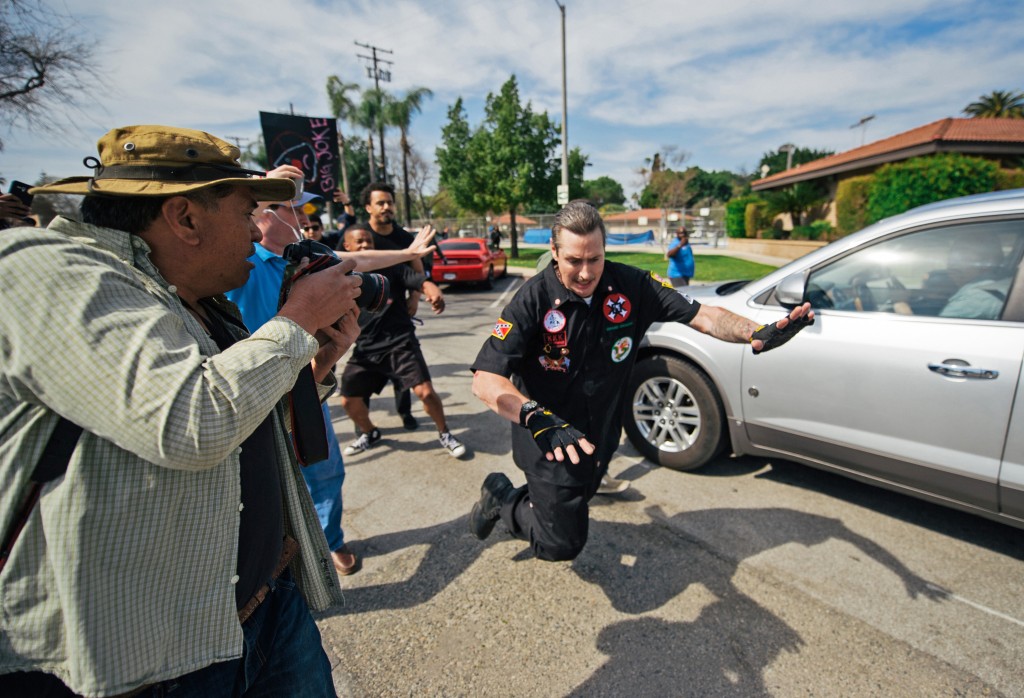 Dozens of protesters who heard about a planned Ku Klux Klan rally were waiting by a Southern California park when six Klansmen pulled up in a black SUV and took out signs reading “White Lives Matter.” The KKK members were dressed in black shirts decorated with the Klan cross and Confederate flag patches.

The protesters immediately moved in, surrounding the Klansmen. Someone smashed the SUV’s window, and then mayhem ensued.

Witness video captured the brawl just after noon Saturday in an Anaheim park about 3 miles from Disneyland. Several protesters could be seen kicking a KKK member. One Klansman with an American flag used the pole’s tip to stab a man.

By the time ordered was restored, three people had been stabbed, one critically. Five Klansmen were booked for investigation of assault with a deadly weapon, and seven of the approximately 30 counter-protesters were arrested on suspicion of assault with force likely to cause great bodily injury.

“I thought they were going to stomp these Klansmen to death,” said Brian Levin, who directs California State University, San Bernardino’s Center for the Study of Hate and Extremism. Levin, who was monitoring the protest, tried to get between counter-protesters and Klansmen until officers were able to reach the scene.

Levin said he saw no uniformed officers when the melee started. Sgt. Daron Wyatt says police were definitely there and were engaged with people at one end of the fight, and called for additional resources to deploy to the other end. He says the event stretched along an entire city block.

Police Chief Raul Quezada said his officers were able to respond quickly enough to arrest all but one of the main participants, with the exception of one counter-protester who was still at large Sunday. Four of the arrestees were released after a review of video evidence, he said Sunday in a statement from the city.

“We will always honor free speech in Anaheim, but we vehemently reject hate and violent confrontation,” Mayor Tom Tait said. “Anaheim is proud to draw strength in its diversity, tolerance and kindness, and Saturday’s events run counter to that.”

A day earlier, Anaheim police had notified the public about the planned protest at Pearson Park and said they would be monitoring the situation. The department also noted that the KKK, like any other group, has a First Amendment right to assemble and demonstrate in a public park.

“Even if the vast majority of our community disagrees with a particular group who visits our city, we cannot stop them from lawfully gathering to express their opinions,” Quezada said. “Violence is not acceptable, and we will arrest anybody who assaults another person or commits any other crime in our city.”

Chris Barker, who identified himself as the imperial wizard of the Loyal White Knights of the Ku Klux Klan, told The Associated Press by phone from North Carolina that his members were holding a peaceful anti-immigration demonstration and acted in self-defense.

“If we’re attacked, we will attack back,” said Barker, whose organization lists Pelham, N.C., as its headquarters. Last year, the group drew headlines when it protested the removal of the Confederate flag from the South Carolina Capitol.

The KKK has a long history in Anaheim. In the 1920s, several Klansmen held elected office in the city, which was overwhelmingly white but now has a majority of Hispanics among its roughly 350,000 residents.

In January 2015, packets containing fliers condemning the Rev. Martin Luther King Jr. and supporting the Ku Klux Klan were left in the driveways of about 40 homes in Santa Ana, about 8 miles south of Anaheim.

Nationwide, the number of active KKK groups increased to 190 in 2015 after falling in 2013 and 2014, according to the Southern Poverty Law Center, which tracks hate groups.