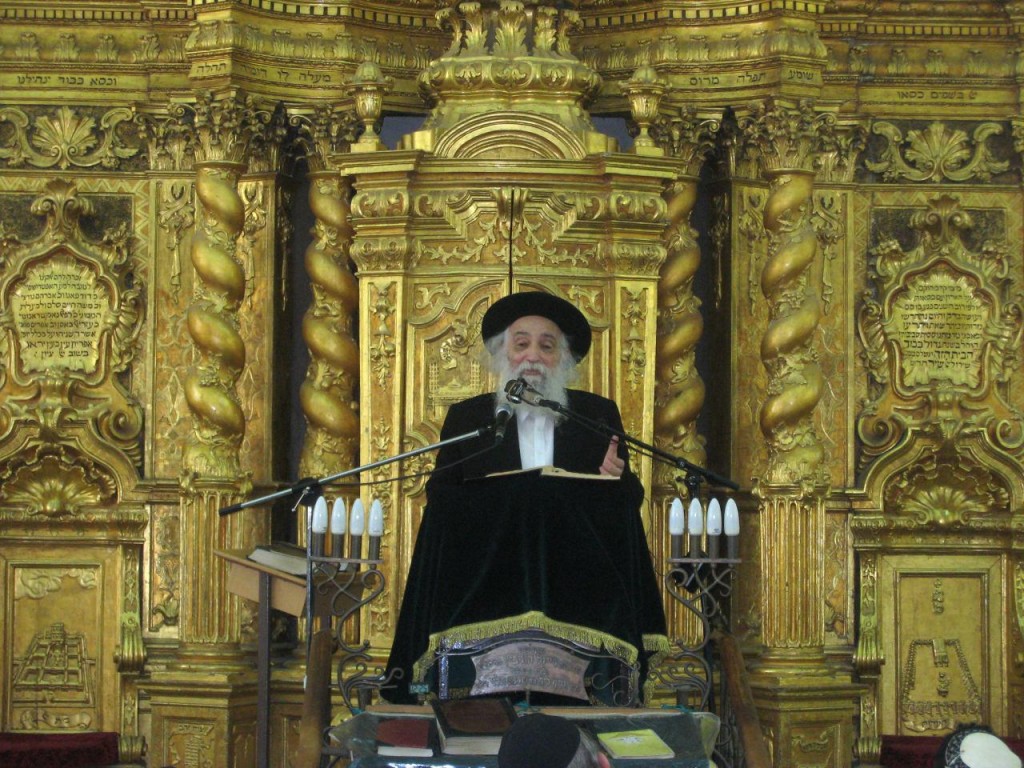 The name of the Rosh Yeshivah, Harav Chaim Shlomo ben Tzeita Leah, was on the lips of his many talmidim ever since he was hospitalized due to hemorrhaging. At times, it seemed as if his condition was improving, but at the end of the week, his condition took a turn for the worse, and he was niftar on Shabbos.

After the end of Shabbos, when the news reached the yeshivah, the paroches was pulled aside, as a sign of mourning. The levayah of the Rosh Yeshivah will be held Sunday at 12:00 noon, from the Ponovezh Yeshivah in Bnei Brak, where the Roshei Yeshivah, shlita, and family members, will be maspid.

From there, the levayah will continue to Yerushalayim, passing Yeshivas Kamenitz, en route to Har Hamenuchos, where he will be buried near the kever of his father.

Harav Chaim Shlomo was born in 5693/1933, in Baranovich, Belarus. His father, Harav Yaakov Moshe, was the son of Hagaon Harav Baruch Ber Leibowitz, zt”l, famed Rosh Yeshivah of Kamenitz and author of Birkas Shmuel on Shas. As a child, Rav Yaakov Moshe would participate in the shiurim of his father in Yeshivas Slabodka. He later learned in the yeshivah in Radin, and later in Yeshivas Chevron in Eretz Yisrael.

When he became of age, Rav Yaakov Moshe married Rebbetzin Tzeita Leah, the daughter of Harav Moshe Ber Movshovitz, the Rav of Lachovitz.

At the outbreak of World War II, the family fled to Vilna. In 5700/1940, after the petirah of his father, Reb Baruch Ber, Reb Yaakov Moshe managed to flee Europe to Eretz Yisrael, on a ship that also carried other Roshei Yeshivah, including Harav Elazar Menachem Shach and Harav Dovid Povarsky, zt”l.

In Yerushalayim, Rav Yaakov Moshe, together with his brother-in-law, founded Yeshivas Kamenitz, where he served as a Rosh Yeshivah.

From his earliest years, Rav Chaim Shlomo was noted for his sharp mind. His father hired a private melamed for his son, as he was way above the level of any Talmud Torah.

He entered Yeshivas Chevron in Yerushalayim at the age of 12, and he also heard shiurim from the Brisker Rav, Harav Yitzchak Ze’ev Soloveichik.

It is related that once during a shiur of Hagaon Harav Aharon Kotler, zt”l, in Eretz Yisrael, the young Chaim Shlomo asked a question. Reb Aharon, astounded by the profound question, asked for the name of the questioner. When he was told it was the bachur Chaim Shlomo Leibowitz, a grandson of Reb Baruch Ber, he replied, “so then it is all understood…”

In 5717/1957, he married, tbl”c, Rebbetzin Sima, the daughter of Rav Avraham Yitzchak Rothstein, noted manager of the Diskin orphanage in Yerushalayim, a close confidant of many Gedolei Yisrael, notably the Chazon Ish.

Following the passing of his father, in 5724/1964, Reb Chaim Shlomo was appointed Rosh Yeshivah in Yeshivas Kamenitz, where he taught multitudes of talmidim over the next few decades.

His derech halimud was that of his illustrious grandfather, Reb Baruch Ber, which he instilled in his talmidim.

In Elul of 5765/2005, Rav Chaim Shlomo was appointed to serve as Rosh Yeshivah in Yeshivas Ponevezh in Bnei Brak. He later moved to Bnei Brak, living near the yeshivah.

In recent years, a compilation of his shiurim on various masechtos was released, under the name Shiurei HaGraChaSh.

Rav Chaim Shlomo suffered great losses in his life, with two of his children predeceasing him. His son Harav Chizkiyahu Yosef, z”l,was niftar several years ago, while his daughter, Rebbetzin Keila Rivkah Schwartzman, a”h, was niftar just a few months ago.

Despite all his personal hardships, Rav Chaim Shlomo always strengthened himself in Torah.