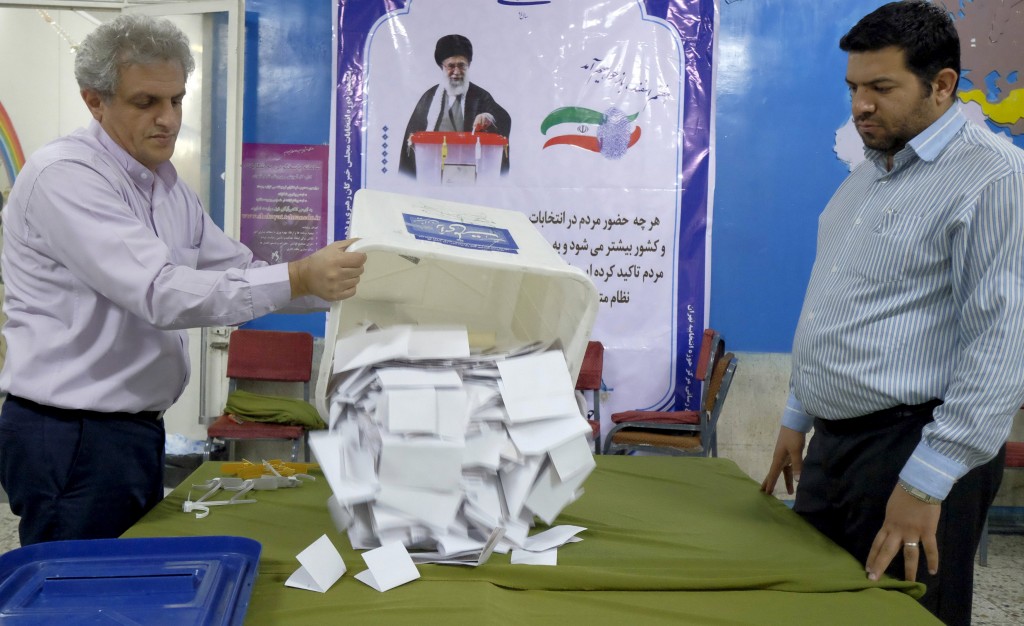 Partial election results in Iran on Saturday point to major gains by reformists and moderates who favor expanding freedoms and engaging with the West, and who defended the recently implemented nuclear deal with world powers against opposition from hard-liners.

Friday’s election was the first since last summer’s agreement was finalized, lifting international economic sanctions in exchange for Iran curbing its nuclear program. U.S. officials had hoped the deal would strengthen President Hassan Rouhani and other moderates, paving the way for greater cooperation on other regional issues.

Reports in the semi-official Fars and Mehr news agencies showed hard-liners losing ground in the 290-seat legislature. None of Iran’s three main political camps – reformist, conservative and hard-line – was expected to capture a majority, but the reformist camp is on track for its best showing in more than a decade.

Reformist candidates were set for major gains in Tehran, which sends 30 representatives to the chamber and is seen as a political bellwether. Partial results released by the government showed 26 reformists among the 30 front-runners and just one hard-liner.

Mohammad Reza Aref, the most prominent reformist candidate, was at the top of the list, and the sole hard-liner, Gholamali Haddad Adel, was 10th. Some 1.3 million ballots have been counted in Tehran, where turnout is expected to exceed the 2.6 million who voted in 2012.

Partial results from Tehran showed moderates also gaining ground in the 88-member Assembly of Experts, which will select the successor to 76-year-old Ayatollah Ali Khamenei, Iran’s top decision-maker since 1989.

Rouhani and former President Akbar Hashemi Rafsanjani, a relative moderate, led in Tehran, which will send 16 candidates to the assembly, the official IRNA news agency reported. Just two hard-liners are currently among the 16. The current assembly has six hard-liners from Tehran.

IRNA initially reported the Assembly of Experts results as final, but later both IRNA and state media said they were based on a partial tally.

Both Rouhani and Rafsanjani currently sit in the assembly, which is elected every eight years and at present includes around 20 moderates. There were no immediate results from other constituencies, and vote counting was still underway.

The final results from the elections are expected on Monday.

In a statement, Rouhani thanked Iranians for taking part in the election and urged unity, calling for a “new chapter in the growth of the national economy by using domestic strength and foreign opportunities,” a reference to Iran’s openness to foreign investment now that sanctions linked to its nuclear program have been lifted.

Iran has dozens of political groupings and organizations, but no major, longstanding parties like in the West. Broadly speaking, the election is a showdown between hard-liners in one camp, and relative moderates supporting Rouhani and reformists on the other. There are also independent conservatives not aligned with either bloc.

Nearly 55 million of Iran’s 80 million people were eligible to vote. Participation figures were not immediately available, but Interior Minister Abdolreza Rahmani Fazli on Saturday said turnout likely exceeded 60 percent based on the partial counting of the votes.

Polls closed at midnight and officials immediately began counting the ballots. In the capital, officials counting the ballots in three different districts told The Associated Press that reformists were leading their hard-line rivals. The officials requested anonymity because they were not authorized to speak with reporters.

A substantial reformist bloc could herald a major shift in Iran’s internal politics. The hard-line camp is largely made up of loyalists of Rouhani’s predecessor, Mahmoud Ahmadinejad, who during his two terms in office stoked tensions with the U.S. and cracked down on dissent. Ahmadinejad also alienated large sectors of the conservative camp, leading some moderate conservatives to ally with reformists in this election in a bid to reduce the power of the hard-liners.

Reformists last rose to power with the 1997 election of President Mohammad Khatami, followed by 2000 parliamentary elections that brought a reformist majority for the first time. The movement pressed for an easing of Islamic social restrictions, wider freedom of expression and better relations with the West.

But their hold on power was broken in the next election in 2004, when reformist candidates were largely barred from running. Ahmadinejad’s victory in 2005 sealed the movement’s downfall. Reformists were virtually shut out of politics until Rouhani was elected in 2013.

The presidential election in 2009 was followed by mass protests over alleged voting fraud, but other past elections in Iran have been held without any major disputes. However, the Guardian Council has the right to vet candidates, and this year it disqualified all but 200 of the 3,000 reformist candidates who had hoped to run.