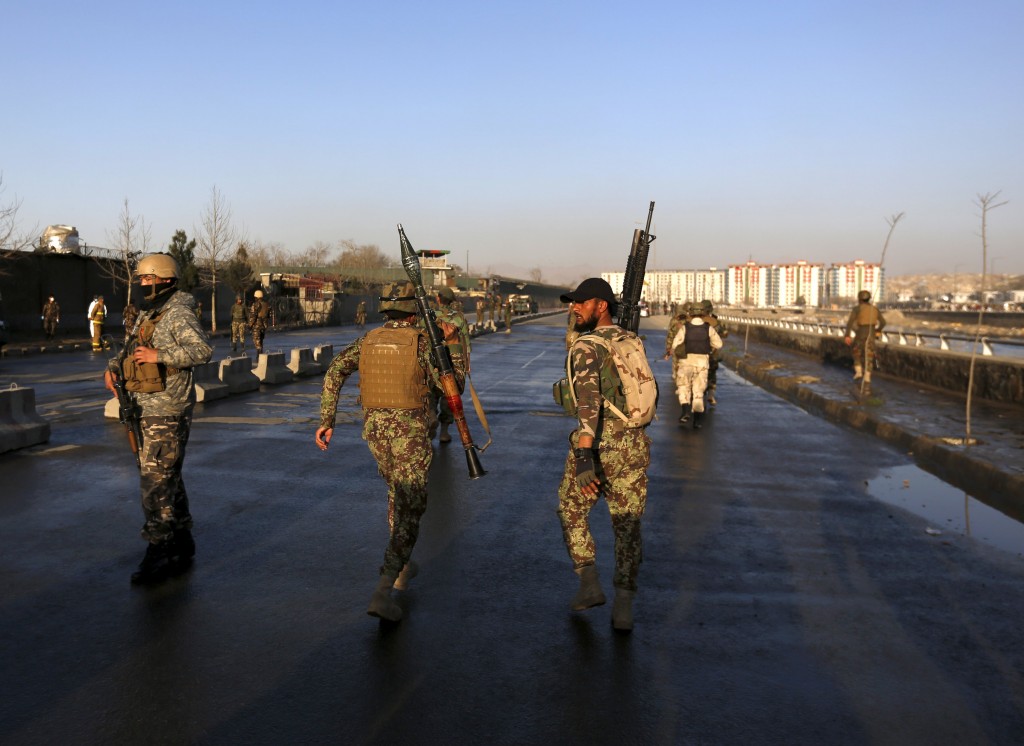 A Taliban suicide bomber blew himself up near the Afghan defense ministry in Kabul on Saturday, causing heavy casualties just hours after an attack in the eastern province of Kunar killed 13 people and put prospects for new peace talks in doubt.

The attack in Kabul killed 15 people and wounded 33, most of them defense ministry staff leaving their offices, according to ministry spokesman Dawlat Waziri.

Witnesses at the scene, where a large plume of smoke spiraled into the sky, said they had seen a number of bodies on the ground. The area was sealed off as police and army vehicles surrounded the blast site.

“I wanted to cross the bridge when I heard an explosion,” said a witness who gave his name as Zulgai. “I went to the area and saw as many as 30 people killed and wounded. There were damaged cars and shattered windows everywhere,” he said.

The Taliban claimed responsibility for the attack, which the movement’s spokesman Zabihullah Mujahid said had killed 23 officers and wounded 29 others. He said there were no civilian casualties.

The high-profile attack came as officials from Afghanistan, Pakistan, the United States and China have been pressing for a resumption of the peace process, interrupted last year, between the Western-backed government in Kabul and the Taliban.

But it remains unclear whether the Taliban, struggling to contain deep internal divisions, will take part in direct peace talks that the four-nation group hope will be held in Islamabad as early as next week.

In a statement issued after the attack in Kunar, President Ashraf Ghani said his government would not conduct peace talks with groups that killed innocent people and said security forces would step up the fight against terrorism.

The Taliban, fighting to restore hardline Islamist rule in Afghanistan, has conducted a series of attacks in Kabul and other areas this year and has pressed its military campaign in the southern province of Helmand, where it has forced government troops to pull out of a number of districts.

Earlier on Saturday, a suicide bomber killed a local militia commander and at least 12 others outside the governor’s compound in Asadabad, the provincial capital of Kunar, near the border with Pakistan.

Provincial Governor Wahidullah Kalimzai said the bomber rode up on a motorcycle to the entrance of the compound and blew himself up, wounding at least 40 people.

“Most of the victims were civilians and children who were either passing by or playing in the park,” he said.

There was no immediate claim of responsibility but the apparent target of the attack, a tribal elder and militia commander named Haji Khan Jan, was among the dead.

He had been closely involved in a number of operations against the Taliban in his district last year.